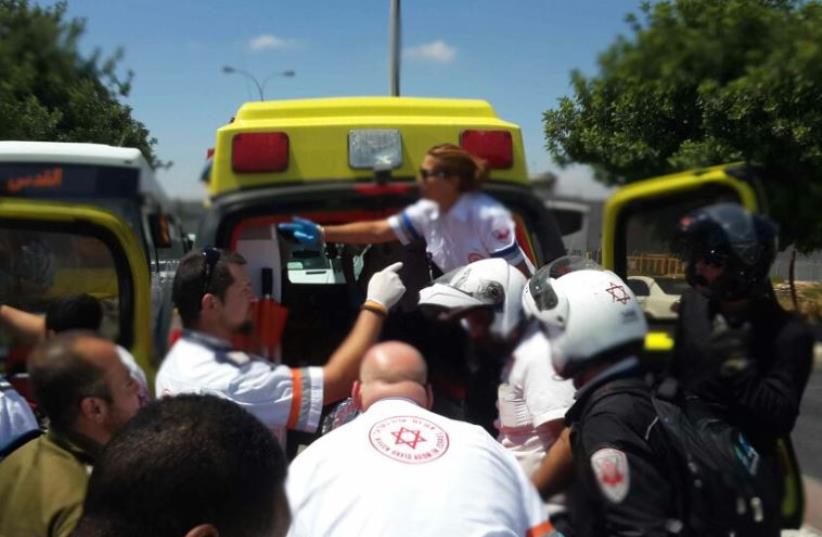 Scene of stabbing attack
(photo credit: MDA)
Advertisement
A female IDF Military Police officer sustained moderate- to-serious wounds after being stabbed in the neck Monday morning at the south Jerusalem security checkpoint Rachel’s Crossing, in what police are deeming a terrorist attack.According to police spokesman Micky Rosenfeld, the assault took place a few minutes after 11 a.m. when the female suspect, identified as 20-year-old Misun Musa, a resident of Bethlehem, lunged at the 20-year-old officer, impaling her neck with the blade.The suspect was then detained after a brief chase.The officer was immediately treated at the scene by Magen David Adom paramedics and rushed to Hadassah University Medical Center in Ein Kerem for treatment, Rosenfeld said.MDA paramedics Eyal Zehavi and Eldad Benstein said that when they arrived at the scene, the victim was fully conscious, but in great pain.“We gave her life-saving medical treatment that included stopping the bleeding, bandaging and fluid intake, and then anesthetized her,” they said in a joint statement.After arresting the terrorist, police found two more knives in her handbag and cordoned off the area to search for other suspects to determine she had acted alone, Rosenfeld said.Israeli security forces later said she confessed under interrogation that her intention was to kill an IDF soldier. The suspect had not been known to security forces and had no previous arrests.The attack comes one week after a Border Police officer stationed near the Damascus Gate was critically wounded after being stabbed in the neck and chest by a Palestinian terrorist he then shot.The officer, who underwent emergency surgery at Shaare Zedek Medical Center in Jerusalem has since been upgraded to serious-but-stable condition.Also on Monday, Military Police arrested a 15-yearold Palestinian boy armed with a submachine gun who attempted to pass a Shuafat security checkpoint in northern Jerusalem during the early hours of the morning.According to police, the unidentified teen entered the checkpoint shortly before 3 a.m. to gain passage to central Jerusalem, and when he passed through a metal detector, officers found a lightweight automatic Carl Gustav machine-gun concealed under his sweatshirt, jutting out of the waistline of his pants, police said.Military Police Officer Corp. Daniel Malka disarmed the teen and placed him under arrest before he was transferred to a holding facility for questioning in Jerusalem.The teen was later arraigned at Jerusalem Magistrate’s Court, where a judge ordered him remanded for several days pending an investigation into how he procured the weapon and whether he had accomplices.Lt.-Col. Gil Mamon, commander of the Military Police’s Erez Battalion, praised Malka for quickly disarming the suspect and averting a deadly scenario.“The battalion works throughout the year with a goal of capturing terrorists and weapons, and preventing their entry into the State of Israel,” Mamon said in a statement.“Battalion fighter Corp. Daniel Malka showed alertness and functioned with professionalism, as is expected of him, and we appreciate and are proud of that.”
Knife used in attack (Photo credit: Police)