Terrorist who ran down 4 Border Police officers, civilian, sentenced to 25 years in prison 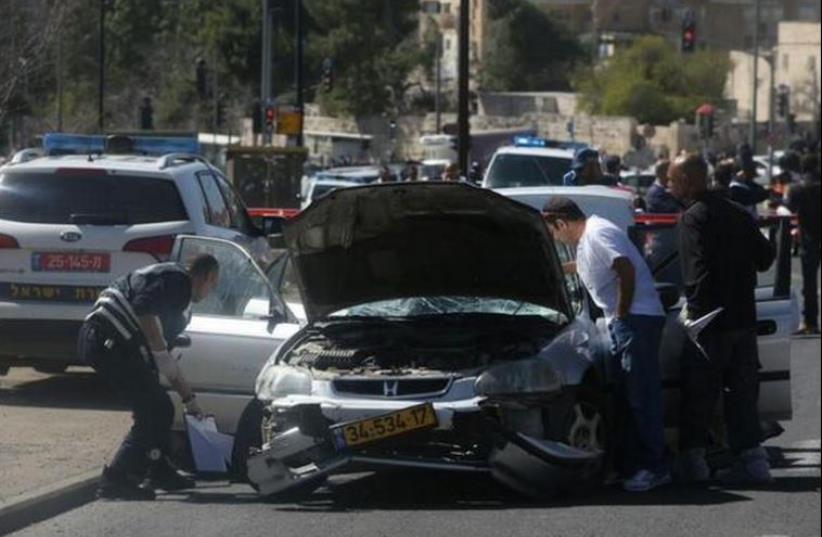 Car ramming attack in Jerusalem, March 6
(photo credit: MARC ISRAEL SELLEM)
Advertisement
Arab terrorist Mohammed Salaimeh, 22, of east Jerusalem, was convicted on Sunday in Jerusalem Magistrate’s District Court of five counts of attempted murder for ramming his car into four female Border Police officers and a male civilian in the capital last March.As part of a plea bargain, the court sentenced Salaimeh, to 25 years in prison, and to pay NIS 260,000 for damages incurred by the attack. It remains unclear how, or to whom, the money will be allocated.On March 6, Salaimeh drove his vehicle into the group – lightly-to-moderately wounding all five – before being shot twice upon exiting the car while wielding a large meat cleaver in an attempt to attack more victims.The Purim-morning attack took place outside the capital’s Border Police headquarters.After being treated at an area hospital, Salaimeh, who resides in the Arab neighborhood of Ras el-Amud, confessed that the attack was premeditated, and that he intended to kill as many Jews as possible.Following the attack, Hamas’s spokesman Sami Abu Zuhri posted a statement on his Facebook page lauding the terrorist, but did not claim responsibility.“The Hamas movement blesses this historic act and considers it a natural response to the occupation’s