Since 1994, Othniel has lost 12 people in terror or terror related incidents, 7 of them on that road. 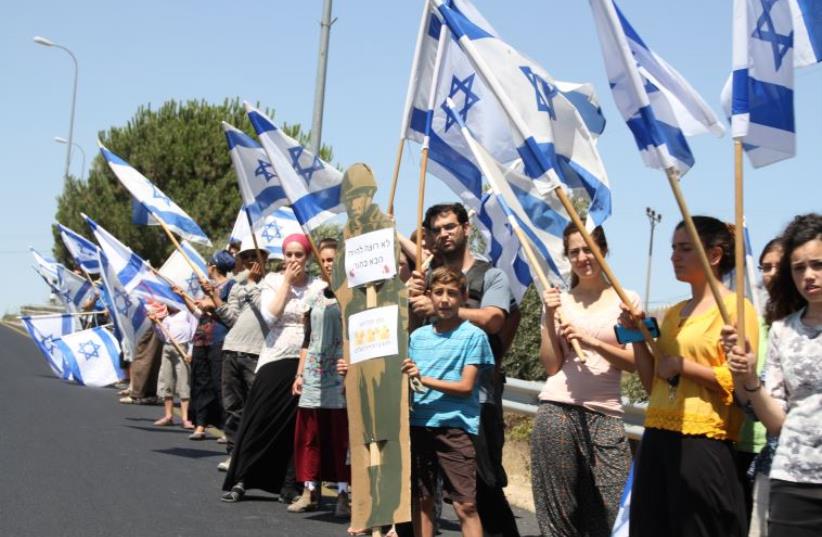 Settlers protest dangerous West Bank Roads
(photo credit: JACK BRADY)
Advertisement
Palestinian terrorists have killed 25 people in 22 years along a 16-kilometer stretch of Route 60 in the South Hebron Hills. The latest victim was Rabbi Michael Mark, who was shot to death as he drove with his wife and two of his children from their home in the Otniel settlement to Jerusalem on July 1.If South Hebron Hills Regional Council head Yochai Damri could have spoken with Prime Minister Benjamin Netanyahu last week, he probably would have asked him one question: “Can you promise me this won’t happen again?” The South Hebron Hills region, which has only some 10,000 inhabitants, is one of the more isolated and barren regions of the West Bank. The bulk of it is located outside the planned route of the security barrier.Route 60, stretching from Jerusalem to Beersheba, has seen its share of terrorist attacks, particularly around the Gush Etzion junction, where five people have been killed in the last eight months. The road becomes particularly dangerous when it splits into Route 356, past Kiryat Arba, and drivers who want to stay on Route 60 must bear right.From that moment, and for some 16 kilometers until drivers reach the Otniel settlement, the possibility of a terrorist attack increases, Damri said, chalking it up to the high Palestinian population living along the road, which passes the back end of Hebron and winds through a number of Palestinian villages.It is easy for Palestinians to access the road, either by car or foot, and then disappear, he said. The road is not lit at night and most of that stretch lacks cellular coverage, he said.Should an attack happen, the victims cannot call for help.If the IDF wanted, it could take three easy steps to make the route safer, Damri said: Checkpoints could be placed at the Route 356 intersection and again past Otniel; a cellular tower and street lights could be erected, he said.Shlomo Vaknin, who is head of security for the Council of Jewish Communities of Judea and Samaria, said security cameras are also needed along the road. It is also important to make improvements to the road, so traffic can flow better, he said.Four of the 40 victims in the wave of violence that began in mid-September were killed on that section of Route 60, including Rabbi Yaakov Litman, 40, and his son, Netanel, 18, who were shot to death November 13.On October 20, Avraham Asher Hasno, 54, who was in charge of the kitchen at the yeshiva in Otniel, was killed as he drove to his home in nearby Kiryat Arba. Palestinians had blocked the highway with burning tires and pelted his car with stones, so he would pull over. When he got out of his vehicle, he was fatally hit by a passing truck.Five other Otniel residents also were killed by Palestinian terrorists as they drove on that stretch of Route 60. These include Rabbi Amiran Olami, 34, murdered in November, 1994; Eliyahu Ben-Ami, 41, murdered in December, 2000; Avi Sabag, 24, murdered in March, 2002; and Aviad Mansour, 16, murdered in June, 2005.In January, a Palestinian teenager entered a home in Otniel and stabbed to death Dafna Meir, the mother of six.She lived just down the road from the Mark family.In 2002, two Palestinian gunmen infiltrated Otniel, killing four students in the yeshiva.Separately, Otniel resident Rabbi Daniel Mertzbach, 55, was killed in November, 2011, when the IDF accidentally shot at his car as he drove to the Tomb of the Patriarchs early in the morning.All told, Otniel, which has a population of about 1,000, has lost 12 people in terrorist- related incidents. Damri said his repeated pleas to the Defense Ministry and the Prime Minister’s Office for simple steps to lessen the dangers on that road have been ignored, Damri said.But this would not completely stop the terrorism threat, he said. The only way to stop terrorism is to eliminate the motivation for such attacks by exacting a price, Damri said.Families of the terrorists should be “relocated” to Gaza, Damri said. The government should also create more settlements and approve the building of new homes, not by the dozens, but by the thousands.“They are attacking us because they think they will frighten us,” he said, adding that this is the time to invest in the South Hebron Hills, particularly in Otniel.“The community will not return to normal so quickly, and I expect the government not to go back to business as usual,” Damri said.