'The bullet that pierced your heart shattered ours for eternity' 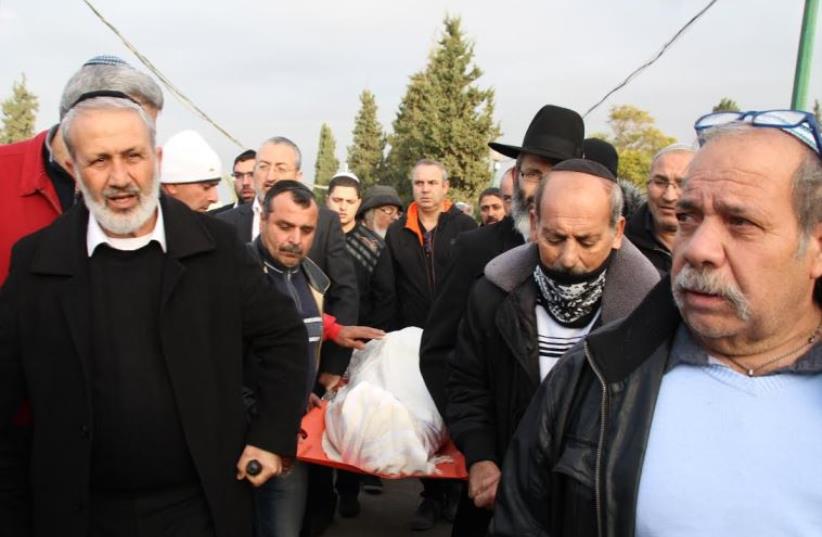 Shimon Ruime, a victim of Friday's Tel Aviv shooting, is buried in his home city of Ofakim.
(photo credit: TOVAH LAZAROFF)
Advertisement
Shimon Ruime survived the battlefields of Gaza and Lebanon but was killed in Friday's Tel Aviv shooting spree while celebrating a friend’s birthday.“You went through Gaza. You went through wars, but did not survive the bullet of unending hate. The bullet that pierced your pure heart — filled with love and happiness — shattered our hearts for eternity,“ said his aunt Mor Peretz as she eulogized him on Sunday in the small cemetery in his home city of Ofakim.Thousands of mourners stood around her as she clutched a hand-held microphone and spoke on behalf of the family about the young man nicknamed Shimi, who was fatally shot outside of the Simta Pub just one month before he turned 31. The pub's manager Alon Bakal, 26, was also killed in that attack and eight others were injured.“Instead of celebrating your birthday, we are burying you in the ground,” said Peretz. She wore a brown coat against the cold. Her long brown hair was pulled back in a pony tail."You came from dust and to dust you shall return," said the petite woman who called on God to avenge her nephew's death. Her words were greeted by screams and cries from the mourners.She described for them how the family had parted from Ruime's body before the funeral. They kissed him and told him that they loved him."I hope you heard us, I believe you did," she said.He was always at the center of the action. He loved life and all those who knew him loved him, said Peretz. The city of Ofakim and the nation as a whole is mourning her nephew's death, said Peretz.“You have become everyone’s son. Not a single eye is dry. We all refused to believe it was you. But the heart understood what our lips refused to say, that you were no longer with us” said Peretz.“God knew who to take, the one who was most precious and beloved, the jewel in the crown,” Peretz said.One of Ruime’s friends, Israel Avitan, said that Ruime was the life of the party. His motto was carpe diem, ‘seize the day,” said Avitan. “Parties without Shimi will not be the same,” said Avitan.He and Ruime were part of a group of five close friends who "did everything together," said Avitan. They were all at the pub on Friday, when an Israeli-Arab gunman attacked it."I am sorry that we were not able to save you," said Avitan.“You were taken from us in a moment when we were most enjoying ourselves. It was the start of a weekend, in which, as they say, we had no idea how it would end," said Avitan.“Shimi, in 25 days, you would have celebrated your 31st birthday,” said Avitan who had planed to attend that party as he and their friends had in years past.This year, they will also gather on that day, but this time at the cemetery and without Ruime, said Avitan.“But instead of laughing and drinking, we will cry over your grave,” he said.