The complicated process of picking olives in the West Bank

More than 100,000 Palestinian families rely to some extent on the income they generate from their olives and some 18% of Palestinian agricultural production comes from olives. 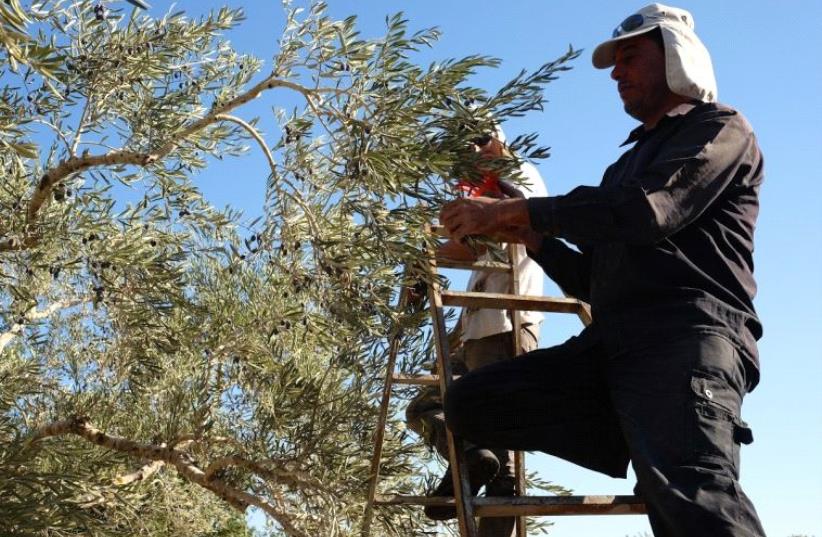 A member of the Ali family stands on a ladder to reach the olives in the uppermost echelons of a tree
(photo credit: SHAINA SHEALY)
Advertisement
Abdel Hafiz Ali, wearing a hat with extended flaps to block the sun, has helped his family pick olives all week, and plans to continue picking them until all of his family’s trees have been harvested.“I come every year because we depend heavily on the oil produced from these olives to make ends meet,” says Ali.More than 100,000 Palestinian families rely to some extent on the income they generate from their olives and some 18% of Palestinian agricultural production comes from olives. 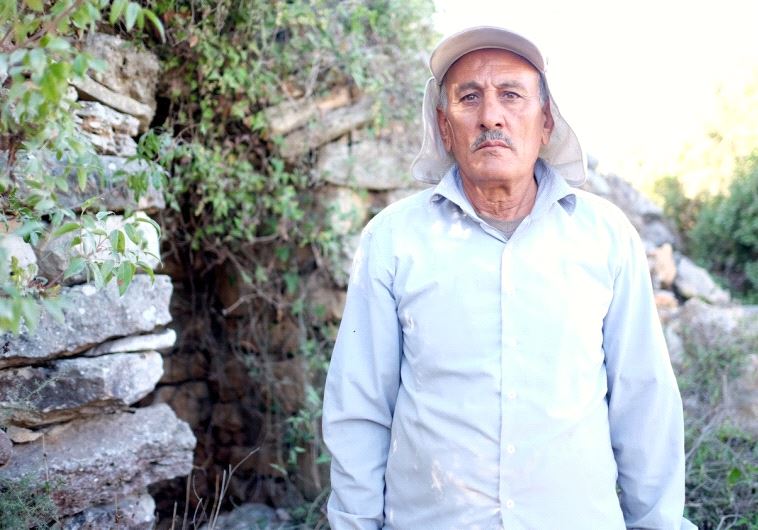 Abdel Hafiz Ali, a construction worker from Jamain, standing near his family's grove of olive trees (Shaina Shealy)
Ali, who usually works in construction, also believes that working with olives is a sacred practice.“Harvesting olives is holy work because they are mentioned in Surat al-Tin [the Fig Chapter] of the Koran, and our olive trees physically connect us to this land,” he says.It is the first Thursday of the olive harvest in the Nablus area, the West Bank’s second-most populous region. Thousands of Palestinian have taken vacation from work to wake up in the early hours of morning and hike with their families to their olive groves.Palestinian social media is replete with pictures of olive trees and dark-green olive oil, and radio stations are dedicating complete shows to the olive harvest. One well-known journalist in Nablus tells a local radio station, “May God bless all the farmers.”While some families in the Nablus region simply walk over to their trees near their homes and pick olives, most families have to trek outside of their immediate villages to open fields of olive trees, often adjacent to settlements.The Ali family, from Jamain, a village southwest of Nablus, is one of those families. It owns some 700 olive trees half way up a hill near the settlement of Tapuah Ma’arav.Ali, now standing on a ladder to reach olives in the uppermost branches of a tree, says that his family has recently invited a group of volunteers from Rabbis for Human Rights, an Israeli human rights organization, to serve as an extra line of protection. “We invited these volunteers to prevent settlers from harming us,” he remarks, stating further that they did exactly that on Sunday “when a settler threatened to attack [his] family with a bat.”A settler who resides approximately 100 meters from the tree where Ali is standing approached the Ali family on Sunday, yelling “leave my land” with a bat in hand. Yael Vargon, a Rabbis for Human Rights staff member immediately jumped in front of the settler, preventing him from coming any closer to the Ali family. Within a half hour, the Israeli police arrived and arrested the settler.Many olive trees in the West Bank including the Ali family’s trees lie in Area C, which means that Israel is responsible for providing security for Palestinians and Israelis there.The Samaria Regional Council said in a statement that while it is unaware of Sunday’s incident, it strongly opposes violence. “The council opposes any harm to the livelihood and property of another person. Such an act is against our morals as Jews and people,” the statement read. Ali says that he appreciates that the police arrested the settler, but emphasizes that “the Israeli security forces have not done enough to protect [his] family and trees during the olive harvest since the breakout of the second intifada [in 2000],” making it necessary for him to recruit the volunteers.In an email, an IDF spokeswoman did not address Ali’s specific complaint about less security since the second intifada, but said that the army “has sent reinforcements and undertaken required coordination to the allow the Palestinian farmers to carry out their harvest in an orderly manner.” 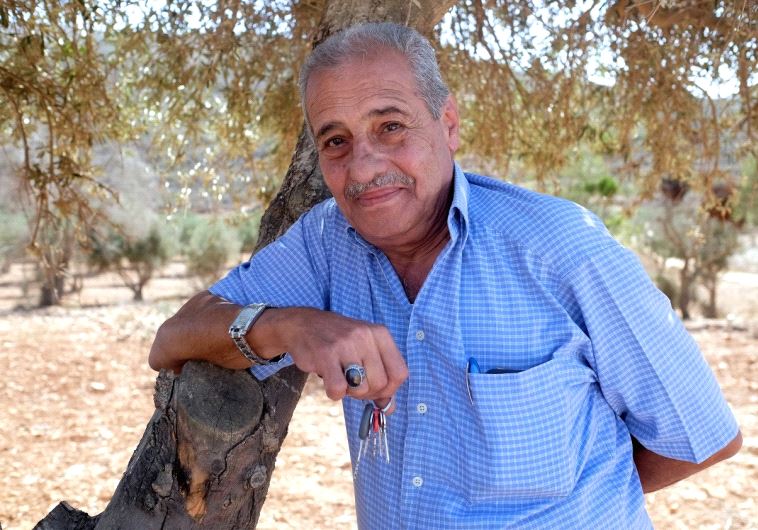 Nabeeh Aldeeb leans against one of his some 850 olive trees near the village of Akraba (Shaina Shealy)
On the southeastern side of the Nablus region, Nabeeh Aldeeb, a Palestinian who owns approximately 850 olive trees between a valley separating the Palestinian village of Aqraba and the settlement of Itamar, is also harvesting olives. Aldeeb, unlike the Ali family, owns trees in an area that the IDF has marked as highly sensitive, which means he had to apply for permission to enter his olive grove.Aldeeb says that he surveyed his land a few weeks prior with the PA security forces and IDF, which granted him five days to complete his harvest. “This year the amount of time is not a problem, but in past years we needed more time,” Aldeeb exclaims, clarifying that his trees bore less fruit this year compared to past years.Aldeeb then points to an IDF vehicle, which slowly makes its way down a nearby hill, explaining the soldiers are responsible for securing the area during his harvest. “Sometimes, I feel that they protect me, but sometimes I feel they protect the settlers,” he says. The vehicle then stops on the side of the road near Aldeeb, and two soldiers yell out in Arabic, “Is everything OK?” “Yes, all is well,” Aldeeb responds. The soldiers then give Aldeeb two cold bottles of water and leave.Aldeeb relays that he has not had problems with local settlers this year during the olive harvest, but recalls a tragic experience many years ago. He warns that something could happen at any minute.“In 2000, there was a black night when the settlers cut all these trees,” says Aldeeb. “In Arabic culture, the man does not cry; it is a very bad thing. But on that day, I sat down on the street and cried because I planted these trees in 1970.”Aldeeb replanted more than 700 trees, and today they all bear olives.Zekariya Sedde, a Rabbis for Human Rights field coordinator, spends the olive harvest season darting around the Nablus region, making sure farmers can safely pick their olives. He says that the amount of attacks against Palestinian olive harvesters is quite low this year.
Zekariya Sedde gazes into the distance near the settlement of Itamar (Shaina Shealy)
“I am honestly shocked how quiet it has been this year,” he says. “The army and police are doing their jobs in providing security for the Palestinian farmers. In past years, the army and police also provided security for the harvest, but did not give the level of attention and interest that they have this year.”Sedde also points out that the army and police have apprehended persons who have confronted and stolen olives from Palestinians, and concludes that the harvest has so far been a “success.”A police spokesman said in a telephone interview that the police “is taking all possible efforts to enforce the law,” but admitted that challenges remain in providing security for farmers who are harvesting in huge open spaces.
Freshly produced olive oil at an olive press in the village of Jit (Shaina Shealy)
As the evening approaches, olive harvesters trek back to their villages. Some retire to their homes while others go directly to the local olive press. In Jit, a village southwest of Nablus, farmers line up at the press to unload their burlap sacks full of olives. The olives undergo a washing and pulverization process, as heavy duty machinery extracts a dark-green olive oil.One farmer fills up a cup with it and takes a taste. “Very fresh and spicy,” he says. “I love it this way.”