The Israeli-Palestinian battle for Africa

Both Israeli and Palestinian leaders alike have been trying to win the hearts of African nations for decades, with varying results. 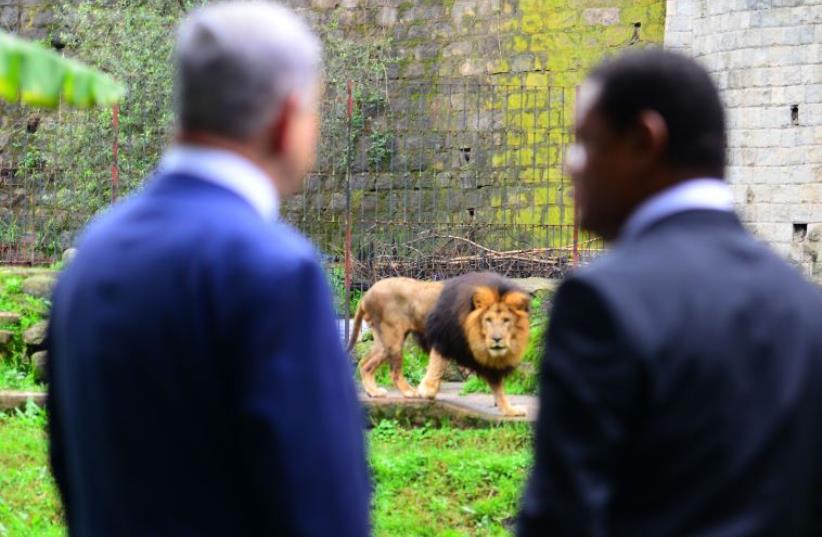 Prime Minister Benjamin Netanyahu views lion during visit to Ethiopia
(photo credit: KOBI GIDON / GPO)
Advertisement
Palestinian Authority President Mahmoud Abbas has called on African nations to continue to support the Palestinian cause and to reject Israel's efforts to improve ties with Africa. Abbas was speaking on Monday before scores of African leaders who were meeting in the Ethiopian capital of Addis Ababa at the 30th Assembly of African Heads of State. While many African nations have historically supported the Palestinians in the international arena, Israel has made it a foreign policy imperative to make diplomatic inroads throughout Africa and to obtain the backing of countries there. To that end, Israeli Prime Minister Benjamin Netanyahu has made three trips to visit African leaders over the past year-and-a-half.More recently, since declaring an end to the primary position the United States has traditionally held in the Israeli-Palestinian peace process, Abbas has called upon the African Union to participate in an international peace forum that would replace the American-led effort. The Palestinian leader declared that “peace efforts require the establishment of a multilateral mechanism under the umbrella of the United Nations." Mazen Shamieh, head of the Africa Department at the PA Ministry of Foreign Affairs, told The Media Line that Palestinians have relations with African nations that go back five decades. "The relations between Palestine and Africa have grown recently with Africa's increasingly important strategic role in the world." Noting that Africa has the largest voting bloc in the UN, he contended that Netanyahu is constantly trying to boost relations with African nations to prevent them from supporting the Palestinian cause. Shamieh claimed that Palestinians "have expertise and capabilities to change realities in developing African nations." Hanna Issa, a Palestinian political analyst, pointed out to The Media Line that Abbas has established solid relations with Africa nations, especially South Africa. These relations were originally nurtured by Palestinian leader Yasser Arafat. "Palestinians need to have the Africans standing by their side, particularly at this time with the Trump administration's pro-Israel position on the Palestinian-Israeli conflict," he said  Ofir Gendelman, a spokesperson at the Israeli Prime Minister's Office, asserted to The Media Line that Israel is a key ally of many African nations who seek its expertise in hi-tech, energy, water, agriculture and security issues. "Israel has expanded considerably its outreach to African nations in recent years as Netanyahu has visited the continent three times in the last 18 months alone." Claiming that Palestinians are trying to foil this African-Israeli rapprochement for cynical political reasons, he said that this would fail as Africa views Israel as a "key partner," while the PA has nothing to offer Africans. Gendelman pointed out that Israel is expanding its diplomatic relations not only in Africa, but also in Asia and Latin America. He explained that after 1967, many African nations cut ties with Israel due to pressure from some Arab countries, "but in recent years we see Israel coming back to Africa and Africa is coming back to Israel." Abbas’ recently launched diplomatic campaign to garner support for a more inclusive peace initiative after having disqualified Washington from its historical role as mediator in the Israeli-Palestinian conflict comes in the wake of US President Donald Trump’s recognition of Jerusalem as Israel’s capital. The PA has effectively boycotted the White House since the December declaration, leading to an unprecedented crisis in relations which has included a drastic cut in American aid to the UN agency that attends to Palestinian refugees. Last week, Abbas traveled to Brussels to lobby European Union member states to help in establishing the multilateral forum, which might also include Russia and China.