The spirit of the intifada, with restraint on both sides 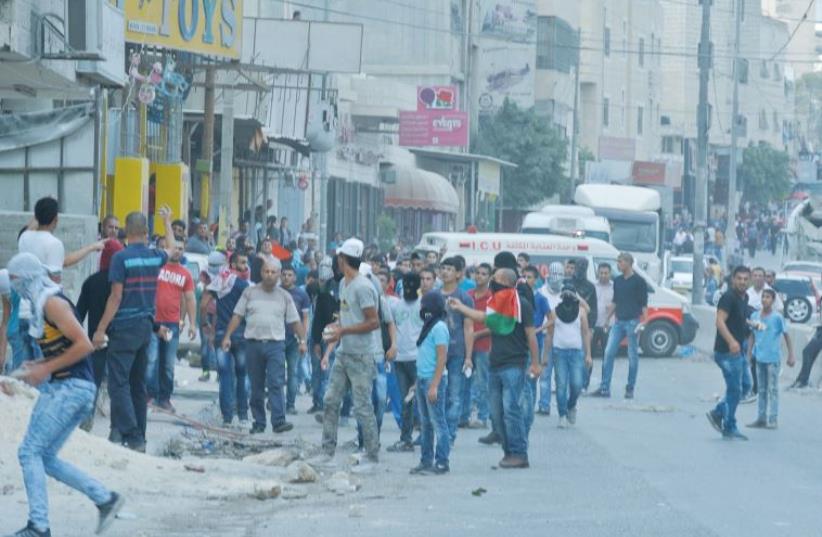 MASKED PALESTINIANS gather to confront Israeli troops yesterday near the Kalandiya checkpoint in the West Bank.
(photo credit: SETH J. FRANTZMAN)
Advertisement
Raw onion is supposed to ease the effects of tear gas, and that’s what young Palestinian boys were passing around as Israeli border policemen were trying to disperse rioters on Tuesday at the Kalandiya checkpoint.The volatile checkpoint between Jerusalem and Ramallah was the focus of clashes that took place throughout the West Bank, as a week of violence has seen four Israelis killed by Palestinian terrorists and two Palestinian perpetrators killed by Israeli policeman and a 13-year old shot in clashes in Bethlehem. Hundreds have also been wounded in dozens of confrontations from Hebron in the south to Nablus in the northern part of the West Bank.
Pro-Palestinian demonstrators clash with police in Jaffa‏
Palestinian Red Crescent ambulances evacuated 12 wounded Palestinians from Kalandiya, one they said was in serious condition, from being hit in the eye with a rubber bullet.Israel Police spokesman Micky Rosenfeld said he had no reports of wounded border policemen.“The riots were dispersed, we will continue our heavy deployment and continually make security assessments today and going forward,” Rosenfeld said.Youths arriving at Kalandiya around noon seemed ready for clashes with Israeli forces from the outset.Ostensibly the reason for the gathering was a peaceful protest involving Mustafa Barghouti, the leader of the Palestinian National Initiative.But some protesters brought tires to the scene and set them alight, while others picked up building blocks from a nearby construction site and broke them apart, using them as rocks to throw at the Israeli troops.“Why is there no gas around to burn the tires?” one young man complained, only to be schooled by an older man that he ought to be placing the burning tires closer to the checkpoint to create a smokescreen for the stone-throwers.When Barghouti and some 100 men and women arrived at the scene, they were quickly met by tear gas and retreated.“People are suffering because Israel is demolishing homes and committing war crimes,” said Barghouti, whose party has advocated nonviolent resistance to Israeli policies. “It’s like India [before 1948] or South Africa, I am sure this is a third intifada and a new moral feeling and new consciousness [has emerged],” Barghouti said.“It is the spirit we had during the first intifada.”Among the protesters, a young man named Fadi could be heard consoling a relative over his mobile phone.“Don’t worry, I’m stuck in a yard in Kalandiya, but I’m okay,” he said.Fadi wasn’t wearing anything around his face to protect against the gas, and sweated profusely. Like a dozen of his friends, he had come to throw stones at Israeli soldiers and then go home.Despite the tensions, both sides seemed to show enough restraint to suggest they prefer to avoid any major confrontation. Israeli soldiers and border policemen advanced to occupy several buildings under construction and fired stun grenades, rubber bullets, and tear gas to disperse the hundreds of protesters throwing stones.One unit of Border Police advancing towards Kalandiya had as many troops holding cameras with which to photograph the perpetrators as forces wielding tear gas launchers. They seemed more interested in detaining the Palestinians later on rather than take the risk of chasing them through the alleyways of the neighboring refugee camp, which abuts the checkpoint.Tuesday’s clashes were part of a larger struggle that some Palestinians have said they feel must be sustained.Khaled Ashhab, who worked for years in the Palestinian People’s Party, a communist organization whose origins date to the 1920s, was at work in his fabric and crafts store on the main road to Ramallah from Kalandiya when the clashes took place.Khaled Ashhab, a longtime activist in the Palestinian People's party
Khaled Ashhab, a longtime activist in the Palestinian People's party“The reason for the small intifada [taking place now] is due to the occupation and the aggression of Israelis, it happens because of what occurs at al-Aqsa Mosque and due to the settlements.”Ashhab said he expects the situation to worsen, accusing Israel of violently quashing Palestinian protests.“They think they can achieve their goals by force, and when that doesn’t work they use harsher methods,” he said.Ashhab says he spent 11 years in an Israeli prison in the 1970s.He would prefer to see a binational state, but accused Israel of torpedoing the chances of achieving coexistence by expanding settlements and controlling the Palestinians.“The policies of Israel are not only hurting Palestinians, but also the long-term interests of Israelis,” Ashhab said.In nearby Ramallah, the atmosphere seemed much calmer, with a relaxed presence of Palestinian security force at the presidential compound.The only trouble the men in their olive-camouflage uniforms seemed to face was when several young Palestinian girls approached to say they had gotten lost after school and asked for directions.Signs nearby advertised Halloween and haunted houses for late October.If there is a third intifada happening, there seemed no evidence of it – yet.
Advertisement
Subscribe for our daily newsletter