According to the IDF Spokesperson’s Unit, the soldiers subsequently approached Hussein, found that he was unarmed, and handed him over to the Palestine Red Crescent Society emergency aid service. 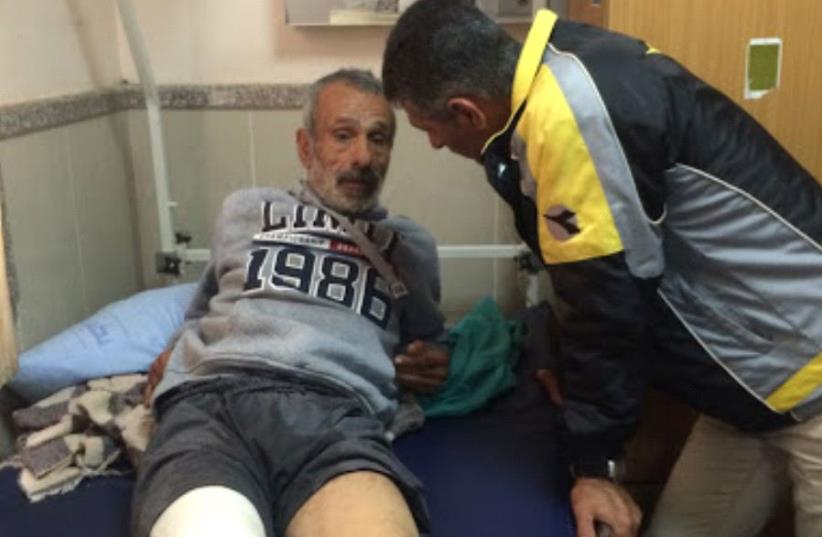 Hussein Kawareek, 54, at Rafidiya Hospital in Nablus
(photo credit: ADAM RASGON)
Advertisement
To the IDF soldiers at a checkpoint, Hussein Kawareek looked like an attacker, but to Kawareek’s friends and family, he is known as a kind-hearted, mentally disabled middle-aged man, who has recently been prone to late night wandering. But on Tuesday morning, Kawareek, a 54-year-old resident of Awarta, a village south of Nablus, ventured into the wrong territory, leading to a major injury. “Hussein is always on the streets—walking around and talking to everyone,” 30-year-old Samir Awad, who also comes from Awarta, said. “Sometimes he can be overwhelming, but he is a well-intentioned person, who would never hurt a fly.” In the past two months, Kawareek has been going on long walks in the middle of the night. According to his sister, Sumaya Kawareek, Hussein started walking to the border areas of Awarta in the black of the night in January, but in the last week, he has been going for walks well beyond the edges of his village. Last week, Hussein went for two such lengthy walks. On Wednesday, he walked to Nablus without informing his family members. “We found out where he was in the morning and went to pick him up,” Sumaya said. On Friday, Hussein went for another walk, but this time, he ended up in Hebron, far to the south. Hussein left his family’s home in the late hours of the evening, walking down route 60, the main north-south thoroughfare in the West Bank. “He somehow arrived in Ayoun al-Haramiya near the Ofra settlement and someone who was going to work took him in his car to Hebron,” Sumaya remarked. “When we received a call in the morning we went to retrieve him.”After Hussein wandered out of the village for the second time, Sumaya said that she realized that she and her family have to take extra measures to ensure his safety. “We tried to keep a closer eye on him, but in the end we are not able to prevent him from going out—he’s a grown man.”  Hussein went for a third long walk in the early hours of Tuesday morning, this time heading for Nablus. After he left the vicinity of his village, he reached route 60 and started to approach a fortified army pillbox, where the IDF forbids pedestrians. Atef al-Adass, a taxi driver from Awarta, saw Hussein. “I hollered over to him to get in my car and that he was going to get himself killed, if he goes any further,” said Adass, who was on his way to Nablus to visit a family member at Rafidiya Hospital. “The soldiers then shined the laser from their guns on us and I pleaded with Hussein, but he refused to get in the car.” As Hussein came within 50 meters of the pillbox, the soldiers stationed there instructed Hussein to stop, but he continued moving forward, Adass added.“Then the soldiers shot two bullets into the air, which startled Hussein and he started running. When he was approximately 200 meters away from the tower, they shot a round of bullets at him, hitting him in the leg and lower half of his hip,” the Adass stated. “I’m positive that Hussein had no idea where he was.”According to the IDF Spokesperson’s Unit, the soldiers subsequently approached Hussein, found that he was unarmed, and handed him over to the Palestine Red Crescent Society emergency aid service.The Spokesperson's Unit told The Jerusalem Post that the soldiers acted within protocol, issuing verbal warnings to Hussein to stop in both Hebrew and Arabic, and when he did not comply, firing warning shots in the air and ultimately a shooting his lower body.The soldiers felt that their lives could be at risk, the IDF added.Dalal Kawareek, another sister of Hussein, said that Tuesday morning’s incident demonstrates reality of military rule. “Mentally disabled people can walk around their neighborhoods in any place in the world, but here under military occupation, it is possible to be shot,” Dalal said, speaking beside Hussein at the  Rafidiya Hospital. “That’s the reality of living under occupation.”The IDF, however, holds that its soldiers cannot take risks, especially in light of the heightened security situation in the West Bank over the past two years, where stabbing, ramming, and shooting attacks take place frequently.Moreover, the army does not have the ability to identify if any suspect, including mentally disabled suspects, poses a threat or is carrying a concealed weapon from a long distance, the IDF said.Hussein, lying on his hospital bed on Wednesday, was in good spirits, smiling and making jokes. When asked to recall Tuesday morning’s incident, Hussein did not say he entered a military checkpoint, but rather said he was going to get tea with his brother Muayyid, who has long been deceased. “We were going to get tea and then they shot at me,” Hussein remembered.Sumaya remarked that she looks forward to Hussein returning to Awarta, but is concerned that he may walk himself into danger again when the cast on his leg is removed. “I really don’t know what to do,” Sumaya said, entertaining the possibility of sending him to a special care facility in Jericho.