It seems safe to say that Radiohead will get a very warm welcome. 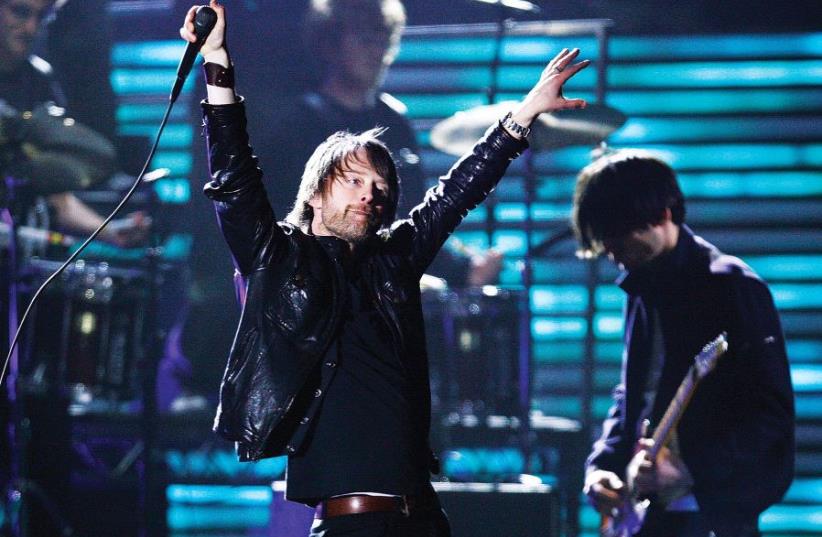 RADIOHEAD
(photo credit: REUTERS)
Advertisement
After dozens of high-profile artists signed a letter in February urging Radiohead to cancel their upcoming concert in Tel Aviv, some might have assumed that the band would not respond to the criticism. After all, the British band’s lead singer, Thom Yorke, rarely gives interviews, and the Israeli-Palestinian conflict is a particularly fraught issue to comment upon.But oh, has Yorke responded.In an interview with Rolling Stone’s Andy Greene published on Friday, Yorke fired back at his critics for assuming that the members of Radiohead are uninformed on the Israeli-Palestinian issue. He argued that the authors of the letter — which rehashes the principle ideas driving the Boycott, Divestment and Sanctions movement against Israel, which aims to to exert economic and political pressure on Israel due to its policies toward Palestinians — waste their energy by throwing the word “apartheid” around.    I’ll be totally honest with you: this has been extremely upsetting. There’s an awful lot of people who don’t agree with the BDS movement, including us. I don’t agree with the cultural ban at all, along with J.K. Rowling, Noam Chomsky and a long list of others.    There are people I admire [who have been critical of the concert] like [English film director] Ken Loach, who I would never dream of telling where to work or what to do or think. The kind of dialogue that they want to engage in is one that’s black or white. I have a problem with that. It’s deeply distressing that they choose to, rather than engage with us personally, throw shit at us in public. It’s deeply disrespectful to assume that we’re either being misinformed or that we’re so retarded we can’t make these decisions ourselves. I thought it was patronizing in the extreme. It’s offensive and I just can’t understand why going to play a rock show or going to lecture at a university [is a problem to them].Yorke also pointed out that Radiohead guitarist Jonny Greenwood is married to an Arab-Israeli woman — and is subsequently uniquely informed about the nuances of the Israeli-Palestinian conflict.    The person who knows most about these things is Jonny [Greenwood]. He has both Palestinian and Israeli fans and a wife who’s an Arab-Israeli. All these people to stand there at a distance throwing stuff at us, waving flags, saying, ‘You don’t know anything about it!’ Imagine how offensive that is for Jonny. And imagine how upsetting that it’s been to have this out there. Just to assume that we know nothing about this.Radiohead’s longtime producer Nigel Godrich also weighed in on the issue, since he also produced the latest album by Roger Waters — the former Pink Floyd frontman who co-wrote the letter to Radiohead.    I don’t believe in cultural boycotts. I don’t think they’re positive, ever. And actually, I think that it’s true to say that the people you’d be denying [the music] are the people who would agree with you and don’t necessarily agree with their government. So it’s not a good idea. Thom and Roger are two peas in a pod, really, in certain respects. They just have a disagreement about this, but they’ve never even met. I think Thom feels very protective of Jonny, which I completely get. But I’m not in the middle of Thom and Roger.Yorke added at the end of his statement that he is not a fan of Israeli Prime Minister Benjamin Netanyahu — and that is an important point. BDS supporters believe that cultural boycotts will hurt Israel’s conservative government but, as Godrich points out, they actually end up affecting the country’s liberal citizens who critique Netanyahu and support peaceful Palestinian statehood. Radiohead can play a concert in Israel for Israeli fans and also be critical of Netanyahu’s policies.Here’s Yorke on Netanyahu (and Trump):    All of this creates divisive energy. You’re not bringing people together. You’re not encouraging dialogue or a sense of understanding. Now if you’re talking about trying to make things progress in any society, if you create division, what do you get? You get fucking Theresa May. You get [Israeli Prime Minister Benjamin] Netanyahu, you get fucking Trump. That’s divisive.Despite that dig at Netanyahu — or maybe precisely because of it — it seems safe to say that Radiohead will get a very warm welcome when they perform at Tel Aviv’s Hayarkon Park next month.