Nearly 100 injured in clashes as Palestinians return to Temple Mount

Earlier on Thursday, the Mufti of Jerusalem, Mohammed Hussein, announced that Muslims could return to pray at the holy place for the first time since two Israeli policeman were murdered there.

Palestinians celebrate following removal of security at Temple Mount
Advertisement
Muslims rioted on the Temple Mount Thursday evening and hurled rocks at police and the Western Wall plaza, after returning to pray there for the first time in almost two weeks.Ninety-six people were wounded in clashes with police, according to the Red Crescent.The Muslims had boycotted the site for the last two weeks in protest of heightened security measures there.Muslim worshipers ascended the Mount with Palestinian flags, in contravention of regulations banning all flags from the site.The thousands of Muslims streamed up to the Temple Mount in the afternoon after the mufti of Jerusalem, Muhammad Hussein, announced they could return to pray at the holy place. 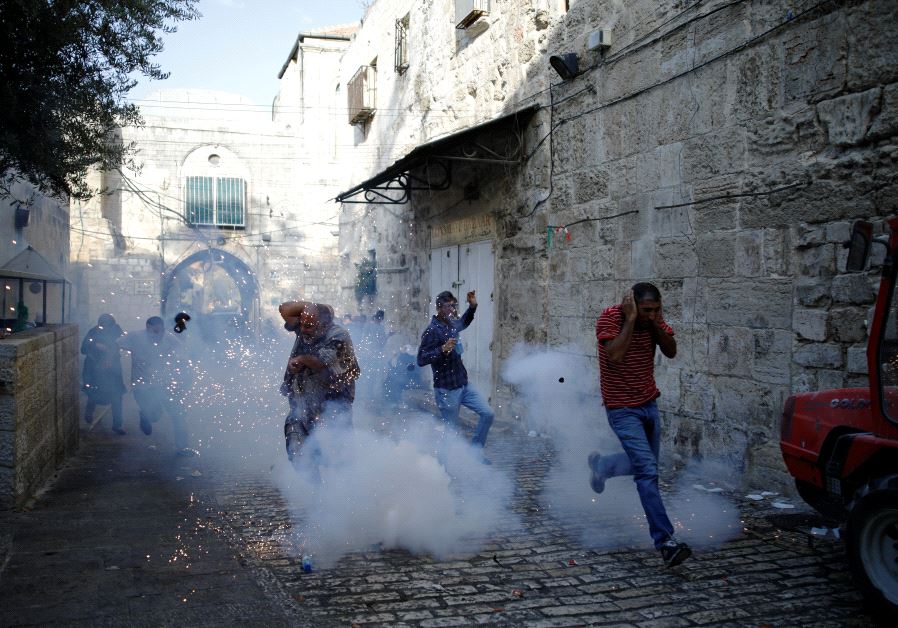 Palestinians react as a stun grenade explodes in a street at Jerusalem's Old city outside the Temple Mount, after Israel removed all security measures it had installed at the compound July 27, 2017. (Reuters)
The decision was made following the removal of all metal detectors, security cameras and other infrastructure installed at the entrances to the compound since two policemen were killed there by three Israeli-Arab terrorists two weeks ago.At least one policeman, who was wounded in the rioting when a rock struck his head, was treated on the scene.“Police personnel deployed in increased numbers on the Temple Mount, at the gates and entrances to ensure security and order, and will respond harshly to any attempt to breach public order and to harm civilians or police,” the police told the press.Jerusalem Police commander Asst.-Ch. Yoram Halevy said he expected large numbers of Muslims to attend Friday prayers at al-Aksa Mosque on the Temple Mount, and that he was also expecting attempts to harm police personnel and civilians.“Do not test us tomorrow, and no one should be surprised if there are injuries on the other side,” he said in a stark message to the Palestinians. “I call on the leadership of the other side to act to calm the atmosphere, and again not to test us tomorrow.”Prime Minister Benjamin Netanyahu said following the riots on the Temple Mount that after discussing the issue with Defense Minister Avigdor Liberman and Public Security Minister Gilad Erdan, he ordered heightened numbers of Border Police to bolster the police personnel deployed in Jerusalem.Following uproar in the Muslim world and fury from Palestinian religious and political leaders, police on Thursday morning removed the recently erected metal detectors and CCTV cameras. The items were originally placed at the entrances to the Temple Mount to prevent more terrorist attacks against Jews and security personnel at the site.Terrorists have consistently used al-Aksa Mosque as a staging ground for attacks and riots due to the exploitation of an agreement with the Jordanian government barring Israeli officers from entering the mosque.In a brief statement, police spokesman Micky Rosenfeld confirmed the developments.“The metal detectors and cameras that were put into place outside the Temple Mount after the terror attack on the Temple Mount, when two officers were murdered, have been removed and dismantled,” he said, adding that he could not add more details at the time.The official Palestinian news agency Wafa reported that Palestinian Authority President Mahmoud Abbas “praised the steadfastness of Jerusalem Muslims and Christians in the face of the Israeli measures against al-Aksa and said their stand was such that the right would prevail and the wrong would pass away.”PLO executive committee member Wasel Abu Yusuf told The Jerusalem Post that the lifting of the Israeli measures is “a great achievement for the defenders of al-Aksa and for the Palestinian people against all the efforts to solidify the occupation against blessed al-Aksa Mosque.“All the sons of the Palestinian people are called to come to blessed al-Aksa mosque for prayers,” he said.The United States said it would not pressure Israel to make security decisions one way or another “for political purposes,” a State Department official said on Thursday. Thus the administration did not ask Israel to remove either metal detectors or cameras from the holy plateau.“We continue to monitor that situation very closely,” said State Department spokeswoman Heather Nauert. “We don’t want to do or say anything that will escalate tensions in the region. We all know it’s a fragile part of the world.”Nauert said the Trump administration is taking a “long view” of the Israeli-Palestinian conflict, and would remain cautious in its public statements regarding current tensions on the Temple Mount. The president’s special representative for international negotiations, Jason Greenblatt, remains in the region for meetings with leadership from both sides, she said.Michael Wilner in Washington and Jerusalem Post staff contributed to this report.