Thousands run for freedom of movement in Bethlehem marathon

The IDF maintains that it limits the movement of Palestinians in the West Bank for security purposes, such as preventing attacks against Israelis. 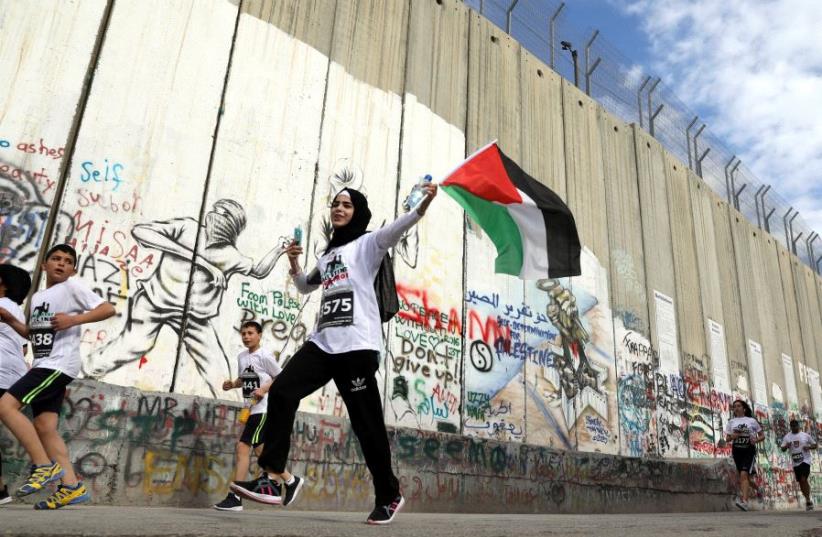 Participants in the Bethlehem marathon
(photo credit: REUTERS)
Advertisement
Some 5,500 runners from 60 countries descended on Bethlehem on Friday to participate in the fifth annual Right to Movement Palestine Marathon.The marathon, which starts footsteps away from the Nativity Church, highlights the limits on movement for Palestinians living in the West Bank, as runners are obliged to pass through two loops around Bethlehem. There are no continuous 42.195-kilometer routes in the city because of checkpoints and other barriers.Martin Steenkamp, a South African runner, won the race for the second year in a row, finishing it in two hours and 51 minutes.“I saw the suffering of the Palestinian people throughout the race,” Steenkamp told Wafa, the official PA news site, upon finishing the race.Steenkamp and other runners passed through two refugee camps and ran along the security barrier.The IDF limits the movement of Palestinians in the West Bank for security purposes, such as preventing attacks against Israelis.Jabril Rajoub, the Palestine Olympic Committee chairman, said that the marathon sent a clear message that “we [the Palestinians] are here and the world is standing with us.”The marathon is the only one that takes place in the Palestinian territories, as the United Nations canceled the Gaza Marathon in 2013 after Hamas banned women from participating.