Tibi to ‘Post’: There is great anger and rage, could be right before an explosion

“It is a killing by the occupation,” argued Tibi. 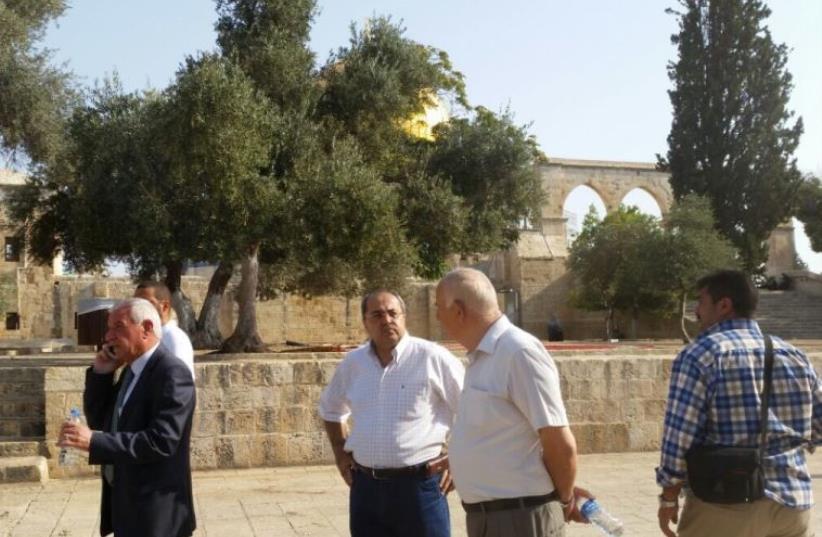 Ta'al chairman MK Ahmed Tibi visits the Aksa mosque at the Temple Mount
(photo credit: Courtesy)
Advertisement
Palestinians feel their lives are worthless and that tensions may be on the verge of exploding, Ta’al chairman Ahmad Tibi told The Jerusalem Post on Sunday.Tibi, who was at the Aksa mosque on the Temple Mount on Sunday morning, said all of the gates were closed, but that some Jewish groups were allowed to enter, which served as an “unnecessary provocation.”“This is adding fuel to the fire,” he said, saying al-Aksa is “a most sensitive place.”“There is great anger and rage,” he said. “This could be the moment right before an explosion.”Friday’s torching of a Palestinian home in Duma, near Nablus, by suspected Jewish settlers that killed a toddler and seriously hurt his parents and brother, caused an outcry and prompted vows by Prime Minister Benjamin Netanyahu to crack down on “terrorism” by “criminals in our nation.”Defense Minister Moshe Ya’alon will subject any Israelis arrested for the Duma arson or similar incidents in the future to “administrative detention,” his spokesman said.The fact that the attack occurred in the middle of the village meant that it was “well planned,” Tibi said, expressing concern that this would not be the last attack.“We will probably see more of these criminals breaking the law,” he said.He dismissed the condemnation of the attack by the prime minister and other senior Israeli officials as just talk.“I do not see how they describe this as ugly because the killing of Palestinians by the army is a normal occurrence. What is the difference if a Palestinian is killed by the army or by a settler who burns a house? It is a killing by the occupation,” Tibi argued.“Do you think Bibi will destroy the houses of the families of the people who did this? Will they go and take DNA samples from all the males from their settlement like they do for Arabs?” he asked.The incidents in the West Bank and the situation around al-Aksa could incite the region, he warned.“Bibi’s [Netanyahu] policy is the problem, the man a few days ago allowed more building in the settlements,” he said, calling Netanyahu’s government “the most extreme of the last 20 years” with settler extremists having representatives in the government, Knesset and coalition.”UAL’s Abdel-Hakim Haj Yahya, told the Post these perpetrators should not only be called terrorists, but need to be declared “a terrorist organization” and “their rabbis investigated.”MK Yousef Jabareen (Hadash) said “the policy of occupation and settlement expansion, which are solid foundations of the Netanyahu government, is responsible for hate crimes and the ongoing assault on Palestinian property and life.”Without ending the occupation, Jabareen said, “these heinous crimes would continue.”Reuters contributed to this report.