Top 5 most egregious anti-Israel headlines in the international media

Major news outlets all over the world have been accused of using unfair headlines when it comes to Israel. 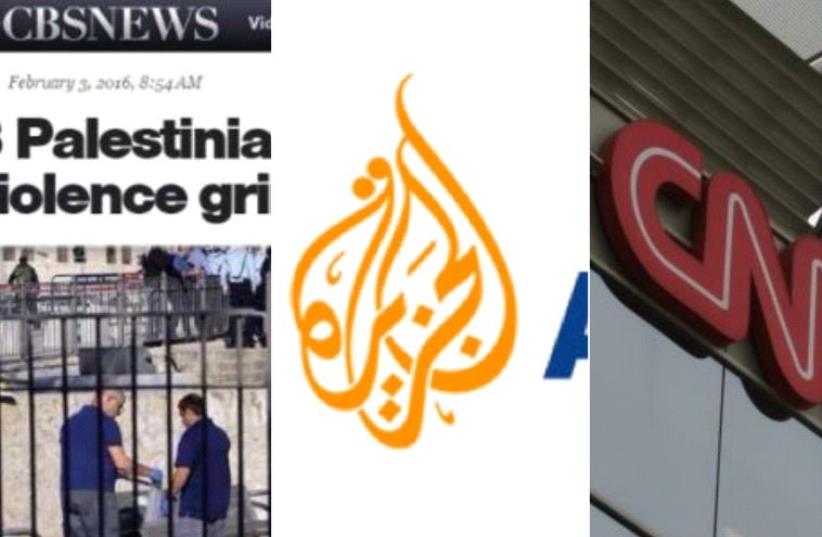 News outlets convey biased headlines against Israel
(photo credit: REUTERS,Wikimedia Commons)
Advertisement
Israel supporters have said for years that there is an international media bias against the Jewish state.This bias, they say, is reflected in erroneous headlines that downplay Israeli victims and always make Israel appear to be the aggressor.Over the years, several headlines from major international news organizations have sparked an uproar, and have many times been changed or taken down after numerous complaints.Here our some of the most well-publicized instances of the anti-Israel bias playing out in media headlines:1) Following a terror attack in Tel Aviv's Sarona market on July 8 that left four people dead and 16 wounded, CNN inspired outrage with its headline when it put the word "terrorists" in quotations on its Facebook page.Additionally, the news outlet failed to mention terrorism even once in the article reporting the ordeal.Similarly, the British news network SKY also neglected to use the word "terror" or "terrorism" in their report of the attack at Sarona.The BBC's headline, "Tel Aviv shooting: Three killed in attack in shopping center" was also markedly void of the keywords.The Telegraph as well as the Guardian also labeled the terror attack as a "shooting" incident in their headlines.CNN swiftly removed the tweet and issued an apology via Twitter, calling their use of quotation marks around the word terrorist in their news headline "a mistake.""The attacks were, without question, terrorist attacks," the news agency said in a press release. 2) After a terrorist attack in Jerusalem in which two Palestinian attackers tried to stab police and were shot, CBS described the incident on it's website with the following headline in a story about the attack: “3 Palestinians killed as daily violence grinds on.” Foreign Ministry spokesman Emmanuel Nachshon said the original headline was “biased and dishonest,” and an example of “unparalleled chutzpah," and the network later changed the headline to “Israeli police kill 3 alleged Palestinian attackers.”3) After a Terrorist attack at a Jerusalem synagogue in November of 2014, CNN ran the story with the headline “4 Israelis, 2 Palestinians dead in Jerusalem," failing to note that the two Palestinians were the terrorists. However, in a separate reporting gaffe, CNN superimposed their preliminary coverage of the terror attack with the headline: "Deadly attack on Jerusalem mosque."4) After a stabbing attack in April 2015, Al Jazeera English tweeted "Palestinian shot dead after fatal stabbing in Jerusalem; 2 Israeli victims also killed."  The network later apologized saying it regretted "the wording of a tweet posted regarding an attack in Jerusalem" after receiving a  wave of criticism from their audience.5) Reporting on the ongoing violence on the Temple-Mount, the AFP and the Daily Mail both wrote on Monday a story with the headline "Jordan slams Israel after radical Jews visit Islamic holy site," failing to mention the site's significance to the Jewish religion and the historical fact that two Jewish Temples sat atop the temple for over a thousand years.