Jibril Rajoub wants one embassy in East Jerusalem and another in West Jerusalem. 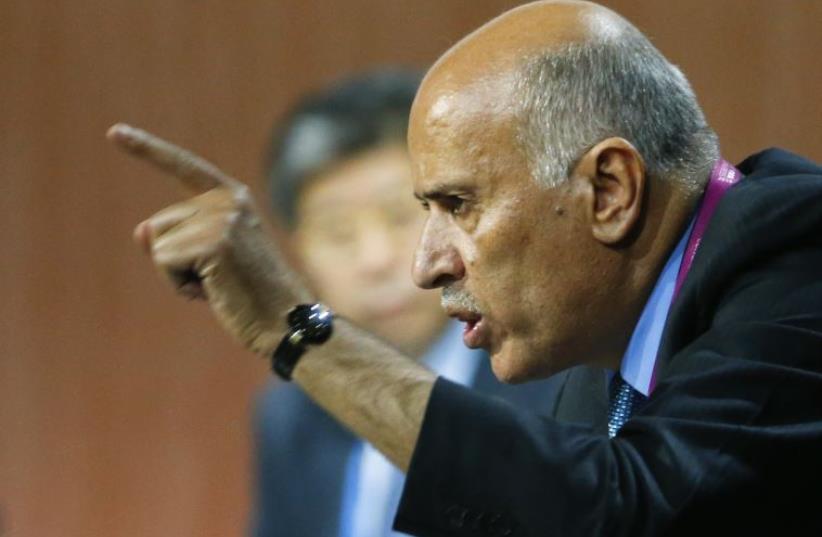 Senior Fatah official Jibril Rajoub
(photo credit: REUTERS)
Advertisement
Top Fatah official Jibril Rajoub on Thursday welcomed US President Donald Trump’s decision to hold off from moving the US embassy from Tel Aviv to Jerusalem.“This is a responsible and rational decision,” Rajoub told The Jerusalem Post in a phone interview. “The American president clearly understands that the issue of Jerusalem is complex and should be resolved in the framework of a final agreement.”A senior White House official said Trump decided “not to immediately move the US embassy in Israel to Jerusalem,” Bloomberg News reported on Wednesday.
Jibril Rajoub discusses Trump and Abbas conversation on March 15, 2017 (credit: SETH J. FRANTZMAN)
Trump will have to sign a presidential waiver by June 1st to prevent the relocation of the US embassy. US law requires that the embassy be moved to the capital unless the president signs a waiver to block its relocation.Rajoub added that following a final agreement two American embassies should be established in Jerusalem: “One in east Jerusalem in Palestinian territory and another in west Jerusalem in Israeli territory.”Trump promised in his election campaign to relocate the US embassy to Jerusalem.Wasel Abu Yousif, a PLO Executive Committee member, said that Trump changed his position on the embassy issue because of warnings from Arab countries.“Jordan, Egypt, Saudi Arabia, and others told Trump about the dangers of such a move.” Abu Yousif said. “After hearing a unified message from the Arab world, Trump is dealing with this issue seriously.”Trump will be visiting Saudi Arabia this weekend before he comes to Israel and the Palestinian Territories on Monday and Tuesday.Trump has said he wants to help Israel and the Palestinians reach “an ultimate deal,” but has revealed little about his vision for achieving such a deal.