Confidante of PA chief says meeting was respectful calls reports to the contrary "total fabrication and a lie." 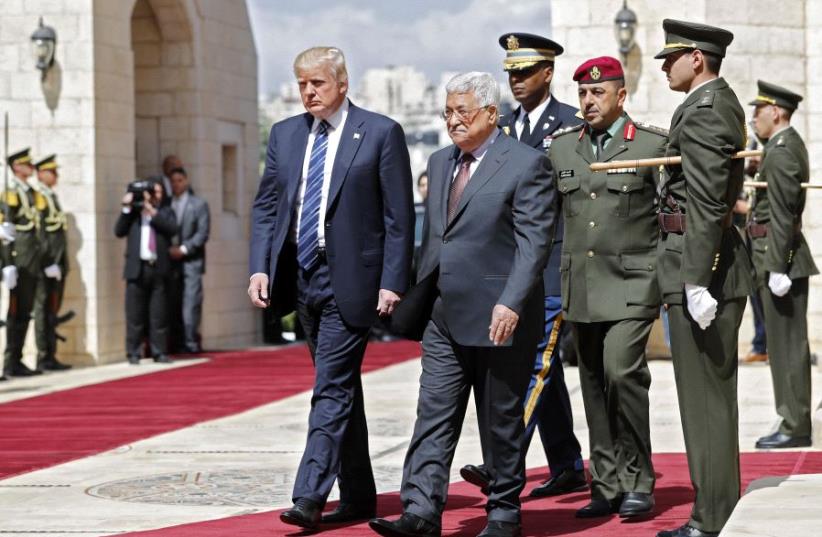 US President Donald Trump (L) and Palestinian leader Mahmud Abbas (2nd L) review the honour guard at the presidential palace in the West Bank city of Bethlehem on May 23, 2017
(photo credit: THOMAS COEX / AFP)
Advertisement
A senior Palestinian official on Monday denied a report about a confrontation between US President Donald Trump and Palestinian Authority President Mahmoud Abbas during the American leader’s visit to Bethlehem last week.“It is a total fabrication and a lie,” Ahmad Majdalani, a confidante of Abbas, told The Jerusalem Post. Channel 2 reported on Sunday evening, citing an American source, that Trump shouted at Abbas in Bethlehem, saying that he was fooling him.
Trump-Abbas meeting in Washington. (Reuters)
“You deceived me in Washington,” Trump reportedly told Abbas, alluding to a meeting they had in the American capitol earlier in May. “You spoke to me about peace, but the Israelis showed me that you personally have a hand in incitement.”Majdalani added that all the meetings between Abbas and Trump have been “positive.”“The talks we have had with the American administration have been based on mutual respect,” Majdalani said. “They have been positive and we are feeling a major development in the American administration’s position.”Nabil Shaath, Abbas’s foreign policy adviser, told the Post that while is aware that the issue of incitement was raised in the Bethlehem meeting, he has no knowledge of Trump shouting at the PA president.“There was a question that Mr. Trump had about something that Mr. Netanyahu told him,” Shaath said. “Our president explained the matter very clearly to Mr. Trump and the meeting went on quite productively.”Shaath said his account of the meeting is based on a conversation he had with Abbas.Israel has long accused the Palestinian leadership and Abbas of incitement by praising violent attackers. Prime Minister Benjamin Netanyahu told his cabinet meeting on May 4 that the Palestinians “name their schools after mass murderers of Israelis.”A number of facilities and institutions have been named after Palestinians who carried out violent attacks against Israel. Most recently, a women’s center in the village of Burqa near Nablus was named after Dalal al-Mughrabi, who killed 38 Israeli civilians including 13 children.Abbas has said that incitement exists in Israel and the Palestinian territories and called for the revival of a tripartite Israeli-Palestinian-American anti-incitement committee to deal with the issue on both sides. “Incitement can lead to violence, and we must end it in every place,” Abbas told a group of Israelis visiting the PA presidential headquarters in Ramallah on November 22. “We must revive the tripartite committee to deal with this issue.”The anti-incitement committee was created following the signing of the Wye River Memorandum in 1998, but has not met since the outbreak of the second intifada more than a decade ago.