By ANNA AHRONHEIM
JULY 22, 2017 12:21
Defense Minister Avigdor Liberman and IDF Chief of Staff Gadi Eisenkot visit Halamish (Ministry of Defense)
Advertisement
IDF Chief of Staff Lt.-Gen Gadi Eisenkot and Defense Minister Avigdor Liberman were in the West Bank settlement of Halamish Saturday morning, hours after a deadly terror attack killed three family members.Eisenkot and Liberman visited the home where the deadly attack took place and called on Palestinian Authority Chairman Mahmoud Abbas to condemn the attack.“We demand an unequivocal condemnation of the massacre that took place last night in which an innocent family, who did not endanger anyone, was massacred during their Shabbat meal,” Liberman said. 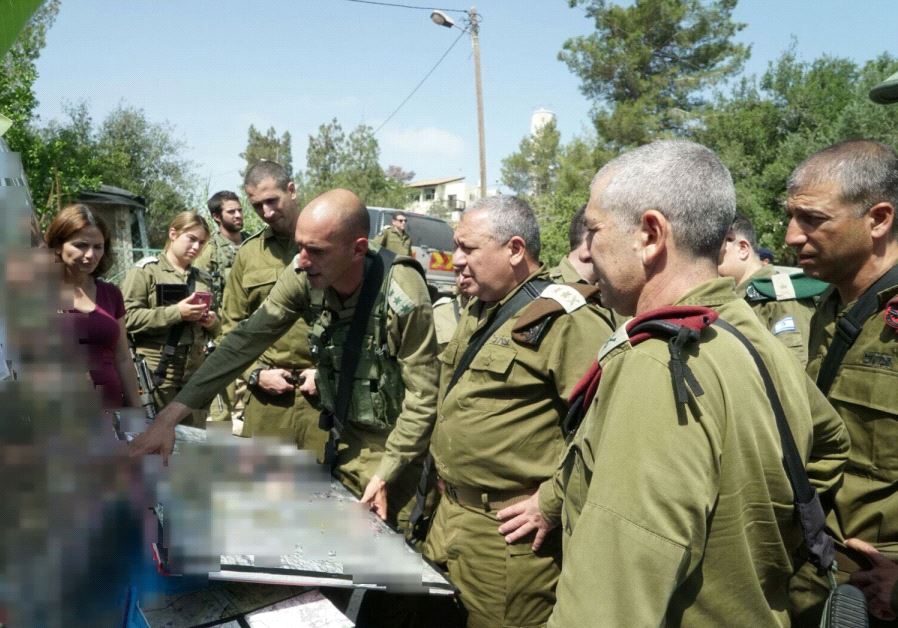 IDF Chief of Staff Lt.-Gen. Gadi Eisenkot is briefed by senior IDF officers at the scene of the attack in Halamish, July 22, 2017. (IDF Spokesperson's Unit)Eisenkot and Liberman, who were accompanied by the head of Coordinator of Government Activities in the Territories Maj.-Gen Poly Mordechai as well as the head of Military Intelligence Maj.-Gen Hezi Halevi, were given a situational briefing by the commander of the IDF’s Central Command Maj.-Gen. Roni Numa as well as the brigade commander and by the Shin Bet internal security forces. Liberman instructed security forces to speed up the procedures to demolish the homes of the terrorists who carried out the deadly attack in Jerusalem’s Old City which killed two police officers as well as the home of the Halamish attack. He also asked that the presence of IDF troops on roads and in sensitive locations in the West Bank be increased.Earlier on Saturday, Eisenkot also met with the commander of the Judea and Samaria Regional Command, Brig.-Gen. Lior Carmeli.Israeli troops on Saturday morning raided the home of the Palestinian terrorist who killed three members of an Israeli family in the West Bank settlement of Halamisch, carrying out extensive weapons searches.Forces carried out an extensive operation in Kobar, the hometown of the attacker, arresting his brother and mapping his home in preparation for demolition. In addition troops, special units and the Shin Bet encircled the village and residents will only be allowed to leave for humanitarian reasons.Following the attack on Friday evening IDF Chief of Staff Lt.-Gen. Gadi Eisenkot held an emergency meeting of top army brass to discuss the situation. It was decided that the IDF would send additional troops to the West Bank to reinforce forces already there and in addition to 5 extra battalions placed on alert on Thursday.  The added security measures came due to tensions surrounding the installation of metal detectors on the Temple Mount complex following the deadly terrorist stabbing attack that took the lives of two Israeli police officers last week.The attacker, who was identified by Palestinian media as 19 year old Omar al Abed from the West Bank village of Khobar, near Ramallah. A few hours before the attack Abed posted on Facebook that he felt obligated to act in light of recent events and that “these are my last words.”“I am a young man who is not yet 20 with many dreams and aspirations...I adored life but what kind of life is this? They kill our women and youth, desecrate Al-Aqsa while we sleep,” he wrote in Arabic, continuing that “they declared war on Allah and all I have is a knife and it will answre the call of al-Aqsa... We are all the sons of Palestine and the sons of al-Aqsa. You will be held accountable you monkeys and pigs if you do not open al-Aqsa.”“I know I am going and will not return,” he wrote bidding farewell to his familyAccording to Channel 10 news, the initial investigation into the attack found that Abed carried out the attack alone, walking three kilometers from his village to the settlement armed with a knife that he had bought a few days earlier and chose a house near the fence which had a door open in order to carry out the attack. Abed lunged at the family and began stabbing them, killing a father in his 60s and his two children, a man and woman in the 40s.Abed was shot by the victims' neighbor, an off-duty Oketz unit soldier who heard screams from the next door house and shot through the window of the house, seriously injuring him. Abed was later evacuated to hospital. A senior IDF officer stated that Abed was affiliated with Hamas but was not a member and had bought a knife in the last two days “with the intent to cause harm in response to the events surrounding the Temple Mount.” The Gaza-based terror group praised the attack as “heroic” and said it was because of “Israel’s attacks on the rights of our people in Jerusalem and at Al-Aqsa Mosque.”