Twitter users used the #AskHamas campaign to mock the Islamic terror group, commenting on the murder of civilians in terror attacks and the presence of Palestinian children at suicide bomber rallies.

Palestinian Hamas supporters take part in a rally marking the 30th anniversary of Hamas' founding, in the West Bank city of Nablus December 15,
(photo credit: ABED OMAR QUSINI/REUTERS)
Advertisement
In 2015, the Gaza-based Palestinian terror group Hamas announced that it would invite users on social media, particularly those in the West, to ask questions in the run-up to a key European Union court hearing that will determine whether it would recognize Hamas as a terrorist organization.The campaign was launched under the hashtag #AskHamas. Within hours, it became a trending Twitter topic in the United States, with social media users flooding their feeds with sarcastic questions that were definitely not what Hamas had in mind.Twitter users used the #AskHamas campaign to mock the Islamic terror group, commenting on the murder of innocent civilians in terror attacks, the presence of Palestinian children at rallies together with gunmen wearing suicide bomber vests, and the luxurious living conditions of Hamas leadership compared to the poverty of the Gaza population.

#AskHamas, What in life brings you the most joy? Bombing playgrounds full of children or paying your friends to become suicide bombers? pic.twitter.com/x3eDRnv11k

In the past day or two, #AskHamas has been trending again in the Twittersphere. Twitter users, who have been hearing quite a lot about Hamas in the news lately can't seem to refrain from asking more sarcastic questions, which are unfortunately still quite relevant in 2018.

#AskHamas, when's the next election in #Gaza, will you be throwing your political opponents off rooftops like last time? pic.twitter.com/uWcYflHV6E

When Hamas originally began its campaign, it promised responses from their leaders; it called it, “Truth from the mouth of the horse.”  But apparently the "mouth of the horse" is selective about which questions it answers.

#AskHamas, Do you intentionally send rockets to hit your own electrical power plants (cutting off electricity to #Gaza) or was that intended for terrorizing the people of #Israel pic.twitter.com/k4BFPXmOv3


An IDF spokesperson chimed in with several probing questions for Hamas. Ironically, no one in Israel will be able to read the answer since Israel has completely blocked the Hamas Twitter account.

.@HamasInfoEn Why do you shoot rockets at Israeli schools and playgrounds? Why do you fire from the homes of your own people? Why do you teach your children to hate and murder Jews? Why do you invest in terror and not in the people of Gaza? #AskHamas


Below is a screenshot from the official Hamas English language account, Hamas Movement #HamasInfoEn with the questions they choose to answer and their responses. 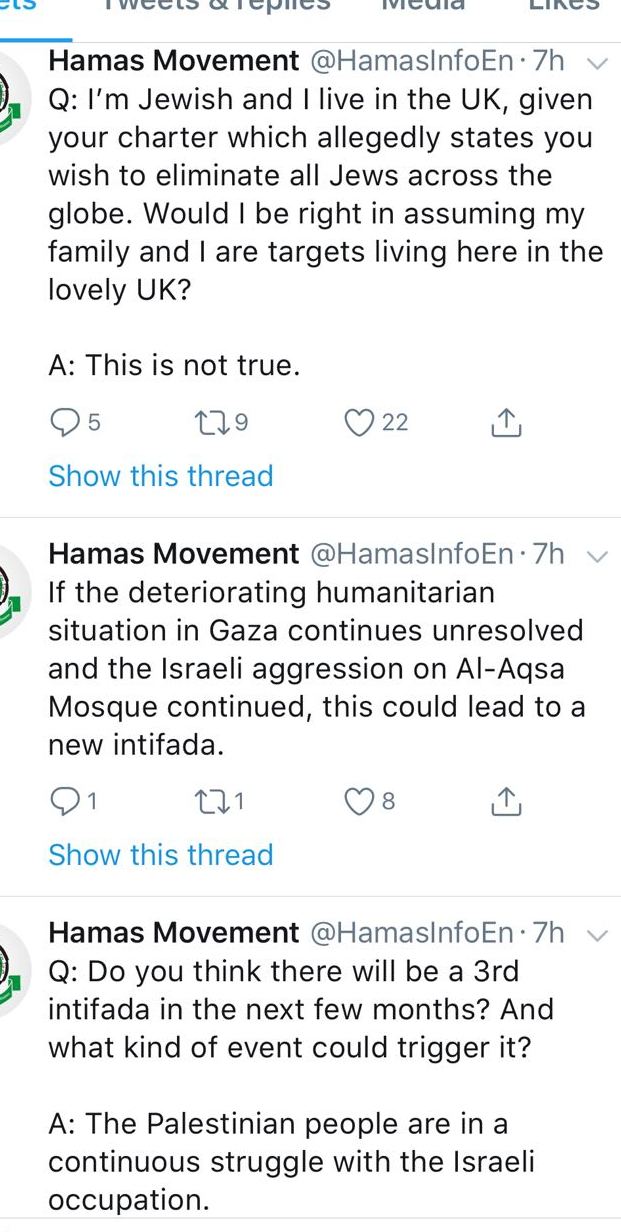