"Hannah was the most caring, sensitive and compassionate daughter you could ever wish for,” said family. 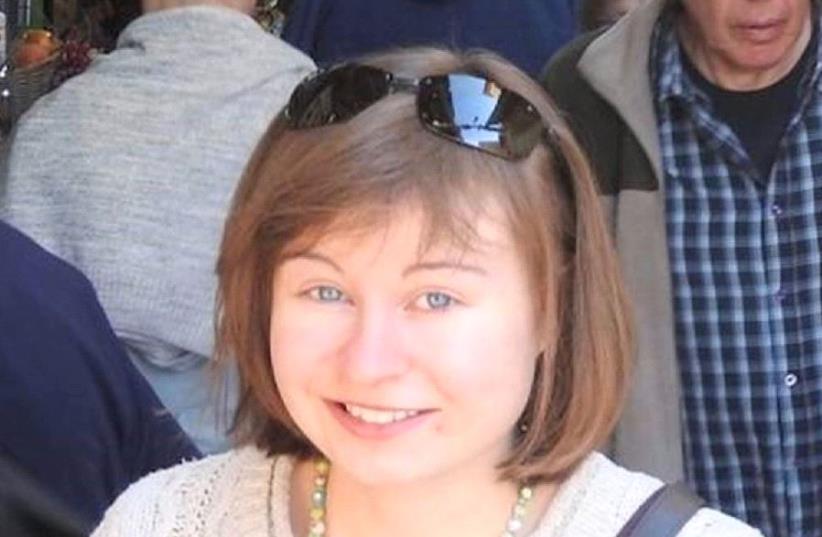 Stabbing victim Hannah Bladon, 20, an exchange student at The Hebrew University of Jerusalem.
(photo credit: FACEBOOK)
Advertisement
Three days after she was stabbed to death by an Arab terrorist on the Jerusalem Light Rail, international tributes have poured in celebrating the life of Hannah Bladon, a 20-year-old British exchange student who was studying at the Hebrew University.
Scene of stabbing attack on Jerusalem light rail in which British student Hannah Bladon was killed , on April 14, 2017 (credit: REUTERS)
Bladon was repeatedly stabbed by Jamil Tamimi, 57, of east Jerusalem’s Ras al-Amud neighborhood, while the train was traveling past the Old City, where tens of thousands of visitors from across the globe were observing Passover and Easter.Tamimi, described by police as mentally unstable, was arrested by an officer at the scene. Bladon sustained critical wounds to her upper body and died shortly thereafter at Hadassah-University Medical Center on Jerusalem’s Mount Scopus.Bladon, who was majoring in religion, theology and archaeology at Birmingham University, was an exchange student at the Hebrew University’s Rothberg International School. Hours before she was killed, she took part in an archeological dig under the Old City.By Monday, an outpouring of condolences and tributes from Britain and Israel honored the young woman, who was described as caring, sensitive and compassionate.Dr. Andrew Davies, head of theology and religion at Birmingham University, called Bladon “a rare treasure.”“I think one of the first things that struck us about her was her enthusiasm,” Davies told the Burton Mail. “She was always first to be there for lecture, bright eyed, bushy tailed, even in the early hours of the morning.Really enthusiastic, really dedicated and really committed – clear first-class material, and she wanted to be an academic in the future.”Bladon’s high school academic achievements resulted in a full scholarship to the university, which she described as a “privilege and amazing opportunity for my future, allowing me to concentrate fully on my studies without financial and emotional pressure.”“I hope to inspire other students that, no matter what their circumstances, higher education is achievable by all,” Bladon told her high school newspaper in 2015.Her pastor, Bishop of Lichfield Reverend Dr. Michael Ipgrave, lamented her untimely death.“On behalf of the Diocese of Lichfield, I would like to express my deep sadness at Hannah’s death and offer my sympathy and prayers for her family at this terrible time,” he said. “Hannah played an active part in the life of her local church in Burton, where she was a server. My thoughts are with her church family in Burton.”The Israel Antiquities Authority also issued a statement over the weekend praising Bladon’s contributions to excavation work in the Western Wall tunnel.“The Israel Antiquities Authority joins the mourning of the Bladon family for the murder of their daughter, Hannah,” the authority said. “Hannah volunteered in the last few days in the archeological excavation run by the authority in the Western Wall tunnel, where she was due to return after the holiday. May she rest in peace.”English soccer club Derby County held a minute of silence before the start of its game against Huddersfield Town on Monday in her memory. Before the game started, the stadium announcer called for a minute’s silence in memory of Bladon, who was tragically murdered on Friday in Jerusalem.Also on Friday, the Hebrew University extended its condolences to Bladon’s family and condemned her murder.“The university’s administration and staff members are providing all the necessary support to all the students, staff members and families in Israel and abroad,” it said in a statement. “May her memory be for a blessing.”Bladon’s family issued a statement via Britain’s Foreign Office, saying they are devastated by her death.“Hannah was the most caring, sensitive and compassionate daughter you could ever wish for,” her parents said. “Our family is devastated by this senseless and tragic attack.”The details of Bladon’s burial arrangements remained unclear as of Monday.