Erdoğan's comments came after he called Tuesday on Muslims worldwide to “defend al-Aksa." 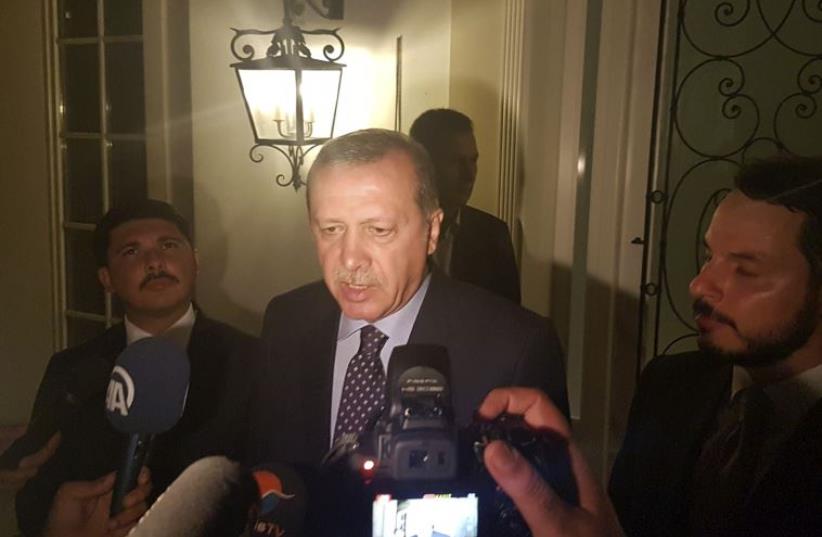 Turkish President Tayyip Erdogan speaks to media in the resort town of Marmaris, Turkey
(photo credit: REUTERS)
Advertisement
Turkey's President Recep Tayyip Erdogan said on Wednesday that the removal of metal detectors from the entrances to the al-Aksa mosque compound in Jerusalem’s Old City was a right move but not enough. “Israel’s step back from the metal detector implementation that offends Muslims is right but not enough,” Erdogan said. He also urged abstaining from policies that would throw the region into the “circle of fire.”Erdogan's comments came after he called Tuesday on Muslims worldwide to “defend al-Aksa."Foreign Ministry spokesman Emmanuel Nahshon responded on Tuesday by saying that the Turkish president’s words were “delusional” and “distorted.”“He would do better to deal with the problems and difficulties in his country,” Nahshon said.“The days of the Ottoman Empire are over,” Nahshon continued.“The capital of the Jewish people was, is and always will be Jerusalem. As opposed to the past, this is a city where the government is committed to its security, liberty, freedom of worship, and respect of the rights of all minorities.”Those who live in glasshouses, Nahshon said, “should not throw stones.”The Prime Minister’s Office said that Erdogan is “the last person” who can preach to Israel. “It is interesting what Erdogan will say to the Kurds and residents of northern Cyprus,” a PMO statement read. Herb Keinon contributed to this report.