Paramedics said the four-year-old is in moderate condition, while the remaining two suffered light wound in the firebombing of their vehicle. 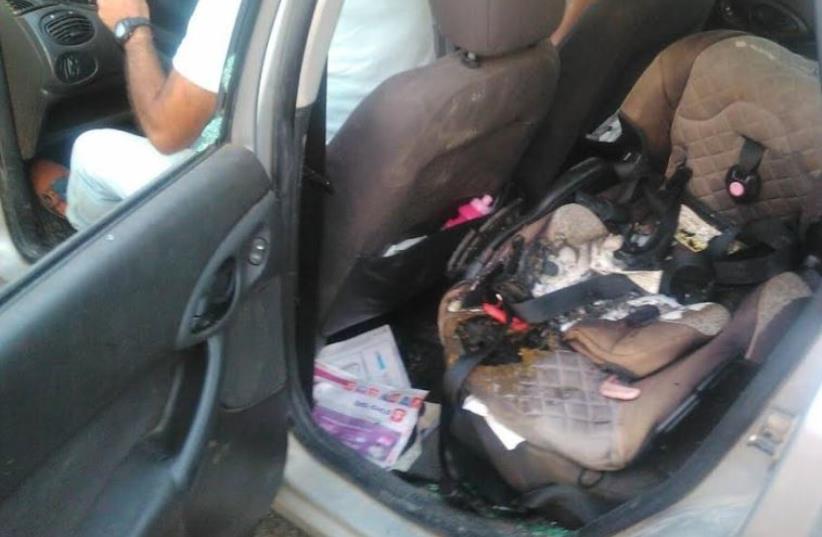 The Israeli-owned vehicle that was attacked with a Molotov cocktail near the settlement of Beit El
(photo credit: TAZPIT)
Advertisement
Palestinian terrorists threw a firebomb at a vehicle traveling on Route 60 on Friday evening, wounding five members of an Israeli family – girls aged four and 11, their brother and their parents.The four year old suffered moderate burns, while her mother, 44, father, and two siblings were lightly wounded.They were all taken to Hadassah-University Medical Center in Jerusalem’s Ein Kerem.The car was attacked while traveling north from the Givat Assaf outpost toward Beit El, north of Ramallah.The IDF was searching for the attackers.On Saturday morning, a Palestinian posing as a Krembo candy vendor tried to stab a security guard at the Gilboa (Jalama) crossing to the West Bank, north of Jenin, and was shot dead, the Defense Ministry said. No one else was injured, police said.A bomb squad unit was called to the scene to check for explosives on the terrorist’s person and in the area.The terrorist, Muhammad Zakarna, 16, from the nearby village of Kabatiya, had approached the checkpoint with a carton of Krembos, the Defense Ministry said.“He suddenly threw down the carton, pulled out a knife, and started running at the security personnel staffing the checking zone of the crossing,” the ministry said.A guard spotted the terrorist running between cars waiting to cross the checkpoint and shot him from short range.Kamil Abu Rukon, head of the Crossings Authority, praised the swift actions of the civilian guard, saying he saved lives. “We practiced this and similar scenarios many times recently due to the increase in security threats,” Rukon said. “Security personnel functioned exactly as we expected them to,” he added.The Gilboa crossing sees heavy traffic on weekends, when thousands of Israelis head to Jenin to shop. Abu Rukon said the attack most of all “first hurt Palestinians and the Palestinian economy.”Earlier on Saturday, a Jewish man said that an Arab attempted to stab him near the Garden Tomb in Jerusalem, north of the Old City, police said.While walking on Nablus Road, the Israeli said he suddenly “heard a scream, turned around and saw the suspect with a knife in his hand, who then attempted to stab him,” according to a complaint filed with Jerusalem police. The man said he was able to wrestle the knife away from the attacker, who then fled.Police have the weapon and were searching the area for suspects.On Friday, police thwarted a terrorist attack in the capital’s southeastern Nof Zion neighborhood after receiving reports of a suspicious man eyeing Jewish houses.Border Police officers arrived and started questioning the man, a 21-year-old resident of the adjacent Jebl Mukaber neighborhood, and saw that his right hand was clenched.The officers distracted him, and saw that he had a knife up his sleeve, and so arrested him.In south Tel Aviv on Saturday, police thwarted a potential stabbing attack. A teenage male from the Hebron area was arrested while holding a screwdriver, district police said.Around 3 p.m., they received a call about a suspicious young man seen in the area of Etzel Street in the Hatikva neighborhood, Tel Aviv police said.Officers found the suspect – a 17-year-old resident of the Palestinian village of Yatta – holding a screwdriver while standing on the corner of Etzel and Bar-Lev streets. Police arrested the teen, who is now undergoing questioning, they said. No injuries were reported.Overnight Thursday, the IDF and the Border Police arrested 10 wanted security suspects in West Bank raids, most of them Hamas members. Two of the suspects allegedly took part in unorganized terrorist activities and violent disturbances.Arrests were made in Talluza, northeast of Nablus, where the IDF nabbed a Hamas member; in A-Ram, adjacent to Ramallah, where a Hamas operative was arrested; and Beitunya, southwest of Ramallah, where a third Hamas member was arrested.Additional arrests were carried out in the Ayda refugee camp, north of Bethlehem, Shawawra, northeast of Bethlehem, and Sheikh Sa’ad, northeast of the city.Security personnel also raided a building in Hebron, arresting a Hamas member there, and made arrests in two nearby villages.