Two rockets from Sinai explode in southern Israel; none hurt

No air raid sirens were activated in the area as the projectiles were headed toward open territory. 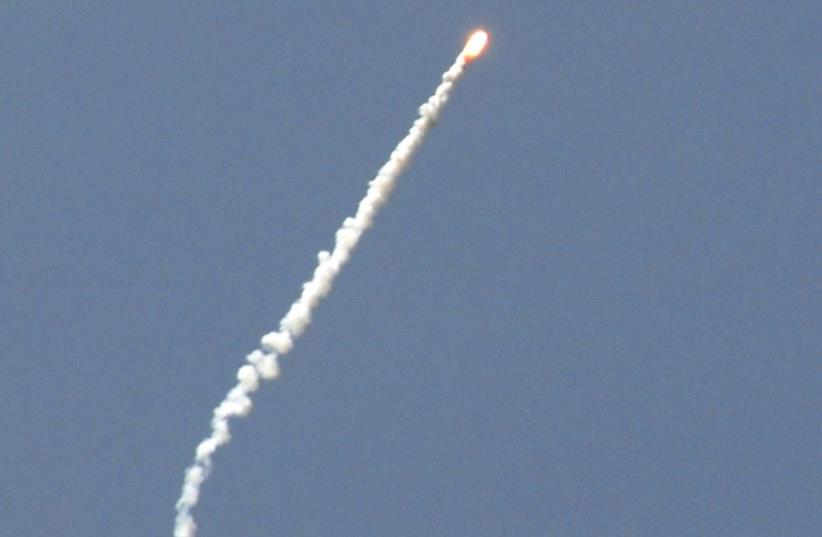 Rocket's smoke trail in Israel
(photo credit: REUTERS)
Advertisement
Two rockets launched from the Sinai Peninsula exploded near Moshav Naveh in southern Israel’s Eshkol Regional Council on Monday morning, the IDF reported.No air-raid sirens were activated in the area as the projectiles were headed toward open territory, a military source added. There were no reports of injury or damage.Monday’s rocket attack came the day after Islamic State-linked media claimed that an unmanned Israeli drone had bombed and killed five members of ISIS in Egypt in the northern Sinai.According to the Islamic State-linked Amaq agency, the five “fell as martyrs to the Jewish enemy” in a strike that targeted a car carrying the terrorists in the village of Shibana south of Rafah, near the Egypt-Israel border.The IDF has not commented on the claim, but Israel is reported to have carried out drone strikes “with Egypt’s knowledge and blessing” against terrorists in the restive peninsula.Earlier this month the group claimed responsibility for a rocket barrage fired from Sinai at Israel’s Red Sea resort of city of Eilat. The Iron Dome missile system intercepted three missiles, while a fourth landed in open territory.There were no casualties but at least four people were treated for anxiety.The group said the attack was launched “in order to teach the Jews and the Crusaders a proxy war will not avail them of anything” and threatened future “calamitous” attacks.Israel has not retaliated against the latest attack.A rocket that was fired into Israel from the Sinai.(photo credit: ISRAEL POLICE)
Israel has a 240-kilometer border with Sinai and since Egyptian President Abdel Fatah al-Sisi’s rise to power, Cairo and Jerusalem have been closely cooperating in Sinai in the fight against ISIS terrorists. According to an infographic released by ISIS, the jihadist group operates in Arish, Bir Abd and Sheikh Zuweidin in Sinai.Sisi has waged extensive military operations against Islamic State terrorists in Sinai, and in January said that 25,000 soldiers have been deployed there to fight the jihadists. Despite the small size of the group in the peninsula, the group is considered by many to be one of the most effective ISIS franchises outside Syria and Iraq and has carried out numerous deadly attacks on Egyptian security forces.On Friday, three Egyptian soldiers and four others were wounded after ISIS fighters targeted an Egyptian Army tank near the central Sinai town of Hasna. An Egyptian policeman was also critically wounded after being shot in the head by an unidentified gunman at a government checkpoint in el-Arish.Earlier this month, 14 gunmen were arrested by the Egyptian Army during a military campaign in northern Sinai. Three car bombs were also reported to be destroyed, while other explosive devices, weapons, communication devices, and military clothing were seized by Egyptian forces.While Israel is not the terrorist group’s principal target, and incidents along the Israel-Egypt border are rare, there have been several attacks, some deadly, in recent years.
Advertisement
Subscribe for our daily newsletter