The Civil Administration is working on a plan to relocate the communities and offer them alternative housing sites, but is far from completing the process. 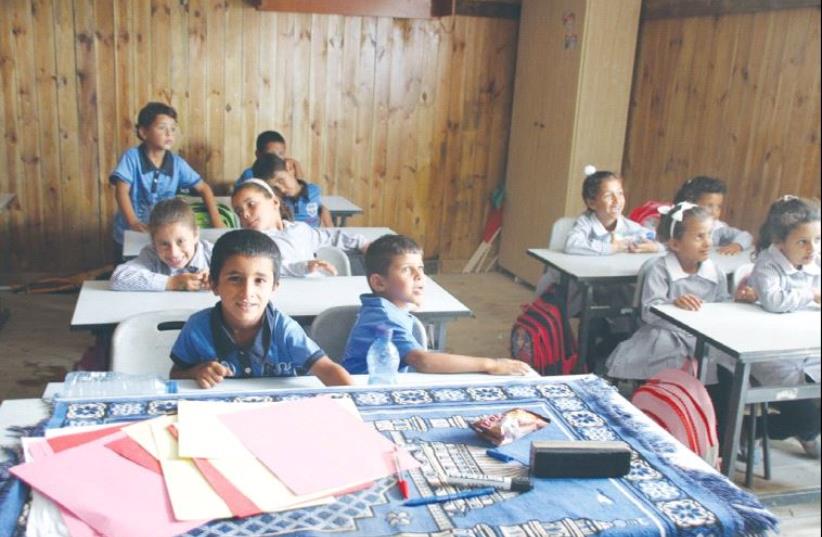 CHILDREN SIT at a Beduin school in al Khan al Amar in the West Bank yesterday. The school is slated for demolition.
(photo credit: TOVAH LAZAROFF)
Advertisement
Forty-six Palestinian herding and Beduin West Bank communities outside of Jerusalem are at risk of population transfer, the United Nations warned on Wednesday as a top official attended a protest ceremony against the pending IDF demolition of a small, unauthorized school in one of those encampments.Under a hot morning sun, David Carden, who heads the UN’s West Bank Office for the Coordination of Humanitarian Affairs, sat with Palestinian officials at a long folding table, set up on an artificial green lawn outside the eight-room compound, nicknamed “the tire school.” It services some 170 boys and girls from grades one to nine.Communities such as this one, Khan al-Ahmar, “in the central West Bank [are] identified as being at risk of forcible transfer due to Israeli ‘relocation’ plans,” Carden said.These people are “among the scores of vulnerable Palestinian communities across the occupied Palestinian territory who struggle daily to meet their basic needs and realize their rights in a coercive environment that creates pressure on them to leave their homes,” he said.Above his head plastic Palestinian flags hung off on a string that was stretched out across the lawn.The small community of temporary shacks and modular structures is located on a small ridge off of Route 1, between Jerusalem and Jericho.The school was built in 2009 out of mud and tires, primarily with funds from the Italian non-governmental group, Vento di Terra. It also has the support of the UN, including Carden’s office.The Civil Administration issued a demolition order against it because it was built without permits. Since then it has been the subject of a number of High Court of Justice cases, the latest of which was filed this year by the nearby settlement of Kfar Adumim, which wants the government to remove both the school and the community around it.Defense Minister Avigdor Liberman is expected to issue his opinion on the matter next week.Both he and Prime Minister Benjamin Netanyahu are under pressure from their right-wing supporters to demolish unauthorized Palestinian and Beduin constructions. At the same time the international community has come out strongly against Israel.The right-wing groups and politicians believe that the construction is strategic and part of a plan by the Palestinian Authority to increase its hold in Area C, particularly in the corridor between Jerusalem and Jericho.The Jerusalem Periphery Forum has in the past pointed out that many of these communities are strategically located along Route 1.The Civil Administration is working on a plan to relocate the communities and offer them alternative housing sites, but is far from completing the process.The UN and the European Union believe that such a plan is tantamount to forced transfer, particularly in a situation where requests for building permits are rarely granted.They fear that there are some 10,000 Palestinians and Beduin who are in danger of relocation.“We continue to call on the Israeli authorities to fulfill their obligations as an occupying power and to rescind all policies and practices that – directly or indirectly – lead to the forcible transfer of Palestinian Bedouin families,” Carden said.Education Minister Sabri Saidam thanked Carden and few dozen international officials that arrived at the ceremony.The PA opens its schools next week, but pupils of the “tire school” will begin this week, a decision likely taken in case the school is forced to close – hence becoming a protest move.Saidam said that his office runs 26 schools in Beduin communities that service 1,865 pupils. Numerous demolitions orders have been issued against them, he said.He asked the foreign officials who were present to write a protest letter to their governments, stating that Israeli “bulldozers” are being met “by a book, a pencil and a paper.”