Many of the Palestinians living in Area C have inadequate housing, shelters do not protect the residents from the heat, communities that were previously prosperous have become reliant on food aid. 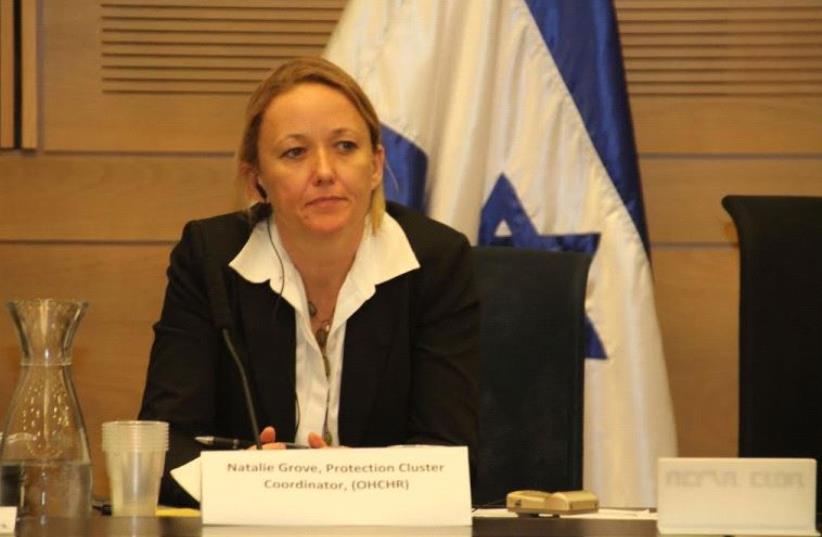 Natalie Grove, OHCHR (UN Office of the High Commissioner for Human Rights)
(photo credit: TOVAH LAZAROFF)
Advertisement
Israel has created conditions on the ground that force Palestinians to leave Area C of the West Bank, which is tantamount to a creeping annexation of the area, warned the United Nations on Wednesday.The country’s “policies and practices have created a highly coercive environment in Area C that forces people [Palestinians] to leave,” said Natalie Grove, who is a representative of the UN’s Office of the High Commissioner for Human Rights.She spoke as part of an unusual conference in the Knesset that was organized by left-wing politicians, including Joint List chairman Ayman Odeh, to highlight Israeli actions against Palestinians in Area C of the West Bank, which is under Israeli military and civil control.“Forcible [population] transfer is a great breach of the Geneva Convention,” Grove said.“Israel creates humanitarian need in a place where it should be addressing it. When the humanitarian community seeks to address these needs, Israel tries to prevent it,” she said.Grove and Odeh charged that Israel was taking such actions to put in place a policy of creeping annexation.As the “occupying” power, Israel has obligations both under international humanitarian law and human rights law toward the Palestinians, she said.They have the “status of protected population” and the UN is mandated to advocate for their rights, including the right to receive humanitarian assistance, she said.“The occupying power has the primary responsibility to meet the basic needs of the population in Area C. It does not do so,” she said.Many of the Palestinians living in Area C have inadequate housing, shelters do not protect the residents from the heat, communities that were previously prosperous have become reliant on food aid.“Primary school children walk long distances to reach their nearest school, 180 communities are not connected to a water network, and obtaining building permits is virtually impossible,” Grove said.“Palestinians who attempt to repair or upgrade their homes risk demolitions, those who install solar panels risk demolitions, those who dare to install a children’s play center risk demolitions,” Grove said.EU Ambassador to Israel Lars Faaborg-Andersen said at the conference that preserving Area C as a major land reserve for Palestinians is critical to the viability of their future state.It is for this reason, he said, that the EU has invested €21 million in the last two years for economic development and humanitarian assistance in Area C, including providing modular housing for Palestinians who lack proper shelter and homes.Israel has cordoned off some 70 percent of Area C for its own use and has done little to help Palestinians develop a viable life there.“Nearly all of the remaining 30 percent of Area C, much of which is private Palestinian property, is off limits for Palestinian development, because it requires permits that are almost never granted [by Israel],” Faaborg-Andersen said.Israel’s civil administration granted the Palestinians only one permit in 2014 and none in 2015, Faaborg-Andersen said. Only 34 building permits in Area C out of 2,000 applications were granted to Palestinians from the years 2009 to 2013. Out of 108 master plans that were submitted to the civil administration, only a handful have been approved, he added.At the same time, settler building continues, at a rate of approximately 1,500 new homes a year, he said.He called on Israel to give Palestinians building permits and to stop demolishing illegally built structures.In the last seven to eight years the EU has begun to offer Palestinians modular structures to use as homes, even though it has not received permits from Israel for such structures.Its support of such illegal Palestinian construction is one of the points of tension between Israel and the EU, which views such actions as a legitimate form of humanitarian aid.Faaborg-Andersen said that in the first six months of 2016, the civil administration has confiscated 91 such structures, which were funded by either the EU or its member states. He noted that in all of 2015, only 75 such structures were taken down.There are also some 600 such EU structures for which Israel has issued demolition and stop-work notices, he said.Ultimately, what is needed is a resumption of the negotiations between Israel and Palestinians so that two-state solution can be put in place, Faaborg-Andersen said.Odeh added that the Palestinians have no intention of going anywhere.“Our fight will continue until the creation of a Palestinian state,” he said.This “is not just a Palestinian interest, but in the interest of all those who live here and seek peace,” Odeh said.The diplomats and politicians were joined by a number of Palestinians who testified about the hardships of life in Area C.MK Yehudah Glick (Likud), who lives in the Otniel settlement, was the only rightwing politician who spoke.He said that while he does not believe a Palestinian state will be created, he was moved by the stories that the Palestinians told and believes that their conditions should be improved.