On Iran and North Korea, "The tone might be just slightly tougher, but the substance is almost identical (to the previous administration)." 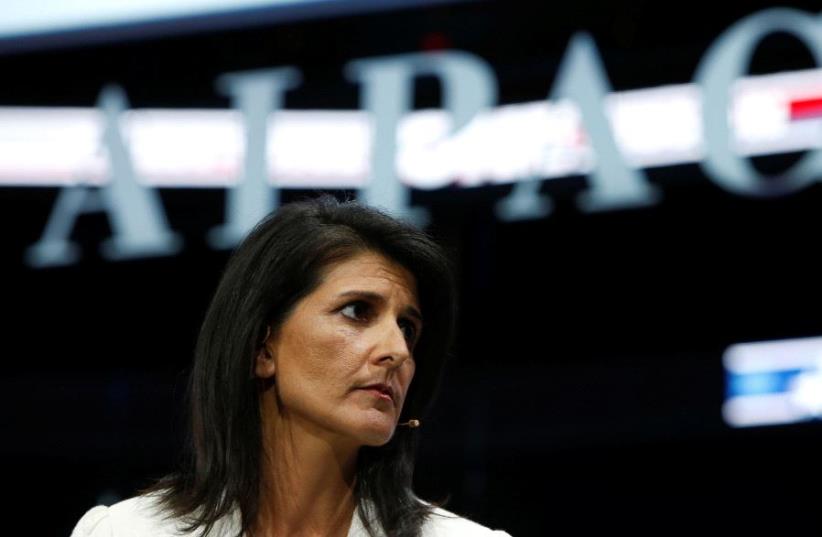 U.S. Ambassador to the United Nations NIkki Haley speaks to the American Israel Public Affairs Committee (AIPAC) policy conference in Washington, US
(photo credit: REUTERS)
Advertisement
UNITED NATIONS - Nikki Haley has made a tough-talking debut as US President Donald Trump's envoy to the United Nations but her counterparts on the powerful Security Council are waiting to see if that will translate into policies differing from those of the Obama administration on crises from South Sudan and Somalia to Yemen and North Korea.Although Haley is one of the few veteran politicians in Trump's Cabinet, her diplomatic prowess is facing an early test as she represents an administration with policies that are unclear and top foreign policy posts that are empty."There's only two subjects where there is some kind of determined policy: the Middle East and also [UN] budget cuts, especially peacekeeping," said a senior council diplomat, speaking on condition of anonymity.Haley assumes the monthly presidency of the 15-member council in April, adding to the challenge as the Trump administration moves to slash US financial support for the world body.US Secretary of State Rex Tillerson has kept a low profile, leaving the former Republican governor of South Carolina as the face of US foreign policy after Trump himself."She's establishing for herself quite a lot of leeway in terms of pursuing things the way she wants to pursue them here in New York," said a second senior Security Council diplomat.But the diplomat said that on Iran and North Korea: "The tone might be just slightly tougher, but the substance is almost identical (to the previous administration)."Haley has said that while it would be difficult to reimpose sanctions on Iran that were removed under a 2015 deal with world powers to curb Tehran's nuclear program, the United States is "going to watch them like a hawk." The Trump administration is reviewing how to handle a North Korea that continues to press its missile and nuclear weapons programs despite UN sanctions."The problem is the whole administration is still in the making. They don't have many officials who are responsible for policy," said the first senior diplomat. "There's a huge difference between what they want and what they do."While Trump pledged to build closer ties with Moscow when he took office on Jan. 20, Haley has followed in the footsteps of her predecessor, President Barack Obama's envoy Samantha Power, in confronting Russia over its seizure of Crimea and for protecting Syria's government from council action."On Russia handling, there's been a lot of speculation about different views from members of the administration, but... she has been at the tough end of the spectrum, and has now done that on multiple occasions," the second diplomat said.'NEW SHERIFF'Haley appears set for a clash with Russia and China over her plans to hold a council meeting in April on human rights."It will be very telling if any country tries to block this debate," Haley told the Council on Foreign Relations in New York on Wednesday.Moscow and Beijing say rights discussions should be confined to the Geneva-based UN Human Rights Council, which Washington has threatened to quit unless its agenda drops what a senior State Department official has called an "obsession with Israel."
US Ambassador to the UN Haley discusses anti-Israel bias
Haley said this week that during her first two months she dampened "Israel-bashing" at the United Nations by preventing a Palestinian from being appointed UN envoy to Libya and demanding UN chief Antonio Guterres withdraw a report accusing Israel of imposing an "apartheid regime" on Palestinians."For anyone that says you can't get anything done at the UN, they need to know there's a new sheriff in town," she told a conference of the largest US pro-Israel lobbying group on Monday."There is a gap between her tough public posturing, designed for domestic consumption, and her positions within the UN... She will have to close this visible gap," said a third Security Council diplomat.Another priority for Haley is reviewing all 16 UN peacekeeping missions to cut costs, and plans to hold a council meeting on the issue in April. Washington is the top contributor, paying 28.5 percent of the $7.9 billion annual peacekeeping budget."So far we don't have a very clear idea of how that is going to play out," said a fourth Security Council diplomat."She has underwhelmed us here at the UN for the simple reason that hard-line statements have come from Washington about cutting funding," said a senior UN diplomat who is not a member of the Security Council. "People are waiting and watching."