Israel, backed by its ally the United States, accuses the Geneva-based Human Rights Council of bias against it. 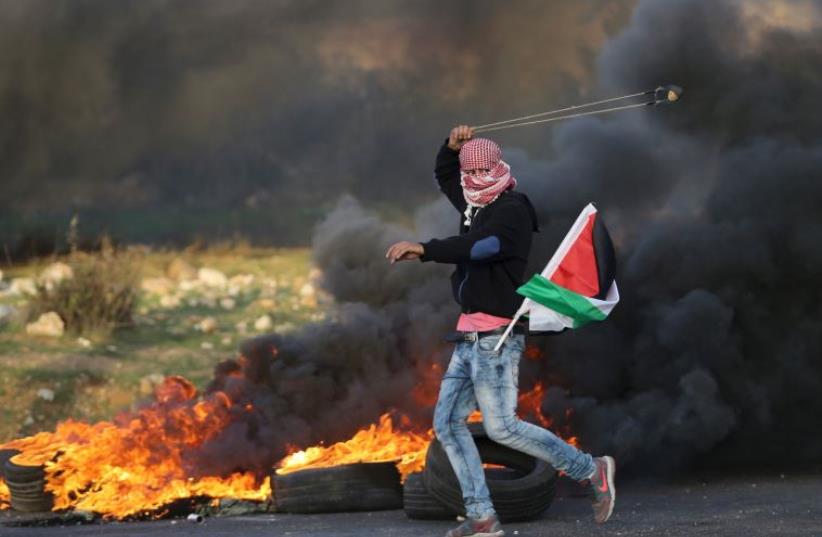 A Palestinian protester uses a sling to throw stones towards Israeli troops during clashes, near the Jewish settlement of Bet El, near the West Bank city of Ramallah November 29, 2015
(photo credit: REUTERS)
Advertisement
The UN human rights investigator for Gaza and the West Bank called on Israel on Thursday to investigate what he called excessive force used by Israeli security forces against Palestinians and to prosecute perpetrators.Makarim Wibisono, United Nations special rapporteur on human rights in the Palestinian territories, also challenged Israeli authorities to charge or release all Palestinian prisoners being held under lengthy administrative detention, including children."The upsurge in violence is a grim reminder of the unsustainable human rights situation in the Occupied Palestinian Territory and the volatile environment it engenders," he said in a final report to the Human Rights Council.Israel, backed by its ally the United States, accuses the Geneva-based forum of bias against it.Twenty-seven Israelis and a US citizen have been killed since October in near-daily Palestinian attacks that have included stabbings, shootings and car-rammings. Israeli forces, for their part, have killed at least 157 Palestinians, 101 of them assailants, according to Israeli authorities. The spokesman for Israel's Foreign Ministry declined to give an immediate response, saying he was looking into Wibisono's remarks. Wibisono announced his resignation from the independent post last month, effective March 31, accusing Israel of reneging on its pledge to grant him access to Gaza and the West Bank. Wibisino said any individual violence was unacceptable.He said the upsurge came against a backdrop of "illegal" Jewish settlements in the West Bank, including east Jerusalem, construction of a wall, and Israel's blockade of Gaza that amounted to a "stranglehold" and "collective punishment."Israel must address these issues to uphold international law and ensure protection for Palestinians, he said.Israel captured the West Bank, Gaza Strip and east Jerusalem in the 1967 Middle East war and later annexed east Jerusalem, declaring it part of its eternal, indivisible capital, a move never recognized internationally.Some 5,680 Palestinians were detained by Israel as of the end of October 2015, including hundreds of minors, Wibisono said, citing figures from the Israeli human rights group B'Tselem. Regarding those under administrative detention, he said: "Hundreds of Palestinians being held, now including children, often under secret evidence, and for up to six-month terms that can be renewed indefinitely, is not consistent with international human rights standards.""The government of Israel should promptly charge or release all administrative detainees."