UNESCO director-general indicates Israeli minister should resume cooperation with the body after he suspended it following a contentious vote on Jerusalem holy sites. 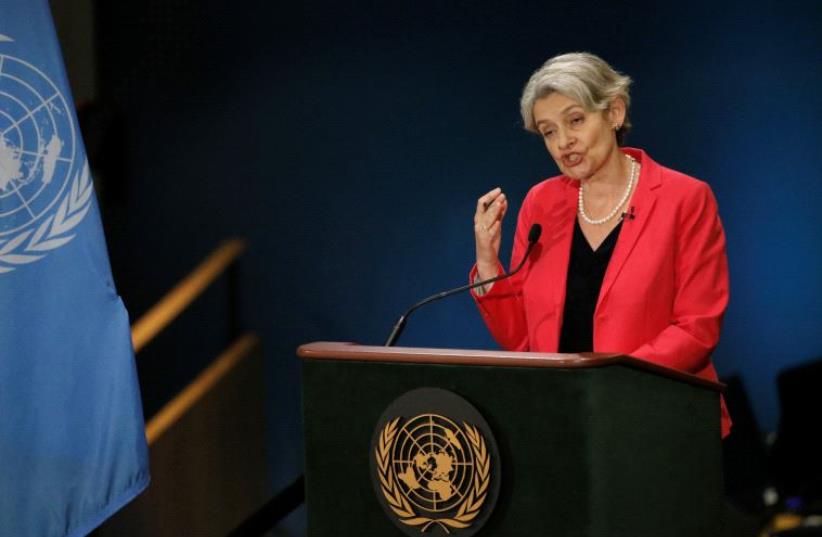 United Nations cultural organization UNESCO Director-General Irina Bokova of Bulgaria speaks during a debate in the United Nations General Assembly between candidates vying to be the next UN Secretary General at UN headquarters in Manhattan, New York, US, July 12, 2016
(photo credit: REUTERS)
Advertisement
The director-general of UNESCO, Irina Bokova, has further attempted to distance herself from preliminary approval by the UN body's member states of a resolution that denies Jewish ties to the Temple Mount and the Western Wall. Israel harshly condemned the October 13 vote to expunge any Jewish connection to the religion's top holy sites and refer to them only by their Muslim names, leading Education Minister Naftali Bennett to freeze all Israeli cooperation with UNESCO. While Bokova had previously criticized the draft decision, Bennett, the head of Israel’s National Commission to UNESCO said that her statement against the resolution was not enough, adding that the move only encourage Palestinian terrorism against Israel.In a letter dated October 18, Bokova responded to Bennett underlining that UNESCO's member states, and not the agency's director-general, had made the decision. In the correspondence, she recalled a former statement she had issued on the "indivisible" heritage of Jerusalem, noting that "each of [Jerusalem's] communities has a right to the explicit recognition of their history and relationship with the city.""I firmly believe that to deny or conceal any of the Jewish, Christian or Muslim traditions undermines the integrity of the sites, and runs counter to the reasons that justified its inscription on the World Heritage list in 1981," she added. Bokova wrote to Bennett of her "absolute commitment to continue all efforts in countering all forms of anti-Semitism, including those drawing on partial or distorted visions of culture and history, as well as those that seek to challenge the existence of Israel."The UNESCO chief in effect also urged Bennett to resume Israeli cooperation with body, saying "To succeed we need the full engagement of all Member States."The motion on Jerusalem's holy site was approved 24-6 by the 58-member Executive Board of the United Nations Educational, Scientific and Cultural Organization. Twenty-six member countries abstained from the vote, with Mexico later retracting its support for the text.Italy, which abstained from the vote, said over the weekend that it would try to influence other European countries to vote against these types of anti-Israel resolutions in the future.A similar type of anti-Israel resolution – this one to reaffirm the placement of Jerusalem’s Old City on a list of World Heritage Sites in danger – will come before UNESCO’s 21-member World Heritage Committee when it meets from Monday to Wednesday this week. The committee is made up of the following states: Angola, Azerbaijan, Burkina Faso, Croatia, Cuba, Finland, Indonesia, Jamaica, Kazakhstan, Kuwait, Lebanon, Peru, the Philippines, Poland, Portugal, Republic of Korea, Tunisia, Turkey, Tanzania, Vietnam and Zimbabwe.The vote is routine, but the text – much like the one that was approved on October 13 by UNESCO’s Executive Board – refers to the Temple Mount only by its Arabic name, al-Haram al-Sharif. Since 2015, the Palestinian Authority has pushed to change the language UNESCO uses to speaks of Jerusalem and the holy sites, so that they are referred to almost exclusively by their Arabic names. As part of that drive, the PA, or members of the UN’s Arab group, submits Jerusalem resolutions to UNESCO at every possible opportunity.

Tovah Lazaroff and Herb Keinon contributed to this report.