The United Nations and the European Union also condemned the new settlement activity. 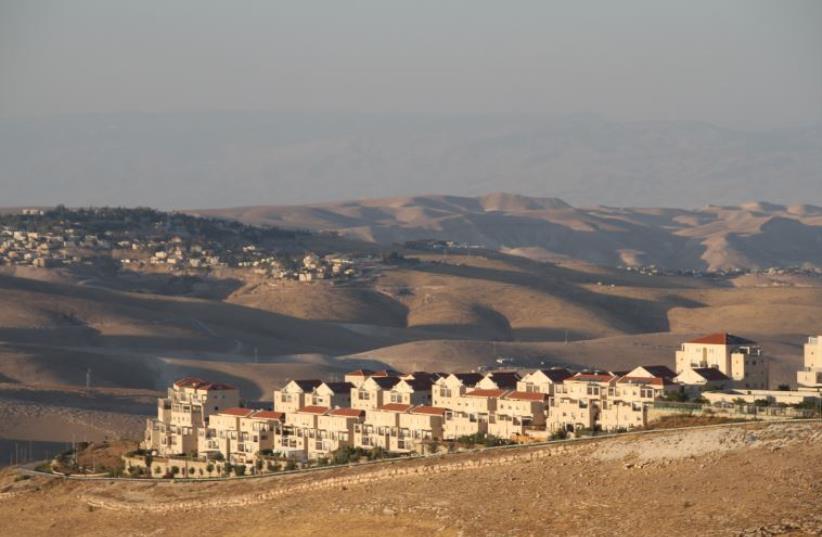 Maaleh Adumim
(photo credit: TOVAH LAZAROFF)
Advertisement
The United States on Tuesday issued an unusually harsh statement against settlement activity in which it accused Israel of “systematically seizing Palestinian land” in the West Bank.US State Department spokesman John Kirby further charged that such seizures plus “settlement expansions and legalization of outposts is fundamentally undermining the prospects for a two-state solution.”He spoke to reporters in Washington from a prepared text in response to a query about Israel’s decision earlier this week to advance plans for 560 new homes in the West Bank settlement of Ma’aleh Adumim. It addition, there were reports that it had authorized 240 new homes in the Jewish east Jerusalem neighborhoods of Har Homa and Ramot.The announcements of settlement activity were made in the wake of two terror attacks that claimed the lives of Hallel Yaffa Ariel, 13, and Rabbi Michael “Miki” Mark, 47.Ariel holds duel Israeli-US citizenship as does Mark’s wife Chava and his two children, all of whom were injured when Palestinian gunmen fired at their vehicle.Israel has traditionally linked settlement building or the advancement of plans with terror attacks, out of a belief that it is the best response to such violence.One reporter asked Kirby if he felt this was an appropriate linkage.“There is no justification for terrorism,” said Kirby. However, he added, “that doesn’t change our opposition to settlement activity.”Right wing Israeli politicians have criticized Netanyahu for the move, noting that the new activity, was not that significant. Agriculture Minister Uri Ariel called on the government to authorize thousands of new units in West Bank settlements.But in spite of the limited scope of Israel’s settlement announcement, the US went well beyond its boiler plate response.It also criticized Israel for the Jewish population growth over the pre-1967 lines, both in east Jerusalem and in Area C of the West Bank, known to settlers as Judea and Samaria.“Moreover, approximately 100 settlement outposts in Area C have been built without formal Israeli Government approval, making them illegal even under Israeli law. Again, as the Quartet report makes clear, these actions risk entrenching a one-state reality and raise serious questions about Israel’s long-term intentions,” Kirby said.The United Nations and the European Union also condemned the new settlement activity. But it was a standard response that was not nearly as harsh as the US statement.Late last week the Middle East Quartet called on Israel to cease settlement construction and expansion in a report that it issued.But the issue of settlement activity was only one, of many issues, raised by the Quartet in its report. The Palestinian Authority is disappointed with the document which it had hoped would blame the frozen peace process on settlement construction. Publication of the report was delayed by almost a month. It is presumed that Quartet — Russia, the US, the EU and the UN — spent the extra time toning down the document under pressure from the US.The London-based Arabic language daily newspaper al-Hayat reported Tuesday that the PA decided to halt its cooperation with the Quartet on the Middle East following the report.PA Prime Minister Rami Hamdallah’s office said, however, that the relationship with the Quartet had not been severed.“The Palestinian Leadership expressed its dissatisfaction with the recent Quartet Report. The Report offers an imbalanced assessment of the realities on the ground, and equates between the victim and the colonizer, while giving Israeli settlers a pass. As far as "cutting ties"---no official statement or decision has been made as of now,” said Hamdallah’s Director of Communications, Jamal Dajani.In Washington Kirby said, in response to the al-Hayat report, that all his office had seen was “a PLO statement that takes issue with some aspects of the Quartet report, and that’s our understanding, is that this is more a statement of their concerns and objections to the report itself.”