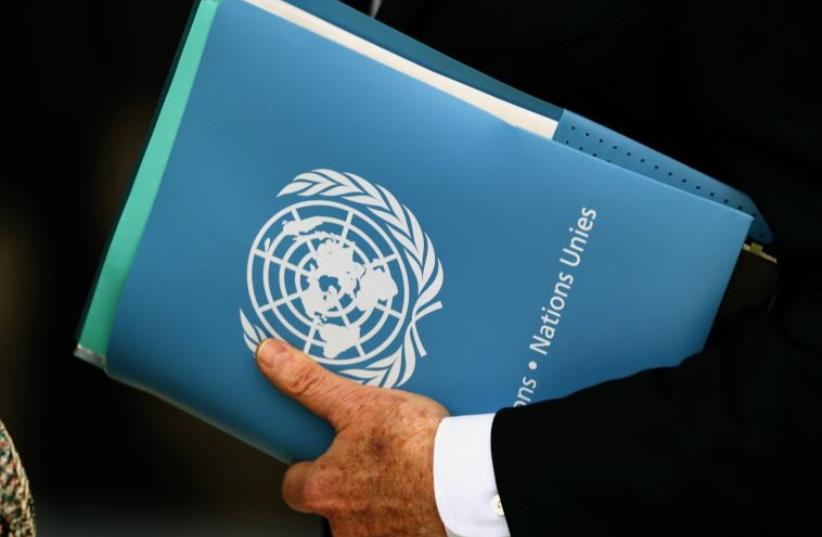 Envoy holds folder at the 31st Session of the Human Rights Council at the U.N. European headquarters in Geneva, Switzerland
(photo credit: REUTERS)
Advertisement
The United States reclaimed its seat on the United Nations Human Rights Council on Friday and immediately called for a change in its treatment of Israel.“While important challenges remain, including ending the council’s excessive and biased focus on Israel, we look forward to cooperating with other council members to address human rights concerns, advance human rights around the world, and ensure the Council fully realizes its purpose,” US Secretary of State John Kerry said.He spoke following a UN General Assembly vote to elect 14 new council members.The elections are held annually, for three-year terms, and no member state can sit on the council for more than two consecutive terms.The US ended its six years on the council in 2015. During that time, it was the one consistent vote in support of Israel on the UNHRC, which spends more time condemning the Jewish state than any genuine human rights abusers.Aside from the US, the following countries will begin serving on the council in 2017: Brazil, Croatia, Egypt, Hungary, Iraq, Japan, Rwanda and Tunisia. Cuba, Saudi Arabia, China, South Africa and Great Britain are already on the council and will be serving second terms.“The re-election of China, Cuba and Saudi Arabia – regimes which systematically violate the human rights of their citizens – casts a shadow upon the reputation of the United Nations,” said UN Watch executive director Hillel Neuer.A Saudi Arabia-led military campaign in Yemen has been criticized for killing civilians.UN sanctions monitors have accused the Saudi-led coalition, Houthi rebels and Yemen government troops of violating international humanitarian and human rights laws.Russia failed to win reelection to the UNHRC, and was beaten out by Hungary and Croatia, following lobbying by rights groups against Moscow’s candidacy due to its military support for the Syrian government.In a secret ballot by the 193-member UN General Assembly, Hungary received 144 votes, followed by Croatia with 114 votes and Russia with 112 votes. Russian UN Ambassador Vitaly Churkin said Moscow had faced good competition.“It was a very close vote,” Churkin told reporters. “Croatia, Hungary – they are fortunate because of their size they are not as exposed to the winds of international diplomacy; Russia is quite exposed.”“We have been there a number of years, I’m sure next time we’re going to get in,” he said.Russian air power has been backing Syrian President Bashar Assad’s forces in the country’s nearly six-year war.A recent offensive to capture eastern Aleppo – the rebel- held half of Syria’s largest city – has sparked international outrage.“UN member states have sent a strong message to the Kremlin about its support for a regime that has perpetrated so much atrocity in Syria,” said Louis Charbonneau, Human Rights Watch UN director.