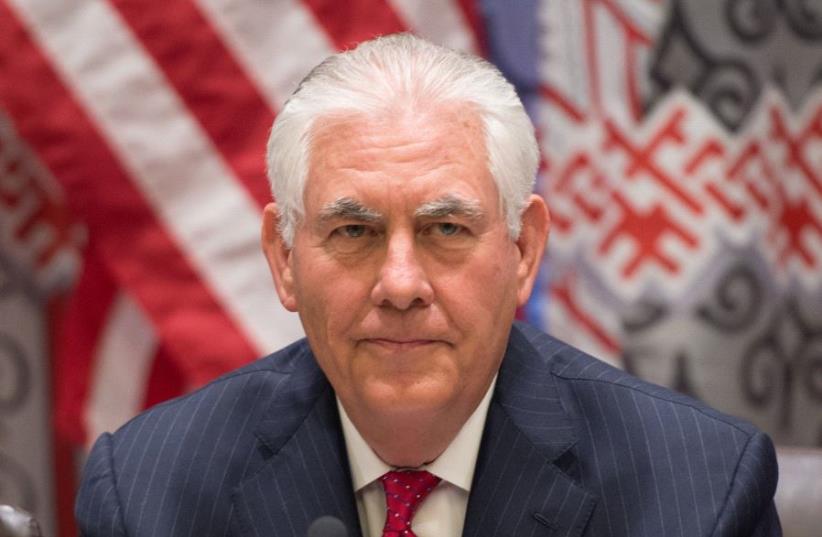 US Secretary of State Rex Tillerson
(photo credit: REUTERS)
Advertisement
The Trump administration’s plan to resolve the Israeli-Palestinian conflict is at an advanced stage, US Secretary of State Rex Tillerson said on Wednesday in Jordan as part of his weeklong regional visit.“It’ll be up to the president to decide when he feels it’s time and he’s ready to put that plan forward,” he said. “I will say it’s fairly well advanced.”Tillerson sidestepped speculative questions as to whether US President Donald Trump planned to unveil that plan in the coming months. “I don’t want to get in front of the president or his team that’s been working on that,” he told reporters.“I have seen the plan, the elements of the plan,” he said. “It’s been under development for a number of months. I have consulted with them on the plan, identified areas that we feel need further work.”Tillerson spoke just two days after Palestinian Authority President Mahmoud Abbas met with Russian President Vladimir Putin in Moscow to seek backing for a peace process that does not have the US as the main interlocutor.In an interview with Michel Ghandour of Alhurra TV, Tillerson called on the Palestinians to return to the negotiating table.“I understand President Abbas, his concern about certain steps and decisions taken by the United States,” he said. “We hope that President Abbas will find his way back to the table.”The Palestinians have sought to replace the US in the peace process since Trump announced that he recognized Jerusalem as Israel’s capital.At the press conference in Jordan, Tillerson said: “President Trump remains committed to seeing a Middle East peace process go forward and, as I indicated, I think the decision taken on Jerusalem was about the United States and our recognition of Jerusalem and where we choose to place our embassy,” Tillerson said.“But the president was clear also in his statement, and as I just indicated in my statement, that the final status, the final borders in Jerusalem are up to the parties to decide,” he said. :So it does not preclude a two-state solution. If that is the solution the parties seek, the US would support that.”Jordan and its leader, King Abdullah, have an important role to play in facilitating the peace process, Tillerson said. Trump is committed “to respecting Jordan’s role as the custodian of the holy sites.”Jordanian Foreign Minister Ayman Safadi told Tillerson that while his government and the Trump administration differed on its solutions to the Israeli-Palestinian conflict, they shared a common desire to resolve it.Safadi said he believed a two-state solution at the pre-1967 lines, with east Jerusalem as the capital of a Palestinian state, is on the path to “comprehensive” peace.Tillerson’s visit comes in the midst of the first public spat between Trump and Prime Minister Benjamin Netanyahu. The White House rebuked Netanyahu for making it appear as he if was talking with the US about plans to annex West Bank settlements and giving the impression that it was something that could be done in coordination with the US.At the State Department on Tuesday, its spokeswoman, Heather Nauert, echoed the White House in stating that annexation “is not something that came up between the US and the government of Israel.”“We have been very clear about this, that additional settlement activity, unrestrained settlement activity, does not advance the prospect for peace,” she said.“We have also had numerous conversations with the government of Israel where the government of Israel has said that it would take into consideration before making decisions the president’s concern about unrestrained settlement activity,” Nauert said.