The research and details of the plan were overseen by Gen. John Allen, a Marine four-star general who had commanded US forces in Afghanistan. 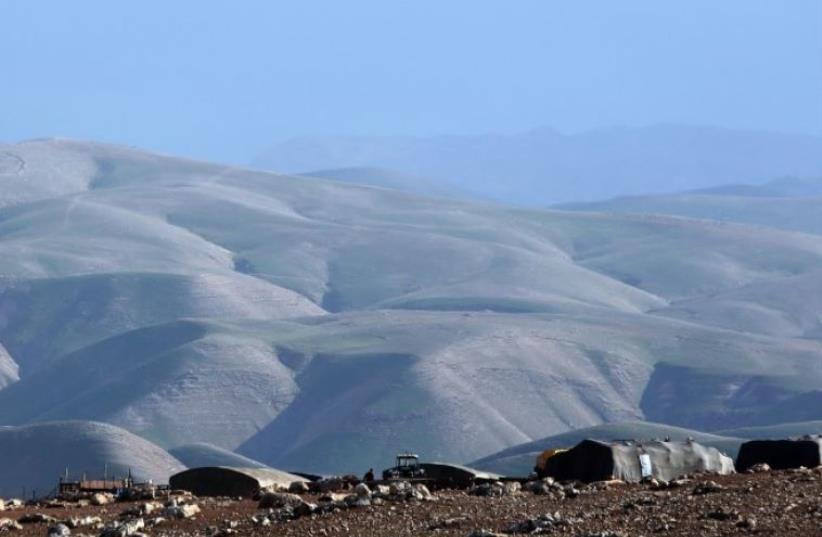 Beduin shepherds walk past tents setup in the Jordan Valley near West Bank city of Jericho
(photo credit: AFP PHOTO)
Advertisement
The United States government has prepared a comprehensive defense plan aimed at assuaging Israeli security concerns in the event that Jerusalem agrees to pull back its armed forces from the Jordan Valley as part of a future final-status treaty with the Palestinians.According to Channel 2, the plan envisages a “war room” that would include Israeli, Palestinian, and American security officials as well as joint Israeli-Palestinian patrols across the West Bank for an interim period of time – until the Palestinian security forces prove their ability to maintain control on the ground.The war room would be responsible for cobbling together all pieces of key intelligence and putting together operational plans on the basis of the incoming information.In the event of pinpoint intelligence indicating hostile activity, a Palestinian team of elite paramilitary forces – which would be trained and funded by the US - would be sent to track down and arrest would-be assailants.If the Palestinians were unable or unwilling to handle the situation, then the task would be carried out by Israeli security personnel.The research and details of the plan were overseen by Gen. John Allen, a Marine four-star general who had commanded US forces in Afghanistan. Its implementation was designed to span a number of years during which Israel would maintain both an overt and covert presence in the territories.As part of the plan, the Jordan Valley frontier would be outfitted with sophisticated surveillance and tracking technology on both the Israeli and Jordanian sides of the boundary.In addition, Israeli and Palestinian security force would conduct separate patrols in designated areas of the West Bank until the latter proves its effectiveness in keeping order on their own.Apprehensive over the stability and long-term viability of the Hashemite kingdom, the Israeli government has vowed to maintain overall security control of the Jordan Valley in any future arrangement with the Palestinians.The plan eventually became moot after Israeli-Palestinian peace negotiations broke down in the summer of 2014, triggered by the kidnapping of three Jewish teenagers and the subsequent Israel-Hamas war.Allen, who is currently in Israel as a guest of the Institute for National Security Studies, told Channel 2 that he came to believe the Israeli government sought to weaken the Palestinian Authority security forces while at the same time remaining distrustful of them due to rampant corruption and ineffective governance that was commonplace in Ramallah.“I had no intention of imposing the plan on Israel,” the general is quoted as telling Channel 2. “This was a bridging proposal for a diplomatic plan in the event that agreements [between Israel and the Palestinians] were not reached and there was a need for a solution to security concerns.”Allen said he was not offended by Israeli criticisms of his plan as “naïve” and “disconnected from reality.”“No Israeli saw the plan in its entirety because it wasn’t completed and it wasn’t presented,” he told Channel 2. “But the plan is being kept as a security basis for future negotiations with the Palestinians.”