US troubled by Israeli escalation of Palestinian home demolitions

“Such demolitions and evictions are harmful and provocative and indicative of a damaging trend," said US State Department Spokesperson. 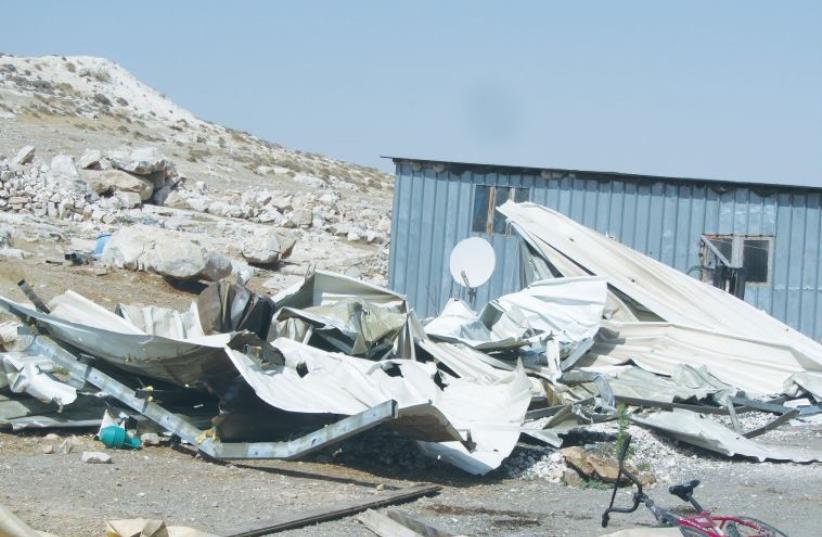 THE REMAINS left after the IDF demolished shacks belonging to Beduin living near Ma’aleh Adumim
(photo credit: B'TSELEM)
Advertisement
The United States said Thursday it was concerned by the number of illegal Palestinian residential structures Israel demolished this month in the West Bank and east Jerusalem.“We are also very troubled by the recent escalation of demolitions and evictions, which include the destruction of dozens of structures and the displacement of over 150 people in the West Bank and east Jerusalem this month alone,” US State Department Spokesperson John Kirby said on Thursday.“Such demolitions and evictions are harmful and provocative and indicative of a damaging trend, particularly given settlement-related activity and continued construction in the West Bank and east Jerusalem,” Kirby said.The European Union and the United Nation also urged Israel to stop razing of Palestinian structures.Kirby spoke hours after the Civil Administration demolished three shacks that housed three families in two different Palestinian Beduin herding villages in the Northern Valley. The two structures it razed in the community of Khitbet Einun, located five kilometers east of Tubas, had housed 11 people, including 7 minors and a sheep pen, according to the NGO B’Tselem, which monitors such demolitions.The Civil Administration then razed a home in the Khirbet a-Deir community, located between the Palestinian village Ein al-Beida and the Jordan border, according to B’Tselem. Its forces demolished a structure that had housed a family of eight, including three minors, B’Tselem said. The IDF also tore down an unused structure in the Khirbet Samra community, southeast of Tubas, the NGO added.The demolitions marked the third time this week the Civil Administration has razed illegal Palestinian structures.Earlier this week on Monday, the Civil Administration demolished 17 temporary structures in Palestinian Beduin herding communities in the area of Ma’aleh Adumim, of which 14 were residential, according to B'Tselem. The Civil Administration, however, said it had taken down only eight, which were illegally constructed on state land. It added that no one had even applied for a permit for those structures.On Tuesday, the Civil Administration demolished another 17 structures, of which 10 were residential and the rest used for livestock, B'Tselem said. The Civil Administration had no response to that report.Since August 5, the Civil Administration has taken down 61 unauthorized Palestinian temporary structures in herding communities in the area of the Jordan Valley and the Ma’aleh Adumim settlement, B'Tselem said. It added that 34 of those structures housed 186 people, including 111 minors.Last week, the Knesset Foreign Affairs and Defense Committee sub-committee on Judea and Samaria met with the Coordinator of Government Activities in the Territories Maj.-Gen. Yoav Mordechai and urged him to do more to combat illegal Palestinian construction in that area, which it warned was strategically placed to halt the expansion of Jewish settlement.