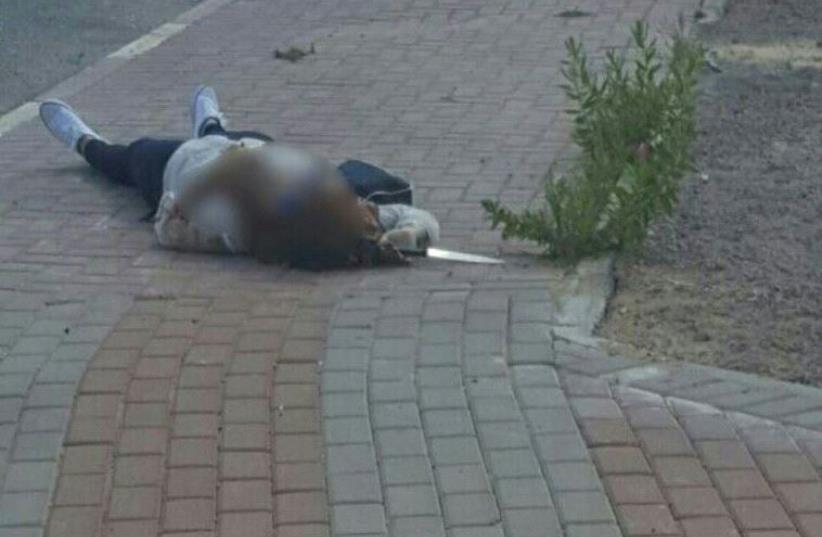 Scene of attempted stabbing attack in Tapuah Junction
(photo credit: ISRAEL POLICE)
Advertisement
A video which appeared to show four Israeli Border Police officers shooting a Palestinian assailant went viral on Thursday morning.The short clip opens in the middle of Wednesday's attack, when the assailant, identified on social medias as Raheeq Shajeea Mohammad Yousef, 19, is already lying on the ground a few feet away from a bus stop at the Tapuach Junction, in the Samaria region of the West Bank.The four policeman are seen already having drawn their guns and rapidly shooting bullets at her. They manage to fire some 10 bullets within seconds before halting their fire. In reporting on Wednesday's incident, police spokeswoman Luba Samri said that Yousef had aroused the suspicion of a border policeman who was at a lookout post by the junction. He warned the Border Police officers standing at the junction that she seemed suspicious.The security forces called out to Yousef to stop walking, but she refused, Samri said. They fired warning shots in the air, but Yousef continued walking toward them.When she was just a few meters away, she drew a knife, Samri said. At that point, the border policemen shot at her, killing her, Samri added.In response to the video, the police spokeswoman responded saying it did not capture the entire range of the events that happened.“The video presents only a partial picture of what happened because it is not possible to see the terrorist walking toward the police with a drawn knife, thereby endangering them. The moment the [the policemen] believe she is no longer a danger, they stop shooting and begin closing off the scene,” Samri said.She added that as with all similar incidents, the police are investigating the matter. In July, at a bus stop near where Wednesday's attack occurred, two soldiers wounded a female Palestinian assailant who had attempted to stab them and a civilian.A video of the attack was posted on YouTube. It was shot from a vehicle that passed the site of the attack, a bus stop at the Gitai Avisar junction near the Ariel settlement.The young female assailant held her hand up and clenched a knife. She walked slowly in the direction of two soldiers who had their rifles drawn.As she moved forward, one step at time, they walked backward. She moved closer to them and seemed almost about to lunge at them when they shot her. The woman fell to the ground, in the middle of the bus stop, and then rolled for a second on the pavement.No one else was wounded. The assailant was transferred to Beilinson Hospital in Petah Tikva, in serious but stable condition.