Violence breaks out at Arab riots in Ramle, Nazareth

Around 100 Israeli Arabs demonstrated illegally in Ramle and threw rocks at security forces that dispersed the demonstration. 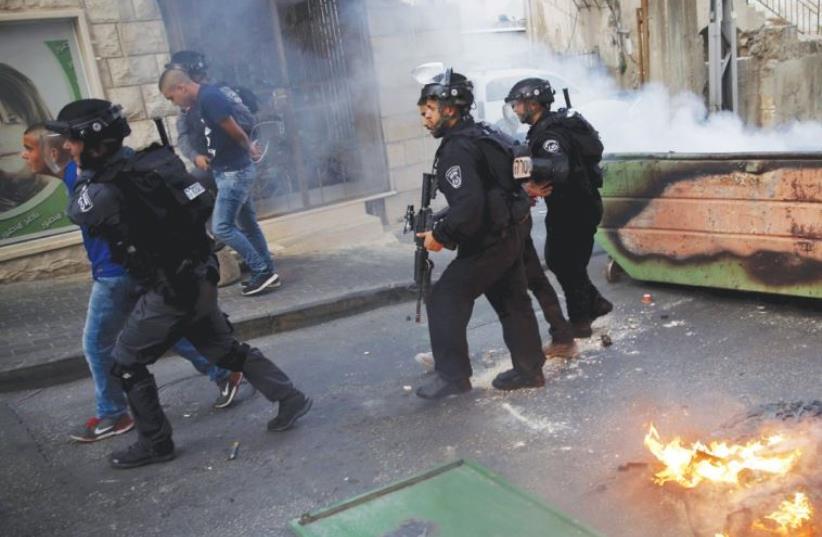 Police detain an Israeli-Arab rioter during disturbances in Nazareth
(photo credit: REUTERS)
Advertisement
Arabs rioted and protested throughout the country over the weekend, with violent altercations taking place in Ramle and Nazareth on Saturday.Around 100 Israeli Arabs demonstrated illegally in Ramle and threw rocks at security forces that dispersed the demonstration.In Ramle, scores of youths clashed with police and destroyed property, hurling stones and defacing traffic signs. At least 10 rioters were arrested by security forces.Ramle was the scene of a violent protest on Saturday night, when a group of around 100 locals, most of them young men, held a demonstration at the Bialik traffic circle in the city.During the protest, a number of masked youths blocked traffic and began throwing rocks at police. The rioting persisted off and on for a couple of hours, until police arrested 10 people on suspicion of throwing rocks.One of the protesters was lightly hurt and taken to hospital for treatment, police said.In Nazareth on Saturday night, a few dozen protesters blocked Paulos Street in the city and began burning dumpsters and throwing rocks at police.Riot police and Border Police officers arrested seven of the rioters, all of them Nazareth locals aged 18 to 39.Fayez Eshtiwy, the owner and general manager of the popular Israeli-Arab news website Kul al-Arab at alarab.net told The Jerusalem Post in an interview on Saturday night that he sees things quieting down in the coming week.He said that the key issue for Arabs is the Aksa Mosque on the Temple Mount. If it is quiet there, it will be quiet elsewhere. “When Jewish extremist activists go to the Aksa Mosque it inflames the situation,” he said.Eshtiwy also said that Palestinian Authority President Mahmoud Abbas said that Israeli Arabs should seek to calm the situation.“Tomorrow [Sunday] things should go back to normal,” he said, adding that Israeli Arabs should be allowed to return to visit Aksa Mosque.Also in the North, small groups of rioters blocked off streets in Kafr Kana and Kafr Manda.Saturday’s riots included disturbances in Taibe and Kalansua in the Triangle, and Rahat in the Negev.Arab MKs were planning to visit the Temple Mount on Sunday, but on Saturday night reconsidered because of concern they would be playing into Prime Minister Benjamin Netanyahu’s hands.MK Yinon Magal (Bayit Yehudi) wrote a biblical reference on Twitter: “I have no problem if Arabs pray at al-Aksa, ‘because my house will be called a house of prayer for all nations.’ “However, unlike the Arab MKs who make provocations, Jews ascend quietly and respectfully, and if Arab MKs are allowed on the Mount, then I will go on it, too,” he added. “It is important to protect sovereignty and freedom of worship and oppose the apartheid that Arab MKs are trying to force, as usual.”