The Wakf is the branch of the Jordanian government that administers the Temple Mount and other Islamic sites in Jerusalem. 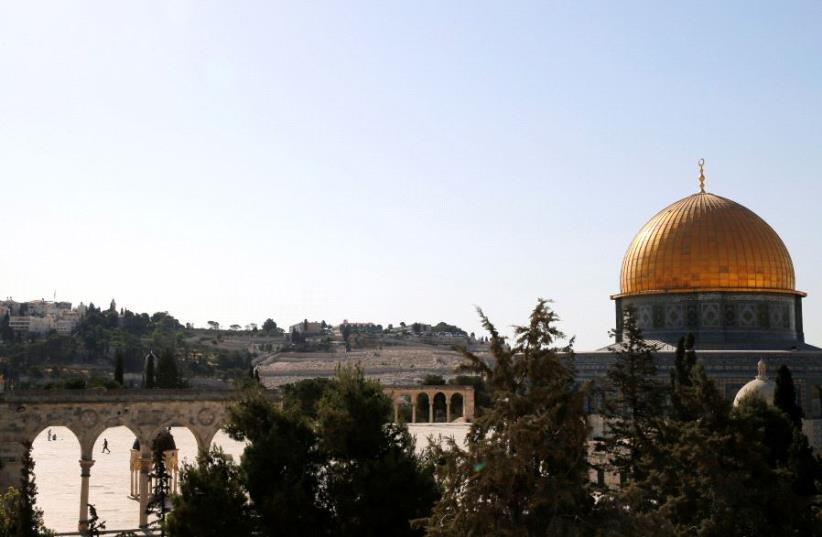 Israeli policemen secure the scene of the shooting attack at the Temple Mount in Jerusalem's Old City July 14, 2017.
(photo credit: REUTERS/AMMAR AWAD)
Advertisement
The Wakf Islamic trust instructed preachers and imams in Jerusalem not to deliver sermons in the city’s mosques on Friday and instead attend prayers adjacent to the Temple Mount, Wakf director Azzam al-Khatib said on Wednesday.“They will not deliver sermons in the mosques, but rather go to the blessed al-Aksa Mosque,” he said at a press conference. The Wakf is the branch of the Jordanian government that administers the Temple Mount and other Islamic sites in Jerusalem.The Wakf’s decision to order preachers and imams not to deliver sermons in Jerusalem’s mosques on Friday comes after Israel installed metal detectors on Sunday in front of the entrances to the Temple Mount.While the Wakf has rejected the metal detectors and called on Muslim worshipers not to go through them in order to enter the Temple Mount, the police have said the detectors are meant to ensure security and were put in place after weapons were found at the site.The police discovered a handful of weapons on the Temple Mount last weekend after closing the site for two days following a shooting attack near one of its entrances. The attack left two police officers dead.Muslim worshipers have heeded the Wakf’s calls not to enter the Temple Mount through the metal detectors and prayed for the fourth consecutive day on Wednesday adjacent to the site in protest.“The metal detectors are a part of Israel’s plan to slowly take over al-Aksa Mosque,” said Osama Aqabi, who hails from the Negev.Prime Minister Benjamin Netanyahu contests that assertion and has said his government has no intention to change the status quo on the Temple Mount.In the West Bank, Fatah organized a “day of rage” on Wednesday, with activists and locals participating in protests against the metal detectors.The largest protest took place in Ramallah, where protesters gathered in Yasser Arafat Square in the center of the city, waving Palestinian and Fatah flags.Fatah leaders, including Fatah Central Committee member Jamal Muhaisen, participated in the rally.Meanwhile, PA President Mahmoud Abbas cut short his trip to China on Wednesday and decided to return to Ramallah to lead an emergency meeting regarding the situation.“It is no longer acceptable to leave the situation as it stands,” Abbas’s spokesman, Nabil Abu Rudeinah, said in an interview on Palestine TV.According to Abu Rudeinah, Abbas has held urgent communications with China, the US and Arab states, asking them to intervene in order to prevent further deterioration in the situation in Jerusalem.“The ongoing events and Israelis measures in Jerusalem are escalatory and unacceptable... The Israeli side is trying to transform the conflict form a political one to a religious one,” Abu Rudeinah said.In addition to the police, Netanyahu has emphasized that the metal detectors are meant to secure the Temple Mount.Abu Rudeinah added that Israel “must calm the situation because the situation may become uncontrollable soon.”Ynet reported that senior Jordanian and Israeli officials are discussing ways to find a solution to tensions on the Temple Mount.According to the report, the officials are trying to reach a resolution before Friday, when tens of thousands of Muslims are expected to pray near the entrances to the Temple Mount.