The footage shows the plainclothes soldiers dressed as Palestinians drawing their weapons and then arresting three people.

By JPOST.COM STAFF
OCTOBER 7, 2015 18:17
Undercover forces arrest rioting Palestinians outside Beit El, near Ramallah ‏
Advertisement
A video released Wednesday, showed how undercover IDF soldiers dressed as Palestinians helped stop a riot outside Beit El, near Ramallah, in the West Bank. The footage showed the plainclothes soldiers drawing their weapons and then arresting three people. An Israeli military spokesperson said that around 350 Palestinian protesters hurled rocks and firebombs at the Israeli forces. They also rolled burning tires and aimed fireworks at troops, she said, adding that the troops reportedly heard shooting. 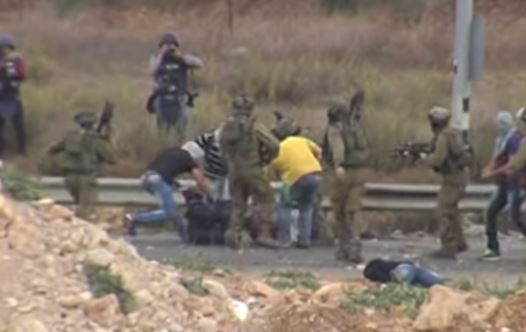 Undercover forces arrest rioting Palestinians near Ramallah ‏ (photo credit: PALESTINIAN MEDIA)
In response, the soldiers shot at several protest leaders, wounding at least two who received treatment by an Israeli medical team at the scene before being evacuated to Israeli hospitals in Jerusalem. One protest leader was arrested, she said.Palestinian witnesses said the violence was triggered by protesters who were angry over escalating tensions and the death of four Palestinians who killed or attacked Israelis in the past several days.
Reuters contributed to this report.