IDF places home village of terrorists in Wednesday's attack in Jerusalem under semi-closure. 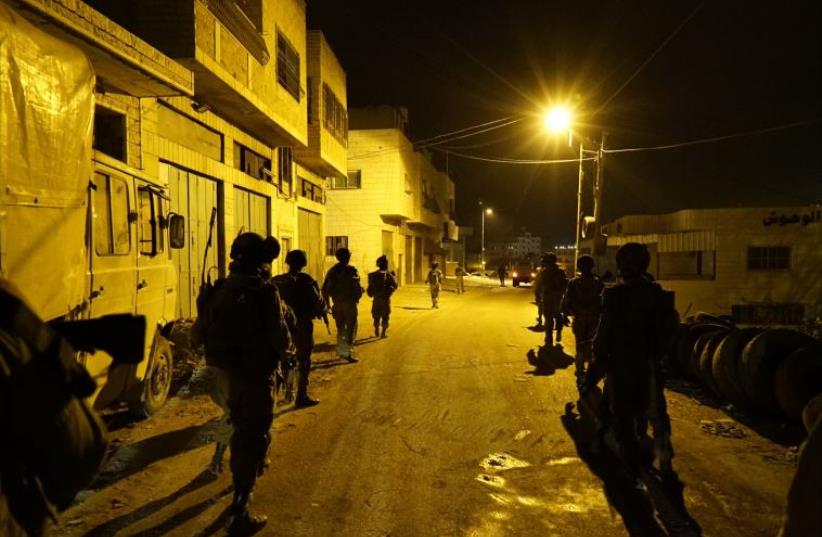 IDF Home Front Command Search and Rescue Brigade in the West Bank in recent days
(photo credit: COURTESY IDF SPOKESMAN'S OFFICE)
Advertisement
Security forces made a number of arrests in Kabatiya overnight between Wednesday and Thursday, operating in the West Bank village near Jenin from which three Arab terrorists launched a deadly gun and knife attack on Border Police officers in Jerusalem on Wednesday.The IDF has placed the village under a semi-closure, allowing all humanitarian goods and passage, but placing restrictions on ordinary movements by residents in and out of Kabatiya.IDF Engineering Corps units mapped out the homes of the three terrorists in the village ahead of their expected demolition.The three terrorists were identified as Ahmed Rajeh Zakarneh, Muhammad Ahmed Kmail, and Ahmed Najeh Abu al-Rub – all from Kabatiya.
Scene of Jerusalem attack
Prime Minister Benjamin Netanyahu convened top security officials Wednesday evening and decided to surround the terrorists’ home village and conduct arrests, as well as reinforce troops in Samaria. The security establishment, including the IDF and police were set to provide additional support for reserve forces previously mobilized in the West Bank. In the attack Wednesday at Damascus Gate in Jerusalem's Old City, a 19-year-old border policewoman was killed and another female officer critically wounded by the three Arab terrorists wielding machine guns, pipe bombs and knives.All three assailants were shot dead at the scene. Their explosives did not detonate and were later neutralized by a police bomb disposal team.Border Police Cpl. Hadar Cohen, 19, died of her wounds shortly after being rushed to Hadassah-University Medical Center at Mount Scopus. Her unidentified partner was seriously wounded and underwent emergency surgery there. On Thursday, the Jerusalem hospital treating the partner said her condition had improved to moderate. Police spokesman Micky Rosenfeld, who was at the scene, described the violence as a planned attack.Daniel K. Eisenbud and Jpost.com Staff contributed to this report.