The men were arrested as part of a raid that also netted the alleged 15-year-old perpetrators of a March stabbing attack against soldiers in Har Bracha. 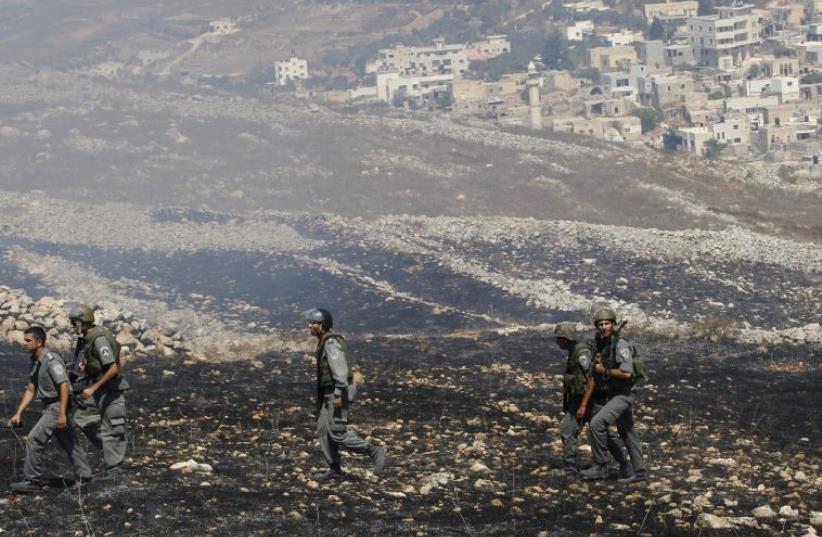 Israeli border police officers walk in the West Bank village of Burin, near Nablus
(photo credit: REUTERS)
Advertisement
Israeli security forces have uncovered a West Bank terror cell that allegedly plotted to kidnap a resident of the Har Bracha settlement in order to gain a bargaining foothold in negotiations to free Palestinian prisoners, the Shin Bet (Israel Security Agency) announced Tuesday.The suspects, residents of the village of Iraq Burin, near Nablus, were affiliated with the People's Front for the Liberation of Palestine (PFLP) and Hamas.According to the Shin Bet, the pair had already prepared a place to hide the proposed kidnap victim, as well as implements to restrain him. They also planned a stabbing attack and a plot to steal an IDF soldier's weapon, the Shin Bet said.The suspects, 30-year-old Sa'ad Husam Ahad Fakia and 25-year-old Malak Fatah Ismail Kadus, were arrested as part of raids to locate the perpetrators of a March 2 stabbing attack in Har Bracha in which two IDF soldiers were wounded.Two fifteen year-old suspects admitted to carrying out the stabbing, but Fakia and Kadus were also among those arrested, and their plot was uncovered, according to the Shin Bet.Kadus had also planned a shooting attack against IDF soldiers, as well as a stabbing plot that included the stealing of the soldier's weapon, the Shin Bet stated. A 14-year-old also allegedly admitted to being involved in these plots.The findings of the investigation into the suspects' activities will be passed on to military prosecutors in the coming days in order to prepare indictments against them, the Shin Bet said.