Mayor of Akraba says locals are “shocked and frustrated by this incident,” which he blamed on “settlers who entered the village from the southwest.” 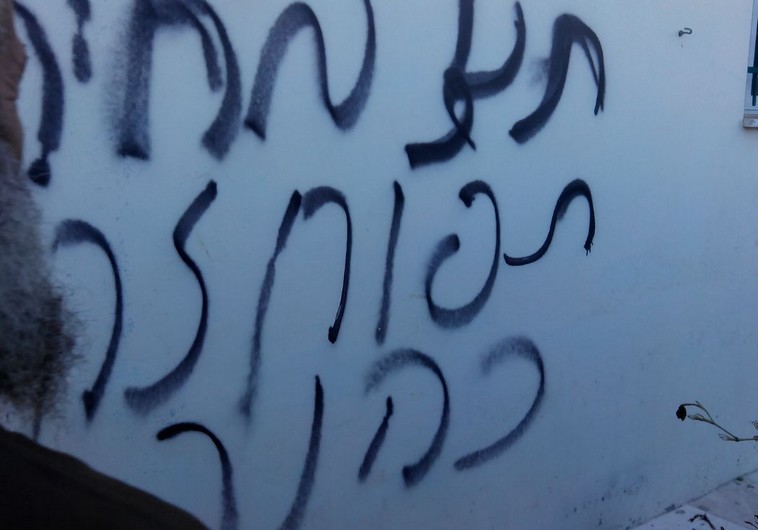 Price tag graffiti on West Bank mosque, October 14, 2014.
A mosque in a Palestinian village near the city of Nablus was torched and vandalized in a suspected “price-tag” attack overnight Monday.Pictures taken at the scene in Akraba showed serious fire damage to the ground floor, as well as graffiti reading “price tag” and “Tapuah is Kahane” – the latter an apparent reference to the nearby Jewish settlement of Tapuah and to Meir Kahane, the ultra-nationalist rabbi who was assassinated in New York in 1990.The word “Kahane” was misspelled, and the word “tag” appeared to have been written initially as “taz” in Tuesday pictures of the scene.Akraba Mayor Ayman Fouzi told The Jerusalem Post that locals were “shocked and frustrated by this incident,” which he blamed on “settlers who entered the village from the southwest.”He said the fire had been set around 2 a.m. and that locals had rushed to the scene and quickly put it out, preventing further damage or injuries.In July, a Palestinian field was set alight in Akraba in another suspected “price-tag” incident. Nearby, “revenge” and “price tag” were found spray-painted on a wall.Last week, in a field outside Nablus, two Israelis were arrested after allegedly attacking a group of Palestinians picking olives. One of the Palestinians, a woman, required medical attention after the attack.A spokesman for the Judea and Samaria District of the Israel Police said Tuesday that a contingent from the police’s Anti-Nationalist Crimes Unit had toured the scene in the afternoon, escorted by IDF troops. Police have opened an investigation into the incident and said they were probing all possible motives for the crime.“Price-tag” attacks are acts of violence or vandalism directed at Arabs, often as an act of protest against Israeli government policy in the West Bank.In a response to the attack on the mosque, which circulated widely on Israeli social media on Tuesday, Tapuah resident Yekutiel Ben-Yaakov said that if it turned out that Jews had carried out the vandalism, responsibility lay with the Israeli authorities who had destroyed houses illegally built by settlers in the area.“The police and Israeli authorities who destroyed the houses of the Hilltop Youth in Tapuah and expelled them from the area bear the responsibility,” he said.He added that “those who are opposed to ‘price-tag’ attacks must ask themselves if it makes sense to push these kids into a corner.”President Reuven Rivlin condemned the incident on Tuesday, saying that “burning holy places is terrorism and should be treated as terrorism – whether the crime was racially, religiously or nationalistically motivated.”He added that “in order to deal with this problem, we must first acknowledge the seriousness of the problem. We cannot continue to regard incidents like these as marginal. Rather, we must uproot them. All those who remain silent on such deeds are laying the groundwork for the next such attack.”The head of the Judea and Samaria Police District, Cmdr. Kobi Cohen, called the incident “very severe and an extreme act, whose purpose is to harm religious sensibilities.”He said the district would use all of the resources at its disposal to find those responsible.