Who are the creators of mysterious Ramallah signs in favor of one-state solution?

The signs, which surfaced at the entrance to Ramallah on Thursday, sparked a controversy in the Arab world and angered supporters of a two-state solution. The source of the posters remains a mystery. 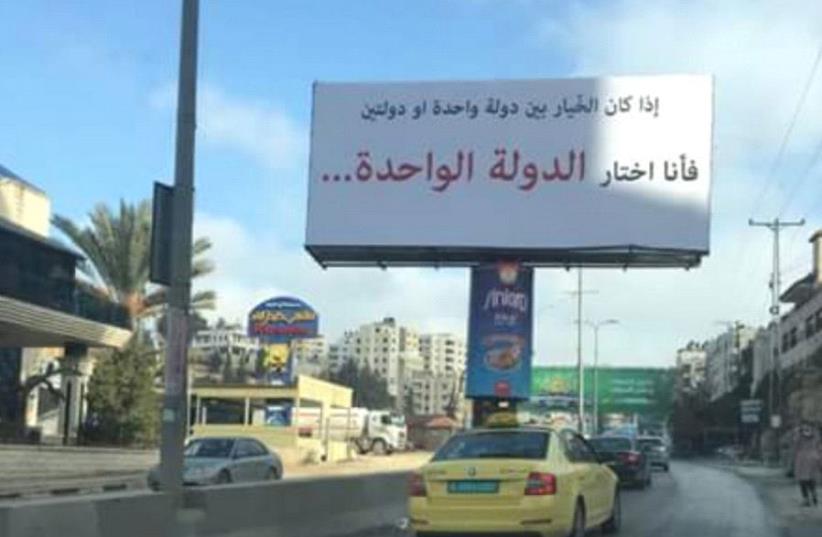 Sign in Ramallah calling for One State
(photo credit: SCREENSHOT FROM TWITTER)
Advertisement
Commuters into Ramallah were greeted on Thursday morning with signs bearing a strong statement regarding the possible resolution of the Arab-Israeli conflict. The signs, which boldly called for a one-state solution, read: "If the option is between one state or two states... Then the choice is one state."It remains unclear who created the posters in question, which were hung around Kafr 'Aqab, a Palestinian Arab neighborhood in east Jerusalem some 10 km away from Ramallah. Several speculations were raised throughout the day regarding the anonymous source of the signs. Ma'an, a Palestinian news agency, suggested that the posters were created by the "the people's movement [calling] for one democratic state on the historic Palestinian land."  According to reports, the signs were put up overnight in the early hours of the morning. Some claim that those who put up the signs picked the location carefully in order to provoke Israeli security forces; the village of Kafr 'Aqab is under the control of Israeli security forces, who will now be forced to go into the village to remove the signs, and may very well be welcomed by angry protesters. The signs sparked a heated debate on social media, with multiple Palestinians expressing their outrage and demanding that the signs be taken down immediately. Most of them referred to recent statements made by US President Donald Trump regarding the possibility of establishing an independent Palestinian state, and also referenced Prime Minister Benjamin Netanyahu's most recent comments, that did not quash the hope for a two-state solution. Twitter and Facebook posts that condemned the signs outside Ramallah said that such acts are unhelpful in promoting the cause of a Palestinian statehood, and that they actually sabotage the Palestinian leadership's attempts to gain recognition from world powers regarding the Palestinian people's right for a state of their own. This is not the first time that posters in the same vein were hung in the area to the dismay of many. The same incident occurred over a year ago, prior to the election of President Trump. Outraged supporters of the two-state solution argued at the time that the White House administration, with then-US Secretary John Kerry spearheading the negotiations between Israel and the Palestinians, will not continue rooting for the Palestinian cause if such acts as well as more extremist actions become widespread in the region.