Why did the defense establishment stonewall the security cabinet on certain aspects of the tunnel threat, such as the limited effectiveness of air strikes? 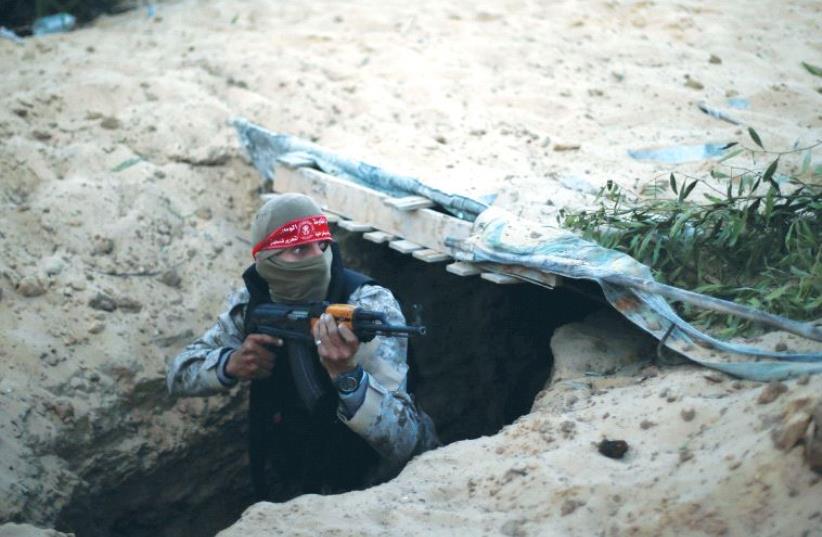 A PALESTINIAN TERRORIST climbs out of a tunnel in the Gaza Strip during a graduation ceremony in Rafah earlier this month.
(photo credit: SUHAIB SALEM / REUTERS)
Advertisement
An air attack on Hamas’s tunnels was never going to work, and the defense establishment knew it all along.As politicians try to portray State Comptroller Joseph Shapira’s 2014 Gaza war report as a battle – one between Prime Minister Benjamin Netanyahu and Education Minister Naftali Bennett over who is the better “Mr. Security” and who should lead the Right in Israel – that simple truth should not be lost.Cutting through the politics, the real battle over how Israel handled the tunnel issue during the war is between former defense minister Moshe Ya’alon and most of the defense establishment on one side, and Shapira, Bennett and the IDF’s former southern commander on the other.The central questions in 2014 for Ya’alon, former IDF chiefof- staff Lt.-Gen. Benny Gantz, former Shin Bet (Israel Security Agency) director Yoram Cohen and others were: Should we deal with the tunnels with air strikes or ground troops? How much information should we share with the security cabinet on the issue? The report reveals that, leading up to the war, top defense establishment figures were in near-unanimous agreement that air strikes would be ineffective in blowing up the tunnels and rendering them unusable.In fact, the main view was that air strikes might even make later attempts to fully eliminate the tunnels more difficult; impact from the strikes would not completely destroy them, but could impede ground forces entering and maneuvering inside them for that purpose.In joint meetings in 2013 – on January 31 and May 16 – Cohen told Netanyahu that air strikes would only be partially effective against Hamas’s tunnels.In a letter to Netanyahu on March 21, 2013, Cohen told the prime minister that Hamas showed a trend of returning and rehabilitating tunnels which were hit from the air.In a March 24, 2014, military intelligence memorandum, it was noted that an air attack on the tunnels was problematic.In summarizing conclusions from a June 30, 2014, defense establishment status meeting on Operation Brother’s Keeper chaired by Ya’alon, the defense minister said he “accepts the position that was presented not to use air strikes against... tunnels due to the limited value [of such an attack] and the damage which is liable to be caused.”Yet, when the issue was presented to the security cabinet on the eve of the war, all the security chiefs supported air strikes without even mentioning their prior reservations.Naftali Bennett even asked multiple times about whether air strikes would be effective on tunnels and his objections were rebuffed.How could this possibly be justified or make any sense? And how does attacking the comptroller for being “political” address this glaring contradiction? Netanyahu passed the buck, telling the comptroller it was complicated, but that, ultimately, he followed the recommendations of Ya’alon and Gantz.Ya’alon explained to the comptroller that the original purpose of attacking the tunnels from the air was not to neutralize them entirely, but to pressure Hamas into a cease-fire, without the need of sending ground forces into Gaza (as was done in the 2012 Gaza war).Gantz and the current IDF spokesman explained that air strikes were the best, or the only, available option in trying not to use ground troops.He added that the security cabinet knew the air strikes might damage the ability of ground troops to clear the tunnels later – though the ministers say they did not know this, and Shapira takes the ministers’ side on the issue.Curiously, Cohen is the only one who told the comptroller he had changed his recommendation, and the only one who said it was because the Air Force, until July 2014, said it had acquired new, better, and more useful capabilities for striking tunnels.In contrast, former IDF Southern Commander Maj.-Gen. Sami Tourgeman is on record as having been against using air power on the tunnels and wanting to go in with ground forces to deal with them from the start, since the IDF didn’t always get that opportunity. However, his concerns were raised within the army, and his superiors did not pass those concerns on to the cabinet.Meanwhile, Bennett was asking questions along the same lines of Tourgemon’s and the defense establishment’s earlier doubts, but was stonewalled by Ya’alon.The comptroller says – straight out – that Ya’alon and company messed up in deciding to use air strikes, and in not sharing their doubts with the security cabinet.This is the crux of the battle over the tunnels between Ya’alon, Gantz, the IDF and Cohen on one side and Bennett, Tourgemon and the comptroller on the other.In short, it appears the defense establishment stonewalled the security cabinet on certain aspects of the tunnel threat, such as the limited effectiveness of air strikes, because they wanted to delay or avoid a ground war at almost all costs – a war that Bennett thought was necessary from the start.