Will Rivlin meet Abbas in Belgium? 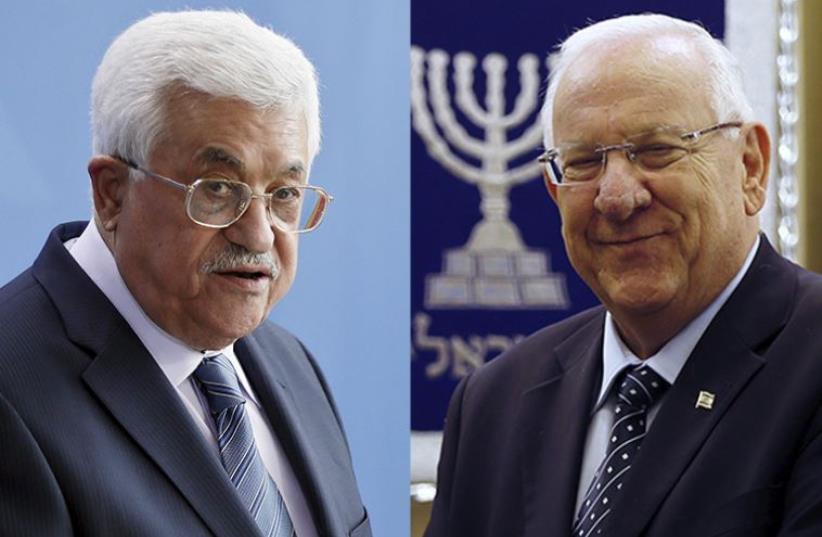 Rivlin and Abbas
(photo credit: REUTERS)
Advertisement
President Reuven Rivlin and Palestinian Authority President Mahmoud Abbas are both scheduled to address the European Parliament this week – Rivlin on Wednesday, and Abbas on Thursday. Rivlin is expected to talk about the need for confidence-building measures between Israel and the Palestinians, one of his pet themes when hosting foreign visitors.Since the start of his presidency two years ago, Rivlin has steadfastly maintained that Israelis and Palestinians are not doomed to live together, but rather are destined to live together.The two men have known each other for a long time, and Rivlin has publicly invited Abbas to resume peace talks as has Prime Minister Benjamin Netanyahu, who had a tête-à-tête with Rivlin last Friday.Rivlin and Abbas are meeting in the aftermath of the June 5 international meeting in Paris, which was convened to discuss ways of pressuring Israel and the Palestinians to get back to the negotiating table – with neither side being represented at the confab.A Rivlin representative confirmed on Sunday a report in Haaretz, stating that the five heads of four factions that together comprise nearly half of the European Parliament have warned against passage of the controversial NGO bill. That bill requires Israeli nongovernmental organizations to report sources of foreign funding, which they say could harm Israel’s relations with the European Union.In a letter to Rivlin, the five signatories – Gianni Pitella, president of the Progressive Alliance of Socialists and Democrats; former Belgian prime minister Guy Verhofstadt, who heads the Group of the Alliance of Liberals and Democrats for Europe; Philippe Lamberts and Rebecca Harms, co-chairmen of the Greens-European Free Alliance; and Gabrielle Zimmer of the Confederal Group of the European United Left – said that the bill introduced by Justice Minister Ayelet Shaked with the support of Netanyahu encourages attacks against human rights activists.The letter also stated that the signatories view Israel as “an important partner for the EU,” and emphasized that Israeli and European societies share common vision and values.The letter noted the European Parliament’s friendly relations with the Knesset, plus the ongoing cooperation with a wide range of Israeli civil society organizations.They expressed concern over reports of harassment and discriminatory action against some of these civil society organizations, and attempts to delegitimize the work of these organizations.In conclusion, the signatories asked Rivlin as a person strongly committed to democracy, fundamental freedoms and human rights to raise his voice against the NGO Bill, and to stand alongside civil society activists.During his four-day sojourn in Brussels, Strasbourg, and Antwerp, Rivlin will meet with King Philippe of Belgium, Prime Minister of Belgium Charles Michel, and Mayor of Antwerp Bart De Wever.The president will also meet with leaders of Belgium’s Jewish community at a private reception at the residence of Israel’s ambassador to Belgium.He and his wife, Nechama, will visit the Red Star Line Museum, which tells the story of the migration and immigration of different communities and minorities. While at the museum, Rivlin will meet with community leaders of different faiths.In a more official capacity, he will meet with President of the European Council Donald Tusk, President of European Parliament Martin Schulz, President of the European Commission Jean-Claude Juncker, High Representative of the European Union for Foreign Affairs and Security Policy Federica Mogherini, and Secretary-General of NATO Jens Stoltenberg.Shimon Peres, Rivlin’s predecessor, is also in Europe, again visiting with Pope Francis at the Vatican to discuss ways and means of overcoming terror and advancing peace in the Middle East.The meeting is a continuation of a June 2014 interfaith prayer session, in which the pope hosted Peres, Abbas and leaders of different faiths in the gardens of the Vatican.Peres was then in his final month of office, but once out of office, he continued with his peace initiatives, and was back at the Vatican in September of that year for a 45-minute session with the pope, whom Peres believes to be one of the most consensual religious leaders in the world.Peres is convinced that powerful religious leaders can exert more influence than politicians, and his discussions with the pope on Monday morning will focus on how religious leaders can influence vast populations to denounce terror and advance peace.