Will Trump speak of two-states in Bethlehem?

The topic has yet to be broached. 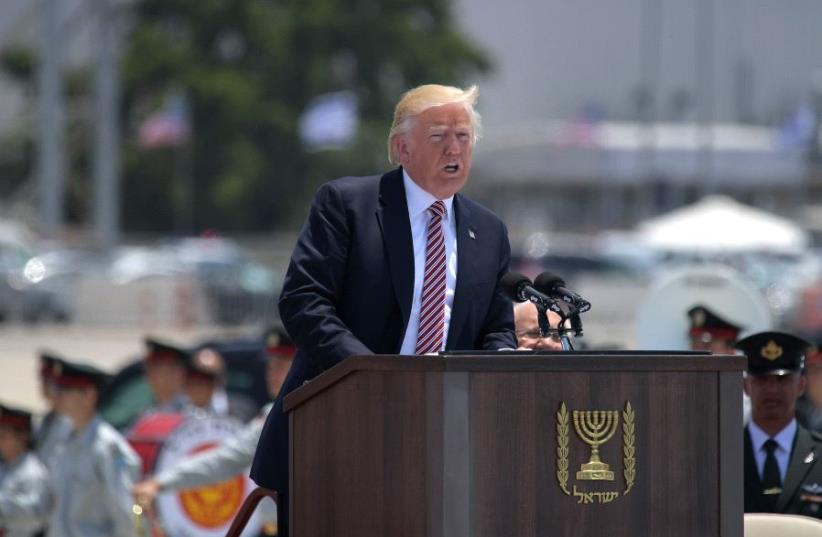 US President Donald Trump speaks during a welcome ceremony upon his arrival at Ben Gurion International Airport in Tel Aviv on May 22, 2017, as part of his first trip overseas
(photo credit: MANDEL NGAN / AFP)
Advertisement
Since taking office, US President Donald Trump has spoken of his desire to achieve peace between Israelis and Palestinians, but has not publicly stated his commitment to a two-state solution as the best way to resolve the conflict.In February, Trump famously told Prime Minister Benjamin Netanyahu, “I am looking at two states or one state, and I like the one that both parties like.”Since then, Trump has not spoken of two states or the Palestinian right to self-determination. Those two ideas were not even raised in the public statements Trump made at the White House during a joint press conference with Palestinian Authority President Mahmoud Abbas in April.
Trump-Abbas meeting in Washington. (Reuters)
Prior to Trump’s arrival in Israel, US National Security Advisor H.R. McMaster said that while he was in the Middle East, Trump would “express his desire for dignity and self-determination for the Palestinians.”Trump, however, has yet to make those declarations. When meeting with Prime Minister Benjamin Netanyahu at his residence in Jerusalem last night, Trump spoke of a “renewed effort at peace between the Israelis and the Palestinians.”He added, “It’s not easy. I’ve heard it’s one of the toughest deals of all, but I have a feeling that we’re going to get there eventually, I hope.”It’s presumed that the best place for him to acknowledge Palestinian self-determination would be in Bethlehem on Tuesday morning.The other words that have been absent from his public comments on the Israeli-Palestinian conflict are statements about the need for Israel to constrain settlement building. Similarly, the issue was not raised in any of Trump’s public comments in Israel on Monday.The two places where it could be raised today are in Bethlehem, and in the afternoon, at the speech he is scheduled to give at the Israel Museum.Abbas is scheduled to welcome Trump to the presidential palace in Bethlehem this morning, followed by a bilateral meeting. Around 10:40 am, the two leaders will hold a joint press conference.Trump will be the fourth US President to meet with the Palestinian Authority on Palestinian territory. Former US president Bill Clinton made four trips to Israel while in office, but it was only on that final visit in 1998 that he also went to the Palestinian territories to meet with Palestinian Authority Chairman Yasser Arafat. During that trip Clinton visited Bethlehem, and he remains the only US president to have visited Gaza.Trump will be the only one of the four US presidents not to visit the Church of the Nativity while in the biblical city. Both former US presidents George Bush and Barack Obama also visited Ramallah, where the Palestinian Authority seat of government is located. That city is not on Trump’s itinerary.