"Dividing the city is surrendering to terrorists," says one woman. 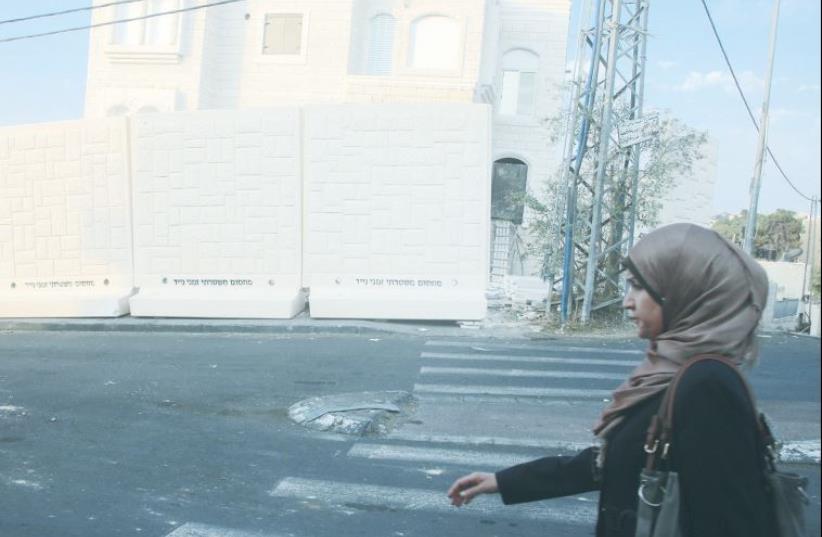 A WOMAN PASSES a section of the uncompleted temporary barrier being erected yesterday to separate the Jerusalem neighborhoods of Armon Hanatziv and Jebl Mukaber.
(photo credit: MARC ISRAEL SELLEM)
Advertisement
Amid vociferous debate over the geopolitical implications of erecting a concrete wall between warring Arab and Jewish communities in the capital, Jerusalem residents expressed strongly opposing views on Monday over whether the united model of the capital remains viable.Less than one day after the controversial 5-meter-high barrier was placed between Armon Hanatziv and Jebl Mukaber, which has become a hotbed for terrorism, a cross section of Israelis remained equally divided over the prospect of permanently separating east and west Jerusalem.  While Jerusalem Mayor Nir Barkat – who spearheaded the initiative four days after a deadly terrorist attack where the communities intersect – emphasized that the security measure is temporary, the debate has grown increasingly acrimonious.
Israel authorises sealing off East Jerusalem quarters in bid to quell violence
Indeed, human rights groups and left-wing politicians say that the separation represents a violation of Palestinian rights.Asked if the model of a unified Jerusalem has failed, Iris Millgram, a middle-aged Israeli woman, said that while the city has never truly been united, walling off Jews and Arabs should not be a consideration.“I don’t think that there is supposed to be a wall between us,” said Millgram, near Zion Square. “I think putting up a wall between two parts of the city is crazy because we work together, we are combined. I have Arab workers working for me in my house; it cannot be this way. They cannot live without us, and maybe we cannot live without them.”    Millgram contended that the violence would likely stop if Jews ceased visiting the Temple Mount.“I think that the Muslim Wakf should rule Har Habayit (the Temple Mount),” she said. “I don’t mind Israelis not going there, and I don’t think we should go there.”Avraham Zakaim, a high-end jewelry store owner on Ben Yehuda Street, who made aliyah from Iran in 1988, said the Torah explicitly forbids the division of the city under any circumstances.“I do not go against God,” he said. “God said do not divide Jerusalem – not me, not the president of the United States, not the prime minister of Israel, not the United Nations – nobody can talk about it.”Zakaim added that if Palestinians cannot live peacefully with Jews in Jerusalem, they have 23 other Arab countries in the region to choose from.“If they want to live in Israel in peace, they are welcome,” he said. “If they don’t, they can go to Mecca. They have 23 more countries, if they are not happy they can move. I was not happy in Iran, so I moved to Israel.”However, Dudu Cohen, a tour guide in his 60s wearing a yalmulka and tzitzit, said that the united model for the capital has failed, and must be changed.“I want the city to be united but I see that, in fact, it does not work,” he said. “There is a hatred here, and I don’t see us pushing out Palestinians from their homes, so the only solution is separation, like in Jebl Mukaber.”While Cohen noted that he knows many peaceful Arabs who want to be Israeli citizens, he said terrorists must be permanently cut off.“The government needs to make a poll and see how many terrorists come from any village, and then cut it off,” he said. “Those who do not want to be with us should go away.”Cohen asserted that the wall blocking Jebl Mukaber should become permanent, with more walls erected to block off other violent Arab neighborhoods.“If they don’t want to be Jerusalemites, then they shouldn’t be Jerusalemites,” he concluded. “I don’t need them here.”Or Israel, 20, who recently completed his IDF service, echoed Cohen’s sentiments.“This is the reality, and I don’t believe that [terrorists] are human beings,” he said. “They don’t have the right to be in Israel because it is our country, and the reality is sad because we need to live with them and they just want to see us dead.”Citing the pall that has fallen on the capital, Israel said that checkpoints should be set up at every Arab neighborhood where violence is endemic.“Every one of them should be searched before coming here,” he said. “You can see there is nobody in the streets, nobody walking at night, nobody eating at restaurants, so the solution is to separate.”Israel’s friend, Anna Golvhachov, 17, seconded his notion.“The city must be divided because the Arabs make problems for Jewish people,” she said. “They are killing and are violent. Walls should be put up everywhere there are [terrorists]. I don’t think there is any other solution.”Meanwhile, Emuna Belenky, a Jewish youth-group leader, said that dividing the city would be tantamount to “surrendering to terrorists.”“Jerusalem has been the capital of Israel for thousands of years, so it doesn’t matter if we’re in war because we’ve been in war many times,” she said. “This is not the first time, and it’s not going to break us.”“This is our capital, and it’s not going to be divided because the holy places are in Arab control now,” she continued. “No, it’s ours, and it’s going to stay ours.”Still, Belenky said if Palestinian residents choose to live peacefully, they should be welcomed to stay.“If they want to stay citizens in Jerusalem, they can, of course,” she said. “But they have to act like normal people and not stab [Jews] in the streets. If they don’t know how to act then they have to move somewhere else.”