Ya'alon: Many of our forces are working to catch the murderers

Defense minister visits scene of deadly shooting, is briefed by senior military and intelligence officials; "We are working to prevent next attack," he says. 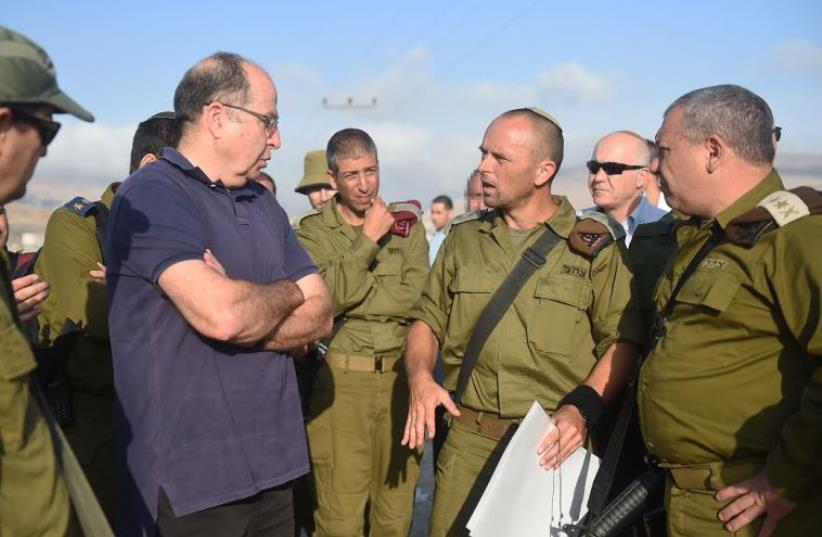 Defense Minister Moshe Ya'alon being briefed by security officials
(photo credit: IDF SPOKESMAN’S UNIT)
Advertisement
Large numbers of security forces are operating in Judea and Samaria to capture the terrorists who gunned down Eitam and Na'ama Henkin in front of their children, and to improve the security situation, Defense Minister Moshe Ya'alon said on Friday.Ya'alon visited the scene of the deadly shooting, near Itamar, and received briefings from IDF senior commanders and intelligence officials.He was accompanied by IDF Chief of Staff, Lt.-Gen. Gadi Eisenkot, and the Shin Bet domestic intelligence chief, Yoram Cohen."We are here on the ground with many forces that are operating - the IDF and the Shin Bet - to place our hands on the murderers," Ya'alon said."Sooner, I hope, and not later, we will place our hands on them, as we have done in past incidents. There is no doubt that this is a most severe incident. This is how we are treating it, and the actions on the ground are designed to prevent the next attack," he said.The current period is marked by an "eruption," Ya'alon stated, adding that "this is, and is not, linked to the Temple Mount. It is unfortunately being accompanied by incitement from the Palestinian authority, particularly, from the head of the Palestinian Authority." The violent atmosphere "leads to murders and the spilling of blood. Hence, we are acting against those who are responsible for the incitement, and I hope we are able to stabilize the security situation soon." IDF units are beefing up their presence in Judea and Samaria in order to provide a solution to these types of attacks, Ya'alon said. The forces are there to stop rock throwing attacks and firebombings, as well as shootings, according to the defense minister."I hope that this extensive activity will lead to a calming of the security situation on the ground," he said.Referring to overnight retaliatory attacks, in which suspected far right activists torched a Palestinian vehicle spray painted hate graffiti in a village near Ramallah, Ya'alon issued a call to the heads of the settlements, and to residents of Judea and
Samaria, to "act responsibly.""Violent acts like those that occurred yesterday are disruptive, also to the IDF, and they add fuel to the fire," he said.The defense minister received briefings from Operations Branch commander, Maj.-Gen. Nitzan Alon, the Central territorial Commander, Maj.-Gen. Roni Numa, the Judea and Samaria Division commander, Brig.-Gen. Lior Carmeli, and the Civil Administration commander, Brig.-Gen. David Menachem.He was also briefed by Samaria territorial brigade commander, Col. Shai Kleper.The IDF ordered four battalions to join existing military forces in the West Bank on Thursday in the wake of the terror attack.The order came following a security evaluation held by the IDF General Staff on Thursday night.The first of the extra units began arriving on Friday, to assist in searches for the terrorists and ensure IDF control of the area. Their mission also includes preventing a deterioration of the security situation.The main focus of this stage of the defense establishment's response will be on the intelligence front, a senior IDF said."There is certainly a change of atmosphere on the ground," he added.Additionally, the IDF will surround a number of Palestinian villages in the vicinity of the attack to help the hunt for the terrorists.
Advertisement
Subscribe for our daily newsletter