The incident will not cause a confrontation with Russia, former director of Military Intelligence said. 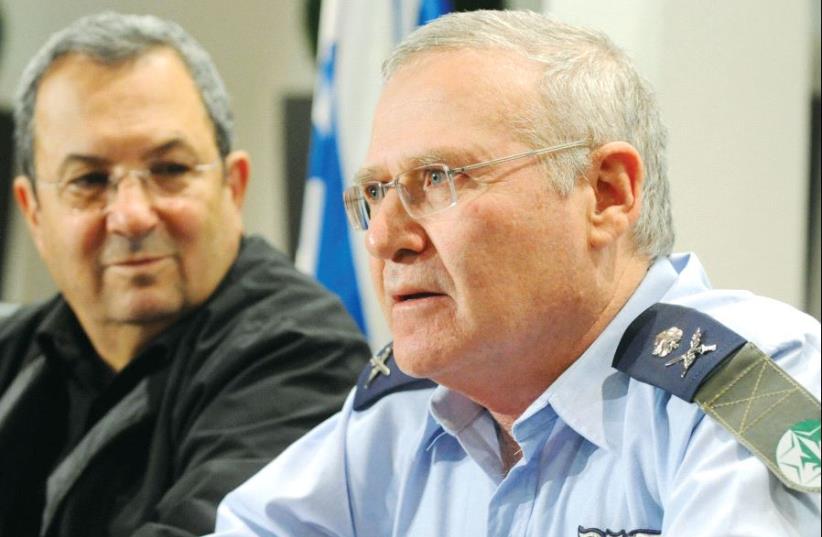 Amos Yadlin (right) with then-defense minister Ehud Barak at a press conference in 2009 in Tel Aviv
(photo credit: MOSHE MILNER / GPO)
Advertisement
If Israel carried out the air strike on an airfield near Homs Monday, it was motivated by a desire to combat Iran’s buildup of military capabilities in Syria and also to signal the Assad regime that its use of chemical weapons carries a heavy price, according to Amos Yadlin, head of the Institute for National Security Studies (INSS) and a former director of Military Intelligence.
Syria claims U.S. launched missile strike on air base; Pentagon denies it, April 9, 2018 (Reuters)
The attack, which was blamed by both Russia and Syria on Israel, came amid high tensions over a suspected Syrian chemical-weapons attack in the Damascus suburb of Douma that reportedly killed dozens of people and wounded hundreds. It was not immediately clear if and how the US would respond, but Washington denied responsibility for the strike on the T-4 airfield.Yadlin told The Jerusalem Post he could not confirm that Israel carried out the attack.“But if it’s an Israeli attack,” he went on, “the connection is two-fold. First of all, it’s connected to the strategic confrontation which INSS pointed to in December – that there is Iranian strategic determination to build advanced military capabilities in Syria. On the other hand, there is Israeli determination not to let this happen.”He noted that the Iranian drone that penetrated Israeli airspace in February had taken off from T-4.Reports that some of the 14 killed in the air strike were Iranian also inclined Yadlin to link the possible Israeli attack to the strategic confrontation over the building of Iranian military capabilities in Syria. nd although chemical-production installations were not directly attacked, nor were the Syrian personnel or aircraft that dropped the chemical weapons, the air strike might have been an Israeli response to that atrocity, he said.“I think that behind a particular action, there can be two different rationales that lead to the same action,” he stated. “There is the strategic rationale, to stop the Iranian entrenchment, and there is the moral rationale, to make a powerful statement that when you use chemical weapons you will pay a heavy price. There is no contradiction between the two; they go in the same direction.”Yadlin discounted for a variety of reasons the possibility that the strike on T-4 was an American attack.“The Americans denied it whereas usually they take responsibility. There wasn’t yet a deliberation in the [UN] Security Council, and maybe the Americans would want to take diplomatic action. Third, there is the speed with which Americans plan and carry out an operation. The Americans need more time to plan, approve and act than other forces that are already in the region.”YADLIN COULD not say whether Monday’s attack was the most significant air strike on Syria since the fighting started.“I’m not aware of all the attacks,” he told the Post. “There was a very significant attack, according to the Syrians, on a production facility on 7 September 2017. It’s too early to say it’s the biggest attack. But I don’t recall such a high number of casualties.”He said he does not think there will be Iranian or Syrian retaliation against Israel.“Until now, the Iranians and Syrians haven’t responded because they know that what Israel attacks is the illegitimate supply of weaponry to a terror organization like Hezbollah, and they have their own operational considerations. They have more important strategic targets [that Israel could strike], and if they become embroiled in a confrontation with Israel, these targets can be hit,” he said.“I think the Iranians and Syrians know that causing Israel to enter into a direct confrontation with the Assad regime can cause the collapse of all the ‘project’ of saving the Assad regime,” he went on. “There is no military or political actor today that can threaten the Assad regime – not the Turks, not the Saudis, not the opposition; the only force that can harm the Assad regime is Israel. Therefore, I think they will be very cautious, although you always have to be prepared that a particular attack will be the straw that broke the camel’s back and there will be a response. I imagine that if this was an Israeli attack, whoever took the decision also thought of the risk of a response.”Yadlin added that if Monday’s attack was Israeli, it should not necessarily be viewed as a one-off occurrence.“If the Iranians continue to build strength, advanced missiles, drones, Shi’ite militias – things Israel has said are unacceptable in Syria – then this won’t be the last attack,” he explained.He told the Post he doubted Monday’s attack would prompt a crisis with Moscow.“I don’t think it will cause a confrontation with the Russians,” he said. “They are not the enemy of Israel. We have a system to avoid clashes. They are not necessarily happy with the Iranian military presence. The Russians weren’t harmed [in the attack]. Chances of a confrontation with the Russians are very low.”Yadlin said that Assad had been emboldened to use chemical weapons by support he has been receiving from his allies, and because of US President Trump’s signal that American interests in Syria are limited to the defeat of ISIS and Washington will wind down its troop presence.“So Assad felt free to act,” he explained. “The most important thing now is that the Americans make clear to him that the chemical matter is of interest to them and that they have a moral obligation that it not recur. I am still expecting an American response.”