Choreographer Rami Be'er introduces what is perhaps his most visually striking work, which often simply takes your breath away with its overwhelming beauty.

By ORA BRAFMAN
JANUARY 18, 2010 07:18
The Kibbutz Dance Company's 'InfraRed'
(photo credit: Ora Brafman)
Advertisement
InfraRedKibbutz Dance CompanyHaifa AuditoriumJanuary 13The choreographer and artistic director of the Kibbutz Contemporary Dance Company (KCDC), Rami Be'er, based his latest creation, InfraRed, on a poem he had written and composed entitled In the black garden, which color-codes various actions by solders. Since in the past Be'er boldly confronted highly controversial political issues, one could have reasonably expected to find traces of the text in the movement. Fortunately, that wasn't the case.In that black garden, Be'er was enamored with the three primary colors and had a ball, producing what is perhaps his most visually striking work, which often simply takes your breath away with its overwhelming beauty. 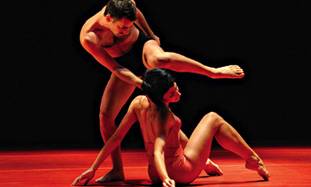 One haunting image was a sea of sand-colored silk, like dunes hit by a desert storm. With a change of the lights, the silky waves faded out and an iridescent red body packed in a paper cocoon was suddenly revealed.The KCDC never had a stronger group of dancers with such exceptional ensemble work. Be'er, often blamed for using a limited movement vocabulary range, has not only expanded his lexicon but refined it in many ways.Be'er has always designed the set and lighting for his creations, and InfaRed greatly benefits from his masterful craft and attention to visual details. On several occasions in the past, the dancing, it seemed, took a back seat to the overpowering objects and props, but in InfraRed, Be'er manages to find a gentle -although wobbly at times - equilibrium between dance and its supportive stage elements. The weakest element in this case was the cryptic collage of Alex Claude, which kept supplying music from various stylistic sources as background; since the inner logic of the work is fragmented, much like a string of free associations, there is no one component that holds the pieces together as cohesive unit.And there is that haunting text that accompanies the dance: "In the black garden / Red soldier-watches / Blue soldier warns / Yellow solder shoots / (Back against the wall).Obviously the sublime beauty and forceful text require reconciliation, and perhaps the key lays in Rilke's words - that beauty is but the beginning of the ghastly.
Advertisement
Subscribe for our daily newsletter