By MUTUALART.COM
AUGUST 22, 2010 09:47
dali painting 311
(photo credit: MutualArt.com)
Advertisement
“Why have forty years of prolific production by a major twentieth-century artist been pigeon-holed and under-analyzed for so many decades?” is what curator Elliott King seeks to answer in a new exhibition titled  Dali: The Late Work at the High Museum in Atlanta (through Jan. 9).The show groups an extraordinary collection of more than 100 artworks by the iconic artist—many never before seen in public-- and explores, for the first time, the diverse body of work that Dali created in the last forty years of his career. Reinventing himself during the 1940s, after his relationship with the surrealist movement turned sour largely due to his unabashed commercialism and disagreements with the group over politics, Dali used his art to visually explore science, psychology, and religion—as he often said, painting the subject matter of his time.King spoke to MutualArt.com about the show and described some of the artworks in the spotlight. MutualArt: Where did the idea for the show originate?
Elliot King: In 2005, the Philadelphia Museum of Art hosted an international symposium, ‘The Dali Renaissance’, which focused specifically on Dali’s art and writing after 1940. The symposium had been inspired by the Dali Centenary Exhibition in Venice and Philadelphia, honoring the artist’s 100th birthday, one of the major aims of which was the reassessment of his so-called ‘late’ work, long derided by art critics and historians. The proceedings of that conference were published in 2007. In 2009, the High's Director, Michael Shapiro, learned about ‘The Dali Renaissance’ and realized the subject’s potential as an exhibition. The High contacted The Salvador Dali Museum in St. Petersburg, FL, to partner on the project. The Dali Museum put the High in touch with me (I am an art historian specializing in this largely overlooked period of Dali’s work).What is special about Dali's late works that might surprise the audience? Are Dali's late works characterized by a particular medium, introduction of new media, themes?
An audience mostly familiar with Dali’s enormous moustache and antics or with his painting The Persistence of Memory will likely be surprised by the breadth and depth of Dali’s post-1940 work. Although many elements remained consistent in Dali’s art, including a meticulous attention to detail and polished finish comparable to the Old Masters, many of the later paintings are much grander in size and scale. The exhibition also demonstrates Dali’s experimentalism: his interest in optics, including stereoscopy; his enduring fascination with science; his more abstract and performative works; and his enthusiasm for new media, including video art, and later, holography.How did Dali reinvent himself in his work in his later years? Was there a specific event, experience that motivated him?
In 1939, Dali was expelled from the surrealist movement, largely for his unabashed commercialism and disagreements with the group over politics. In 1940, Dali and his wife, Gala, moved to America, where Dali was already a celebrity and by far the most recognized of the surrealist artists. One of the more curious poses, then, came in 1941, when he announced that he was no longer a surrealist but instead a ‘classic’ painter. The divide between ‘surrealist’ and ‘classic’ has largely defined Dali’s late career, though it is a separation that is vague and largely self-imposed. Indeed, questioning the substance of this re-branding is an important component of the exhibition’s theme. 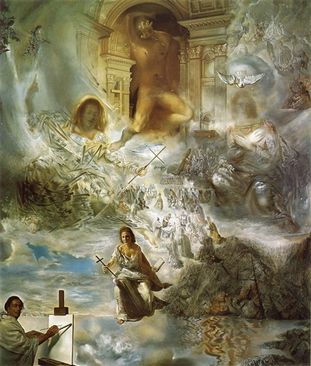 One major change in Dali’s work in the latter half of his career was his rekindled interest in religious subjects. Dali had been raised by a devoutly Catholic mother and atheist father, and much of his initial schooling was based in Catholicism. As an adolescent, Dali rejected religion – all the more so in the 1930s, when he affiliated with the vehemently anti-religious surrealists. In his 1942 autobiography, The Secret Life of Salvador Dali, the artist wrote that he was returning to Catholicism. In the same breath, however, he admitted that he did not have faith. This absence of faith would underscore much of his subsequent religious artwork.What works in particular have never been seen before? Where did these works come from?
One painting in the exhibition, Portrait of Mrs. Chisholm, has never been exhibited publicly; it comes from a gentleman in Cincinnati, and it is a portrait of his mother. Aside from this unique painting, many of the works in the exhibition have not exhibited in the US in nearly half a century: several paintings, including Saint Surrounded by Three Pi-Mesons (Fundacio Gala-Salvador Dali) and Galatee (private collection), have not exhibited in the US since the 1950s. The Madonna of Port Lligat from the Fukuoka City Art Museum in Japan has not exhibited in the US since its premiere at the Carstairs Gallery in New York in 1950; Santiago El Grande has not exhibited outside the Beaverbrook Art Gallery in New Brunswick, Canada since 1959; Assumpa Corpuscularia Lapislazulina, an important example of Dali’s ‘nuclear mysticism’, has not exhibited publicly since 1959; and The Christ of St. John of the Cross (Kelvingrove Museum, Glasgow) has not been in the US since 1965 and has not been included in a Dali exhibition since 1980.
Can you describe Dali's connections to artists of the 1960s and 1970s such as Andy Warhol, Roy Lichtenstein and Willem de Kooning?
The same “low culture” ventures and adamant figurative style that made Dali a target for critics in the mid-20th century would attract a fresh generation of Pop artists in the 1950s and 1960s, who saw in Dali an antecedent to their direct engagement with celebrity status and mass culture; Dali would even sit for one of Andy Warhol’s screen tests in 1966, used as a background for performances of the Exploding Plastic Inevitable. Warhol’s remark, "Making money is art, and working is art, and good business is the best art," might equally have come from the then-sexagenarian Dali, who by 1970 had amassed a fortune of approximately $10 million.The relationship between Dalí and Pop Art is a fascinating cross-pollination and has become one of the most convincing pillars for the “late” work’s reassessment. His 1958 painting, The Sistine Madonna – employing a dot-matrix based of an enlarged photograph of Pope John XXIII’s ear printed in Paris Match, onto which Dali has superimposed Raphael’s Sistine Madonna – was an antecedent to Lichtenstein’s Benday-dot paintings three years later, and to the enlarged mechanical reproductions filched from newspapers and magazines that would be used by artists including Gerhard Richter, James Rosenquist, Chuck Close, and Sigmar Polke. But it was not only Dali’s recent work that seemed relevant to Pop: the 3 Generations exhibition, hosted by the Sidney Janis Gallery, New York in 1964, presented Dali’s Illuminated Pleasures (1929) alongside works by Rothko, de Kooning, Pollock, Lichtenstein, and Warhol, forging an intriguing connection between Dali’s early photographic collage-paintings and contemporary art.What do you hope that viewers will take away with them after experiencing the exhibition?
Regardless of how much one knows already about Dali, this exhibition should expand that view and challenge certain assumptions one may have. Those who know Dalí mainly for his moustache and ‘melting clock’ painting will hopefully take away an appreciation for Dali’s inventiveness and the diversity of his oeuvre. Fundamentally, every viewer will hopefully leave questioning why forty years of prolific production by a major twentieth-century artist has been pigeon-holed and under-analyzed for so many decades.
Article provided by MutualArt.com - a personalized art information service covering thousands of sources across the web.
Advertisement
Subscribe for our daily newsletter