The First International Bank of Israel’s 2014 Culture and Community performance series opens on January 30 with a concert by celebrated kamanche player Mark Eliyahu and his Sands ensemble.

Kill Your Darlings is a film based on a true story about friendship, love and murder.
A murder in 1944 draws together three great poets of the Beat Generation: Allen Ginsberg, Jack Kerouac and William Burroughs.The film depicts the pivotal year that changed Ginsberg’s life forever and provided the spark for him to start his creative revolution. With Daniel Radcliffe, Dane DeHaan, Michael C. Hall.

MUSIC 2. BANKING ON CULTURE AND COMMUNITY The First International Bank of Israel’s 2014 Culture and Community performance series opens on January 30 with a concert by celebrated kamanche player Mark Eliyahu and his Sands ensemble.The free show – which will take place in the FIBI auditorium at 42 Rothschild Boulevard in Tel Aviv, at 8 p.m. – goes by the name of Back to the Source. Joining Eliyahu will be his father, internationally acclaimed tar player Piris Eliyahu. The concert marks the start of an ethnic music- based series that will feature material from Central Asia and the Mediterranean, with Western flavoring.

3. COASTING ON THE MUSIC This weekend at the Pastoral Hotel, the first installment of the 2014 Kfar Blum musical weekend series will take patrons across broad musical and genre terrain and through four decades of American popular vibes. The program kicks off with the Doo Wop Girls, who will take the audience back to the gay sounds of the 1940s with new renditions of doo-wop hits. The musical proceedings then move on to the Jukebox – Love Story show. Fans of The King will no doubt revel in the Elvis Lives program of Presley hits.Coast to Coast weekend participants will also have the chance to get out and about with a trip to nearby Kfar Giladi and the surrounding area.

4. CLASSICAL EILAT The 16th annual Isrotel Classi-Cameri festival will take place between January 29 and February 2, offering numerous chamber music concerts with the Israeli Chamber Music Orchestra, as well as a host of solo players from Israel and around the world. The rich program offers something for everyone and is always very entertaining.For more information about the program and the packages, call 1-800-800-808 or go to www.isrotel.co.il.THEATER 5. A FUNNY THING IS HAPPENING AT THE CAMERI Pseudolus (Shlomo Bar-Abba) is the ancestor of all the Clever Servants of classic comedy and the hero of A Funny Thing Happened on the Way to the Forum, Stephen Sondheim’s 1962 romp through the Roman comedies of Plautus (254-184 BCE).This Forum will certainly be one of the Cameri’s big hits. The cast includes Gadi Yagil, Rona Lee Shimon and Itay Tiran.Ongoing at the Cameri Theater. Some shows have English surtitles. www.cameri.co.il 6. STONES COME ALIVE Following a successful world tour, the Orto-Da theater group returns to Israel with Stones, a play based on Nathan Rapoport’s bronze sculpture The Warsaw Ghetto Uprising.The awardwinning play, a visual journey starting at the Shoa, has no dialoge; the actors portray sculptures that come to life.On the evening of International Holocaust Remembrance Day, Monday, at 8:30 p.m. at the Tzavta Theater, Tel Aviv. For tickets and more information: (03) 751-1136 or www.orto-da.com 7. DANCE MONTREAL IN THE MISHKAN 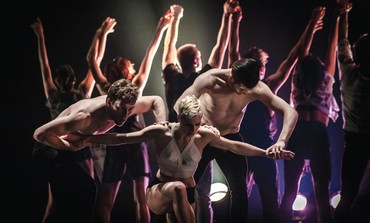 Les Ballets Jazz de Montreal returns to Israel as part of the Dance in the Mishkan series of the Israeli Opera. They will perform three works, two of which – Harry by Barak Marshall and Closer by Benjamin Millepied – were created for the company.The third one, Night Box, is a duet by Wen Wei Wang. One of the leading dance troupes in the world, they combine classical ballet with modern dance and jazz, and the result is energetic and entertaining.There will be four performances at the Opera House in Tel Aviv starting on February 4; one in Jerusalem on February 6; and one in Haifa on February 8. For tickets and details, go to www.israel-opera.co.il or www.bimot.co.il. 8. ETHNIC DANCINGA weekend of Ethnic Dance will take place at Hangar 2 in the Jaffa Port, starting tonight at 9. There will be many dance performances, such as flamenco, Oriental and Persian dance, as well as a symposium and a photography show.

ART9. COMMUNAL ART The Alfred Gallery is expanding its operations and launching the first Cooperative Institute in Israel: Alfred – Cooperative Institute for Arts and Culture. The institute will include such features as a large gallery space, studios for artists at accessible prices, and a space for lectures and workshops. At the opening event, the works of more than 100 artists will be offered for sale, and a catalog spanning eight years of operation will be launched.Opening event: January 30 at 8 p.m., 5 Chelouche Alley, Tel Aviv

MIXED 10. THE FINAL FRONTIER The Tel Aviv Port, together with the Israeli Space Agency, is holding Space Week at the port on January 27-31. The host of activities includes a photographic exhibition and interactive attractions such as the Google Glass and new computer games, as well as a workshop for people who want to learn about photographing space (January 30 at 11 a.m). Free entrance.

For a full program and details, go to http://most.gov.il/SLH/spaceweek
Advertisement
Subscribe for our daily newsletter