Israelis, Iranians set aside politics at the Oscars

Directors Joseph Cedar and Asghar Farhadi both say their nominated films have personal, not national themes.

By REUTERS
Joseph Cedar with Footnote poster 390
(photo credit: REUTERS)
Advertisement
As their nations warn of war, the Israeli and Iranian directors facing off at next week’s Academy Awards share a reluctance to see politics read into their movies, both of which are portraits of troubled families.Joseph Cedar, director of Israel’s Footnote, and Asghar Farhadi, maker of Iran’s A Separation, stress that their works are about human issues, not conflicted governments.Yet, even as the filmmakers put art before politics in competing for the Oscar in the foreign language film category, neither man can escape the fact that he hails from a country that is vigilant about its portrayal at home and abroad.Farhadi created his delicate, Golden Globe-winning divorce drama A Separation under Iranian censors, which impose strictures in the name of Islamic morality and national morale.Footnote, a comedy of errors about a father and son who are Talmud scholars locked in an acidic rivalry, has been remarked upon, and welcomed, in Israel for what it lacks – any mention of the military or regional enemies. 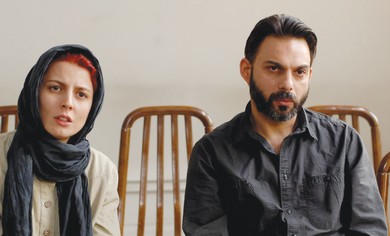 Cedar’s last movie, Beaufort, also was nominated for the foreign language film Oscar, but its depiction of Israeli troops under fire in Lebanon and the director’s anti-war rhetoric were denounced by some of his countrymen as defeatist.“I learned not to interpret my own films,” Cedar said.But he described Footnote as an examination of a debate central to Jewish scholarship, in an interview with Reuters.“The son is all about interpretation and commentary. The father is all about fact and verifiable empiric data. And sometimes I feel like the father, sometimes I feel like the son,” Cedar said.He shied from offering a metaphor to Israel itself, where pragmatism and ideology often clash and whose secular founding principles have been challenged by increasingly assertive religious minorities.“There is something about this film that has allowed lots of audiences to see something different,” Cedar said.Farhadi has been similarly reluctant to entertain theories that his film is a parable for the struggle between Iran’s young dissidents and its paternalistic mullahs, and he told Reuters it is up to audiences to take from the movie what they will.“I think in every story there are many hidden themes and it depends on which ones you choose to highlight. I included themes that mattered to me... and it depends on the viewer which of the themes emerge more strongly for them.”A Separation has earned critical acclaim around the world at film festivals and other events with its tale of an Iranian couple on the verge of divorce whose problems grow ever more complicated when other people become involved in their lives.When asked recently by The Washington Post whether one bedridden old man weighing in on the couple’s issues represents the state, Farhadi chided the reporter, “If you have a political discourse about him, you are belittling this character.”While Iran is notorious for its film censors – award-winning director Jafar Panahi was sentenced to jail in 2010 and banned from making films – it has remained cautious in its remarks about A Separation.“Sometimes we see those who run these festivals grant precious awards to films whose main theme is centered on the poverty and hardships of a country’s people,” Foreign Ministry spokesman Ramin Mehmanparast told Reuters after A Separation won its Golden Globe Award in January.“This should not lead our artists to ignore the glaring positive points and features of our nation, and instead illustrate the kind of things welcomed by such festivals’ organizers,” he said.Farhadi has acknowledged adopting a non-partisan tone to get the film made in Iran, but not because of problems with censors.“No, I wasn’t confronted with any censorship,” he told Reuters. “Some countries did ask me, in order to show the film, that I should change the film’s title from what it is right now and I didn’t agree.”Cedar said he had briefly met Farhadi and looked forward to seeing him again in the “cultural arena” of Hollywood’s Oscars.“Putting aside all of these geopolitical sides, it [A Separation] is a film that really raises the level of the whole competition,” he said.
Advertisement
Subscribe for our daily newsletter