Photographer Ron Gafni has a new exhibition and a book titled 'Israel – Seen from the Sky,' which shows the country as we never get to see it. 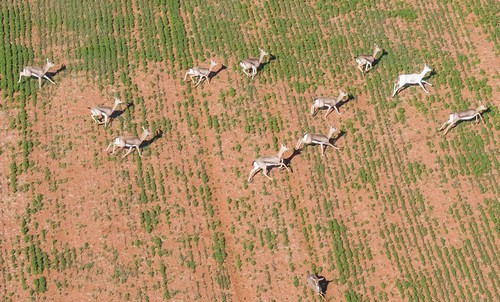 FILM 1. FIGHTING BACK The biting banter of ex-husband and wife Richard and Kate (Pierce Brosnan and Emma Thompson) suggests that the flames of their former relationship have not been totally extinguished. Unfortunately, the same cannot be said for their retirement nest egg, which is wiped out when Richard’s investment firm is defrauded. The divorced duo grudgingly agree to set aside their differences and hatch a plan to recover the retirement money that was stolen from them. The Love Punch is a classic comedy caper set against the sun-drenched backdrop of the Cote d’Azur.MUSIC 2. FROM MADRID TO BUENOS AIRESThe Alhambra Theater in Jaffa will host a culturally and geographically expansive program of musical works.The musical mystery tour will take in romantically flavored songs composed or made famous by veteran Spanish crooner Julio Iglesias, the vocal and instrumental Los Paraguayos ensemble and the celebrated Los Panchos trio. The five-member band that will perform in the show is headed by Buenos Aires-born vocalist Rafael Gal Gonzales (pictured), who hails from a tango-dancing family and first heard the sounds of Latin music as a child.May 9 at 8 p.m. For tickets and more information: (02) 535-6954 3. STADLER PLAYS BACH World-famous violinist Sergei Stadler will join forces with the Jerusalem Festival Orchestra for concerts at the Latrun Monastery and at St. John’s Church in Haifa.The Latrun concert will be devoted to works by Bach, including the Violin Concerto in D Minor, the Violin Concerto in A Minor, and the Concerto for Oboe and Violin. Dudu Carmel will be the oboist in the latter work. The Independence Day concert in Haifa will include a performance of Tchaikovsky’s Violin Concerto in D Major.Tuesday at noon at the Latrun Monastery and May 10 at noon at St. John’s Church in Haifa. For tickets and more information: (02) 535-6954 4. DRUMMING THE GUITAR Guitarist Andy McKee will demonstrate his singular approach to playing the guitar at concerts at the Zappa club venues today and tomorrow. McKee, who has some drumming experience on his résumé, plays several members of the guitar family, including the deeper baritone guitar and the weirdly shaped sonically expansive harp guitar, which has an elongated body and an extra set of six strings.For tickets and more information: (03) 762-6666; *9080; and www.zappa-club.co.il DANCE 5. TADMOR’S JUBILEE DANCE Dancer and choreographer Ido Tadmor recently turned 50. He will mark the landmark birthday with a festive show at the Suzanne Dellal Center in Tel Aviv as part of this year’s Tel Aviv Dance Festival.Tadmor is the artistic director of the Israel Ballet. He was recently invited to perform with the famed Bolshoi Ballet company in Russia. The birthday show will feature an international roster of leading dancers, including Bolshoi Ballet dancer Marianna Ryzhkina, with whom Tadmor will perform a duet, and members of the Israel Ballet. The program includes various works that Tadmor has choreographed.May 9 at 10 p.m. For tickets and more information: (03) 510-5656 and www.suzannedellal.org.il ART 6. EMBROIDERED WORK Artist Batya Shani’s “Embroidery” exhibition opens today at 11 a.m. and will run until May 17. The show is Shani’s salute to New York-based artist Charles LeDray’s miniature sculpted creations in stitched fabric, carved bone and wheel-thrown clay. The centerpiece of the exhibition is a large metal cage suspended from the ceiling that contains miniature dresses made of cloth and paper that Shani sewed together. The show also includes embroidered texts that pose thought-provoking existential questions.Until May 17 at the art space at 69 Rothschild Boulevard, Tel Aviv. For more information: www.rothschild69.co.il.7. A BIRD’S-EYE VIEW Photographer Ron Gafni has a new exhibition and a book titled 'Israel – Seen from the Sky,' which shows the country as we never get to see it. Gafni is a pilot and loves to photograph Israel from a bird’s-eye view.The exhibition is on display until the end of May at Ammunition Hill, 5 Zalman Shragai Street, Jerusalem. Sun.-Thur .9 a.m. to 5 p.m., and Friday 9 a.m. to 1 p.m. Free admission.The book, translated into five languages, costs NIS 80. For more information, go to www.skypics.co.il.8. TOURS THE 1948 PATH KKL/JNF organizes many guided tours around the country for Independence Day. One of the tours will follow in the footsteps of the War of Independence warriors who fought to open the way to Jerusalem.The three-hour walking tour for families extends from Har Adar to Kiryat Anavim.There will be a bus to the starting point and many scenic stops along the way.Tuesday at 10 a.m. Free, but pre-registration is required. Call 1-800-350-550.9. FOLLOW THE PILGRIMS Beit Shmuel is offering a tour in the footsteps of the pilgrims to Jerusalem, led by Ofra Regev. Following the travel diaries of famous pilgrims, the tour will take participants through the religious sites of the Old City, starting at Jaffa Gate. Come dressed appropriately. NIS 89.Tomorrow at 10 a.m. For more details and tickets, call (02) 620-3461.10. DOMESTIC WINERIES FESTIVAL The sixth annual festival for domestic wineries takes place on May 16 from 10 a.m. to 3 p.m. and May 17 from 10 a.m. to 6 p.m. The festival is hosted by Sorek Winery, whose wine-making school, one of the best in the country, has introduced hundreds of students to wine-making. This also marks the 20th anniversary of the founding of Sorek Winery.The festival is a showcase for all those who make wine with passion and individuality on a private basis. There will also be food, olive oil, cheese and liqueurs.The festival will take place at Sorek Winery in Kibbutz Nahshon. Admission NIS 65.